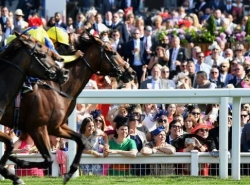 The premier five-day race meeting in the world is the Royal Ascot meeting, and this is the place to find Royal Ascot betting odds. Royal Ascot, near London, England, boasts 36 rich stakes races which begin in mid-June. There are eight Group 1 contests that take place over just five days. The highlights are the King’s Stand Stakes for sprinters, the Queen Anne over a mile, the St. James Palace Stakes for three-year-olds, and the Gold Cup for older horses running over a marathon route of ground. These are some of the most important horse races in the entire world.

The odds for the 2021 Royal Ascot are currently unavailable. The event is due to take place from Tuesday, June 15 until Saturday, June 19. We will keep this page updated as often as possible to ensure our readers have the latest information. This page was last updated on September 15, 2020:

To find the best Royal Ascot odds, you need to look to Royal Ascot online betting. These online sportsbooks will not only offer great odds, Royal Ascot betting guides, and promotions, but there are chances for bonuses and cashback offers. Do your research to pick the one that works for you, and plunge in on betting the biggest race meeting in the world!

Some of the betting outlets offer special perks like money back guaranteed and doubling your first deposit. Some of the most popular sites are Bovada, BetNow, BetOnline, and My Bookie.

Because so many of the Royal Ascot entries are familiar and popular runners, the Royal Ascot races often offer a lot of value with horses in form or improving at longer odds than they should be. Turn this information to your advantage to place your bets with the knowledge that crowd favorites can sometimes go off much lower than they should.

Royal Ascot is famous for its pageantry and flair. Each day of the meeting begins with the arrival of Queen Elizabeth, with many bettors going as far as wagering on what color outfit the Queen will be wearing. From there, it’s time to place your Royal Ascot best bets!

First, use the horse’s number rather than their name when placing your bet. You will need to know how much you want to bet, the type of bet, and the number of the horse or horses involved in the bet.

When betting a horse to win, the horse has to cross the finish line first. Betting to place means the horse has to finish first through fourth, depending on the number of runners. Betting each way means that you can bet to be first or second. Picking a “first two” bet means that you pick the first two horses in order. There is the same bet for first three, as well. The Royal Ascot odds are displayed based on a £1 minimum bet.

The opening day card, which takes place on a Tuesday, includes seven stakes races. They are the Buckingham Palace Handicap, the Group 1 Queen Anne Stakes, which is part of the British Champions Series, the Ribblesdale Stakes (G2) over 1 ½ miles, the King Edward VII Stakes (G2) for three-year-olds, the Group 1 King’s Stand Stakes, also part of the British Champions Series, the Duke of Cambridge Stakes (G2) over a mile, and the day concludes with the Ascot Stakes for older horses over 2 ½ miles.

Later on in the Royal Ascot meeting are the Norfolk Stakes (G2) for two-year-olds, the Diamond Jubilee (G1) for top sprinters, and the rich Prince of Wales’s Stakes (G1) for older runners. Often the races are held with European, Australian, and American-based runners all racing together. Shipping is from America has gained more prominence with wins from trainers like Wesley Ward and Canadian-based trainer Mark Casse, who brought the great mare Tepin to take the 2016 Queen Anne over the males. Most recently, horses from Japan have started racing as well.

One of the closing big races is the Gold Cup (G1). Royal Ascot Gold Cup betting begins the Thursday or Friday of the meet depending on the placement of the race. The trophy for the marathon Gold Cup is often presented by Queen Elizabeth herself.

Pay attention to horses owned by the top outfits, such as Godolphin and Coolmore. They win most of the races, and it is difficult to beat them. Sometimes the hardest part is knowing which entry from Coolmore is the one to bet on because they are so close in ability!

Racing at Ascot began in 1711, but the true week-long meeting at Royal Ascot first started in 1911. English racing has long been known for the Royal connections from Buckingham Palace, hence the name of the meeting. Formal dress including top hats for men and headpieces for women are required for spectators, even for tourists without access to premium seating. The Royal Enclosure is where the Royal family and special guests of honor can visit to view the horses before each race. This major social event often draws more coverage for its fashion and style than the races themselves, despite Royal Ascot betting being such a major part of the experience.

Top trainers from all over the world covet a victory at Royal Ascot in front of the Queen and the Royal family. John Gosden, Aidan O’Brien, and Charlie Appleby have the most success at Royal Ascot, with Mark Johnston, William Haggas, Richard Hannon, Andrew Balding, and Sir Michael Stoute also regular names in the winner’s circle. Pay attention to how the trainer’s horses are doing early in the meet and bet on the same trainer later in the meet. Often when a barn gets good, all of the horses start flourishing.

The Ascot track is shaped like a triangle, with two straightaway spokes that allow for one-mile and six-furlong races to be run straight without any turns. The course includes uphill and downhill portions designed to test the stamina of the greatest of horses. Ryan Moore, Frankie Dettori, and William Buick are the top jockeys in Europe, but James Doyle, Oisin Murphy, and Andrea Atzeni have also won their share. All of their mounts need to be examined before placing your Royal Ascot bets because they will often have an impact on the race and cannot be left out. They also have more experience on the track compared to newer or overseas riders.

Also, be aware of both the draw – where the horses are breaking from – and the pace of the race. Some riders and horses do better on the lead, but if the pace is too fast the front runners will crumble and leave room for the closers. In the United Kingdom, the real running of the race does not start until just before the end, whereas in America the horses go as fast as they can for as long as they can. Watch for horses and jockeys that can time their late run perfectly to run down the leaders.

Prize money at Royal Ascot is over £3.6 million. The complete schedule in race order is as follows, with their Breeders’ Cup implications, so that you can make your best bets at Royal Ascot for the most profitable betting experience of your career.