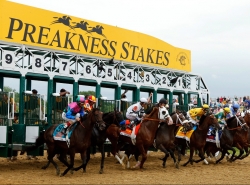 This is the place to find Preakness betting odds for the second jewel of the American Triple Crown. The Preakness Stakes is one of the major horse races of the annual calendar in the United States. It is run over 1 3/16 miles for three-year-olds with a purse of $1 million.

The 2020 Preakness Stakes (G1) was delayed from May until October 3. It is slated to feature a clash between Kentucky Derby winner Authentic and Belmont Stakes hero Tiz the Law. Other horses pointing for the race are Ny Traffic, Sole Volante, and Art Collector, who missed the Kentucky Derby with a minor injury.

The odds for the Preakness Stakes are now available. The odds are subject to change, as such we’ll ensure to keep this page updated accordingly. This page was last updated on September 13, 2020:

The Triple Crown trail takes sports fans to Baltimore, Md., two weeks after the pandemonium of the Kentucky Derby. The Preakness Stakes line up is set 72 hours before the race, which in 2020 is on October 3 after the race was delayed due to the COVID-19 pandemic.

Typically, the Kentucky Derby is held every year on the first Saturday in May. So, the Preakness Stakes at Pimlico Race Course is contested about mid-month.

The field for the second jewel of the Triple Crown will be much smaller than the 20 three-year-old thoroughbreds who partake in the Run for the Roses. Those seeking racing glory will leave Churchill Downs and head about 600 miles east to Pimlico for what’s also called the Run for the Black-Eyed Susans.

First held in 1873, the Preakness was named by a former Maryland governor after a winning colt at Pimlico. Attendance for this major racing event ranks second in North America, only surpassed by the Derby. Attendance at the event is second highest in the country following the Kentucky Derby and is even more than the Belmont Stakes or Breeders’ Cup. The party in the infield is often a raucous and entertaining event with live bands.

Secretariat holds the Preakness track record of 1:53, which he set in 1973. And, like the Derby, all of the horses will carry 126 pounds in the $1 million event — the shortest of the three Triple Crown races at 1 3/16 miles, about 100 yards less than the Kentucky Derby.

The winner of the Kentucky Derby is always given a special stall in the “Stakes Barn” at Pimlico, which is where all the Preakness starters are housed unless they are local Maryland-based runners. The Derby winner stands in the very first stall with a plaque of names of the other Derby winners who have stood there above the stall. It is considered an honor to be housed in that stall.

The Preakness Stakes does not draw the betting handle like the Derby since the field is much smaller. The number of starters is restricted to 14 horses, although fewer than that often enter the starting gate. The program for the Preakness Stakes will list the horses from No. 1 on out based on the post position draw earlier in the week, taking place the Wednesday before the race. The post-position draw and Preakness Stakes morning line odds are set at the same time, and the horses’ connections gather around to hear the announcement of who is in the race and where they will break from the gate.

When looking at the program or past performances for the Preakness, beside each horse’s name are the pedigree, owner, breeder, trainer, and jockey. The information also includes past race charts, win/loss records, and career earnings. There is also information on if the horse has run over the track or distance before.

Some important angles to look for when trying to pick the winner include top jockey, top trainer, recent performances, post position, and track condition. The runner’s history at Pimlico and in Grade 1 company should also be a consideration.

If all else fails, you can always go with your lucky number or the name that appeals to you the most.

Preakness Stakes online betting is an important part of your annual wagering plans. Betting on the Preakness today can be done online with these top online sportsbooks. Pimlico isn’t the only site for wagering. There are many off-track venues throughout the U.S., Las Vegas sportsbooks — like the Bellagio and Palazzo — or online gaming sites such as Bovada, BetUS, XBet, GTBets, or Betonline.

There are several available bets on the Preakness wagering menu. The win, place, and show bets are common bets to place on any horse race. A win bet is exactly that — pick the winner of the race. To cash a place ticket, your horse must finish first or second. To cash a show ticket, your horse must finish first, second, or third. The payoffs on winning tickets are based on a $2 bet.

In 2014, another Kentucky Derby champion, California Chrome, went off at 1-2 in the Preakness. That means a $1 profit was made on every $2 bet on the overwhelming favorite that day. For example, on a $200 bet on California Chrome, the winning ticket returned $300 ($200 originally bet, plus $100 profit).

Legendary trainer Bob Baffert has won the second jewel of the Triple Crown a record-tying seven times. R. Wyndham Walden is the other trainer holding that record, from 1875 through 1888.

Knowing the Preakness jockeys and trainers can help you make a good wager. Track condition often plays a role at the Preakness as well, with the track often turning up muddy and wet due to weather. That can help horses like Exaggerator, who splashed home in the slop in 2016. Some horses don’t like the slipping of a muddy track, so keep an eye on the weather and their performances over previous wet tracks in their lives.

The Preakness Stakes meeting is usually run over three days, with stakes races increasing in stature and purse through the Saturday races. In 2020, all the races will be run on a single day. There will be a staggering 11 stakes races on the card, 10 in addition to the Preakness itself, and they are as follows: