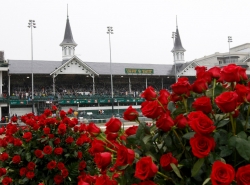 Kentucky Derby Betting Odds will be available closer to the date of the race, which is May 1st, 2021. The famous 1 1/4-mile contest under the Twin Spires at Churchill Downs features the best three-year-old horses in the land, all competing for immortality and the chance to wear the garland of red roses in the special Kentucky Derby winner’s circle.

The odds to win the Kentucky Derby in 2021 aren’t yet available and are subject to change. As the day of the event approaches, there will be movements in the markets, so keep checking back with this page for the latest info! The odds were last updated on September 8, 2020:

Betting on the Kentucky Derby

The Kentucky Derby is the most iconic horse race in North America, and perhaps the world. Betting on the Kentucky Derby is a rich affair with the biggest pools in the country all year. Twenty of the best three-year-old thoroughbred horses head into the Churchill Downs starting gate every year on the first Saturday in May. When the gates spring at the Kentucky Derby post time, around 6 pm Eastern, the crowd of 160,000 strong roars in anticipation.

The Kentucky Derby, held annually in Louisville, Kentucky, started in 1875. It’s the first leg of the Triple Crown and carries a purse of $3 million. The prestigious race is often called The Run for the Roses for the lush blanket of 554 roses draped over the winner. It is also known as the “Most Exciting Two Minutes In Sports” in reference to the time that it takes the winner to complete the race.

The race isn’t the only attraction at Churchill Downs on Derby Day. The event is also known for mint juleps (an iced drink consisting of bourbon, mint, and sugar syrup), women wearing large, elaborate hats and a packed infield jammed with spectators who are hoping to be lucky to catch a glimpse of the action.

Kentucky Derby live odds are available closer to the race, and on race day you can find Kentucky Derby current odds via your favorite sportsbook. Make sure you know that being present at Churchill Downs isn’t the only way to wager on the Kentucky Derby. There are many online gaming sites such as Bovada, BetNow, or Betonline. We review the best online betting outfits here. These venues all offer similar options for wagering on the historic race.

This is the best betting race of the year. With 20 horses in the field, it’s unlikely to have a prohibitive favorite. Payoffs on the winners are often generous with a large number of betting options. In 2020, third choice Authentic won the race at 8-1, paying $18.80 to win. Since 2000, six favorites have won. There have also been two 50-1 winners, Giacomo and Mine That Bird. These kinds of tricky results make the Kentucky Derby the best betting race.

The Kentucky Derby wagering menu is as follows:

Win, place, or show: These are common bets to place on any horse race. A win bet is exactly that — pick the winner of the race. To cash a place ticket, your horse must finish first or second. To cash a show ticket, your horse must finish first, second, or third. The payoffs on winning tickets are based on a $2 bet. In 1973, Secretariat won the Kentucky Derby and eventually the Triple Crown. His odds were 3-2 on Derby Day, meaning a bettor made a $3 profit for every $2 bet on the superstar racehorse. For a $200 wager to win on Secretariat, the return was $500 ($200 bet plus $300 profit).

How to Pick the Kentucky Derby Winner

Besides each horse’s name in the program are the pedigree, owner, breeder, trainer, and jockey. The information also includes past performance charts and won/lost record. Some important angles to look for when trying to pick the winner of the Kentucky Derby include top jockey, top trainer, recent performances, post position, and track condition. The runner’s history on the track at Churchill Downs is also a consideration since the deep, dirt track is different from many other surfaces across the nation.

These are all important statistics, but a good percentage of the Derby is based on racing luck. With such a large field, it’s easy for the race not to go according to plan. Some racing fans will just stick with their lucky number or an appealing name.

The Kentucky Derby is special because it is the only race in America that offers three clear rounds of Kentucky Derby future wagering. Bettors can select their picks to win the Kentucky Derby months in advance, and enjoy large payouts if they are correct. This is especially a good wager with a horse who breaks its maiden in January or February and hasn’t yet proven itself in stakes company, meaning they will have longer odds.

The favorite has won six of the last eight Kentucky Derbies, but don’t think the most popular pick in the race is automatically destined for the winner’s circle. The Derby has been run annually for 146 years. From 1979 to 2012, the favorite only won four times. That means that in 29 of those races, those wagering on the safe bet walked away with nothing.

One of the most anticipated events of the week of the Derby is the post position draw. Trainers and jockeys aren’t thrilled to draw the rail or outside 20 posts, but another spot is even more feared. The one post that has never had a winner since the race implemented the starting gate in 1930: the “dreaded” post number 17.

It’s always a good idea to consider who the top trainers and jockeys have in the race. The best trainers include Bob Baffert, who has won the Kentucky Derby a record-tying six times, Todd Pletcher, and Doug O’Neill. Top-notch trainers such as Steve Asmussen, Brad Cox, and Chad Brown are still looking for their first Derby victories. The best riders include John Velazquez, Mike Smith, Javier Castellano, Julien Leparoux, and Florent Geroux.

To line up in the Kentucky Derby, a horse must qualify for the race through a series of prep races called the “Road to the Kentucky Derby.” The series features races starting with the two-year-olds and extend through the spring of the three-year-old season. The points are on a graduating scale depending on when the race is run and only the twenty horses with the most points earn a spot in the starting gate for the Run for the Roses. In 2020, 20 horses did not want a spot in the race, so the chase for points became a moot point for the first time in decades.

Major Kentucky Derby prep races include the Santa Anita Derby (G1) at Santa Anita, the Wood Memorial (G2) at Aqueduct, the Florida Derby (G1) at Gulfstream Park, the Arkansas Derby (G1) at Oaklawn Park, the Blue Grass Stakes (G2) at Keeneland, and the Louisiana Derby (G2) at the Fair Grounds. The winners of these races are always able to get a spot in the Derby, while others who finish second or third rely on defections or points earned from other races. Only the top 20 points holders get in, or less if a horse wants to make the trip from overseas. There are special Kentucky Derby prep races in the United Kingdom and Japan to encourage foreign participation. Japan’s Road to the Derby includes the Unicorn Stakes, Fukuryu, and Hyacinth Stakes. The United Kingdom’s Road to the Derby includes the Patton Stakes and the Vertex Futurity Trophy.

The points emphasis is on three-year-old racing, with even the winner of the Breeders’ Cup Juvenile (G1), the premier race for two-year-olds, getting only 20 points for the win.

Favorites On A Roll There was a time when being the favorite was almost a sure sign that your horse was not going to win the Run for the Roses. For 20 straight years, from 1980 to 1999, the horse with the lowest Kentucky Derby Odds never won the first jewel of the Triple Crown. […]