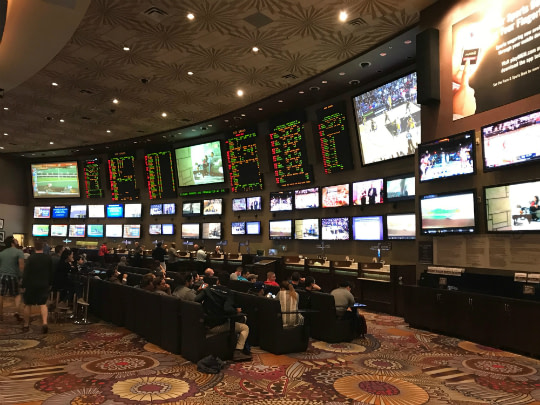 This is the capital of Party Town on the Las Vegas Strip. Everything is big, bold and outright crazy at MGM Grand, except maybe Las Vegas betting and the MGM Grand sportsbook.

Big? Most rooms of any hotel in the country.

If you’re looking for some peace and quiet in the middle of the desert, try the South Point or M Resort casinos off the Strip. This place is hopping all the time.

Complimentary drinks if you bet

The MGM Grand may be one of the best sportsbooks on the Las Vegas Strip, especially when you bring the four skyboxes on the second level of the venue into the discussion.

These special boxes can hold up to 10 guests, but they must be reserved and are typically used by high rollers for big sporting events. The boxes each range from 300 to 325 square feet and come equipped with high-definition TVs and surround-sound audio.

Players must be 21 years of age or older to wager anywhere in Nevada, including on MGM Grand entertainment esports or any other gaming platform in Las Vegas.

There’s comfortable leather seating for 104 guests on the main floor of the MGM Grand sportsbook with dozens of big screens offered in a mix of sizes on the one and only wall of the room.

At the top of the curved wall are three 12×16-foot big screens for the main action of the day with six odds board displays on either side.

There is also seating with individual monitors for horse racing fans, and an area at the back of the room with bench seating and chairs for small groups.

MGM Grand sports betting — with the casino entrance at one end and the Stage Deli at the other — offers pari-mutuel wagering, daily games, sports futures and some proposition wagers, particularly for major sporting events.

The MGM Grand sportsbook offers complimentary beverages with a voucher, but they’re getting harder and harder to come by on the Strip. MGM Grand, which seems to be one of the more reasonable venues for a free drink, requires a $10 bet on horse racing or $100 wager on MGM Grand sports lines.

There are two options for MGM Grand online sports betting. One is to register at any of the MGM resorts in Las Vegas and download the playMGM sports betting app and view the MGM Grand Las Vegas sportsbook odds on your Android or iOS device.

But this platform, which is an IGT PlaySpot mobile solution, is only available in the state of Nevada.

A better betting option for those wanting to wager on sports is the top-ranked online site Bovada, which is available in all 50 states.

Place Your Bets at MGM Grand

Here are some of the sports to bet on, although the MGM Grand sportsbook online offers even more wagering options, including “in-play” betting:

Here are some of the bets available at the land-based MGM Grand sportsbook:

The MGM Grand sportsbook seats will fill up fast for major events like prize fights, March Madness and the Super Bowl, but the standing room area behind this section still offers a great view.

MGM Grand is surrounded by other MGM properties — like Excalibur, New York New York and Park MGM — that all use the Mlife rewards program.

Mlife members gain exclusive access, benefits and rewards at MGM Grand and other MGM venues by earning points for every dollar spent or gambled.

The starting tier at the MGM Grand sportsbook and resort, which is Sapphire (blue card), has limited benefits. The rewards, however, change at the next level called Pearl. These members are awarded discounts, dedicated line options at restaurants and buffets, and complimentary parking.

Members can continue the climb up the Mlife ladder into Gold, Platinum and the Noir level (black card). That status, however, would take some time to earn. The higher the level, the more privileges on meals, room rates and complimentary gifts.

MGM high rollers have access to the finest of rooms in the two-story Skylofts. They are on the top floors of the main hotel.

The MGM Grand Las Vegas sportsbook is located at the main intersection of Tropicana Avenue and South Las Vegas Boulevard across the street from the Tropicana and two other MGM properties — New York New York and Excalibur.

It has experienced many changes and renovations over the years. From the Wizard of Oz and the Emerald City to the family-friendly Adventure Theme Park, the massive green property now houses the style of the Art Deco era of classic Hollywood.

MGM Grand, like all the major properties on the Strip, are now charging for parking. Certain reward card members still qualify for a free pass in the seven-floor self-parking garage off Tropicana Avenue.

Ride share programs and the public bus system are the best bets for visitors staying at MGM Grand. Uber and Lyft are taking over from the more expensive taxi fares. Limousine services are available as well, with the going rate around $85-90 an hour.

The MGM Grand sportsbook and property include five outdoor pools, rivers, and waterfalls that cover 6.6 acres, a 380,000-square-foot convention center, the MGM Grand Garden Arena, and the Grand Spa. So, of course there are a lot of stops along the way for food and drinks, whether it’s Project Pie for pizza or
the massive Hakkasan Las Vegas Nightclub for cocktails and a good time.

Here are some of the more highly rated restaurants and eateries at MGM Grand:

The MGM Grand sportsbook and hotel, which opened in December 1993, is the largest single hotel in the nation with 6,852 rooms. The property is made up of the main hotel building, Skylofts, Signature towers, and the Mansion of MGM Grand. Each tower has pathways including moving walkways for the connection to MGM Grand.

The MGM Grand sportsbook comes with a huge casino. It has one of the largest gaming floors in all of Las Vegas, measuring 171,500 square feet. The casino winds its way throughout the first level of the resort. They have more than 2,500 machines for gaming as well as 139 poker and table games.

The slot machines range from one cent to $1,000 and include progressive slots, video poker, and multi-game machines. There is a special high limit slots area, featuring machines with payouts of up to $500,000.

Table minimums tend to be $10. They climb if there’s a major sporting event in the house like a prizefight. The same goes for other championships which draw a huge crowd like March Madness or the Super Bowl. Some of the games available to play include:

Other table games on the main casino floor include:

The section at the front of the house by the main entrance and the Rainforest Cafe also feature some recreational games for guests to play.

Servers do offer guests that are playing on the casino floor a complimentary drink. These may be harder to come by during peak hours.