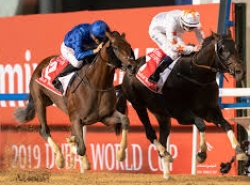 When the annual Dubai Carnival comes around again in March, you will want to know the Dubai World Cup odds. This $12 million horse race around 1 1/4 miles at Meydan Racecourse in Dubai is one of the most prominent fixtures in the racing world. It is part of the greater Dubai World Cup carnival with $35 million of purses and six Grade 1 races. If you want information on the Dubai World Cup live odds, this is the right place.

The odds to win the Dubai Wolrd Cup are now available. The odds are subject to change and will likely adjust as the day of the race approach, as such we’ll be sure to keep this page updated. The odds were last updated on September 21, 2020:

The Dubai World Cup is a bit different in that it is run in the United Arab Emirates, which has strict anti-gambling laws. No one in the country can bet on the race, but the rest of the world is able to place their wagers on what is undoubtedly one of the most important fixtures on the annual racing calendar. The fans who attend the Dubai World Cup in person do that because they want to be there for the majesty and prestige of the races, but the fans watching at home on the computer or television can certainly partake in the action with some of their own wagers!

The odds for the Dubai World Cup will change and fluctuate leading up to the big race in March 2021. Unlike regular sports betting, horse racing bets are entered into pari-mutuel pools. That means that all the money bet on wagers such as win, place, and show get placed into a single pool, which is ultimately divided between the winning tickets. Favorites will obviously have a lower payout than longshots.

Both longshots and favorites have historically done very well in the Dubai World Cup. Then, the pool is divided among the winning tickets. In addition to bets on horses to win or place, you can bet on multiple finishers completing the race in the right order, such as a Dubai World Cup exacta or trifecta.

Most horse racing bettors will not travel to Dubai to see the Dubai World Cup in person, and betting is not legal there anyway. That makes finding the perfect online racebook even more important! Review the best sportsbooks, such as InterTops, as well as their sign up offers and bonuses, and keep an eye out for Dubai World Cup current odds. These sites can also have free Dubai World Cup expert picks.

Online betting of the Dubai World Cup carnival is the perfect way to enjoy one of racing’s biggest days from the around the world, without ever leaving the comfort of your home!

The first Dubai World Cup was not held until 1996 and took place at the old Nad Al Sheba Racecourse, which was not opened until 1992.

The creation of the Dubai World Cup over 1 1/4 miles on the sandy main track saw an original purse of $4 million. American superstar Cigar flew in for the race and won, cementing the race’s legacy immediately.

The Dubai World Cup became so successful that officials built the new Meydan Racecourse, which is a spectacular and sprawling venue with a hotel, museum, and grandstand overlooking multiple well-groomed courses. Meydan was put into use in 2010.

The Fastest Time Ever in a Dubai World Cup Race

The fastest time ever in a Dubai World Cup race came in 2000 when the late, great Dubai Millennium ran a time of 1:59.50 on the dirt track of Nad Al Sheba. After the race was moved to Meydan Racecourse in 2010, the fastest clocking has been Thunder Snow’s 2018 time of 2:01.38. The largest winning margin came from American-based Well Armed in 2009, winning the World Cup by 14 lengths.

The winningest trainer in the history of the Dubai World Cup is Saeed bin Suroor with a record nine victories. Top American trainer Bob Baffert is the only other trainer in history to produce more than one Dubai World Cup champion, with Silver Charm (1998), Captain Steve (2001), and Arrogate (2017) all winning for him.

The Dubai World Cup was the brainchild of Shiekh Mohammed bin Rashid Al Maktoum, who proposed a $4 million horse race that would draw the best runners in the world. Globe-trotting star Singspiel won the second edition, then Kentucky Derby and Preakness Stakes winner Silver Charm took the third, edging English-based Swain in an epic battle.

The inspiring performance from Dubai Millennium came in 2000. The Godolphin homebred was originally named Yaazer but was renamed to Dubai Millennium in hopes he would run in the 2000 Dubai World Cup, which he did and won by six lengths.

Two years later, Godolphin won again with Street Cry, who went on to be the sire of Zenyatta.

When California Chrome’s saddle slipped in 2016, and jockey Victor Espinoza had to balance carefully on the entire ride and hope that the Kentucky Derby and Preakness Stakes winner wouldn’t throw him. California Chrome stayed focussed and won a popular victory. In 2017, the Pegasus World Cup hero Arrogate stumbled badly at the start, giving the field advantage, but still won and captured his fourth multi-million dollar race in eight months.

The only two-time winner of the Dubai World Cup is Godolphin’s Thunder Snow, who won the race when the purse was $10 million and $12 million, putting his earnings at over $16.5 million. No filly or mare has ever won the Dubai World Cup.

The biggest field for the Dubai World Cup is 16 horses, but the race has only had that many starters once, in 2014. In 2007, just seven horses went to the post as the smallest field on the record.

The Dubai World Cup Carnival is not just relegated to the World Cup itself. The day also brings together the best horses in the world for millions of dollars in purses. The rich undercard races include six Group 1 events and three Group 2 races.

There are also boxes available for multi-horse wagers, meaning you can pay a little more and the horses you select can finish in any order.

Keep an eye out for more news and information on the 2021 Dubai World Cup, which is sure to be one of the great events of the racing season!