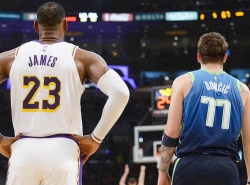 Find the very best NBA Playoff odds and all other NBA Playoff resources, including statistics, predictions, and team news right here. The 2020 NBA Championship outright winners odds are available but are likely to change throughout the course of the season so be sure to keep checking back with this page. These were last updated on March 27, 2020:

There’s a lot to play for during the NBA Playoffs, with a wide variety of wagers and excellent betting options available to sports fans. There are even obscure betting lines like NBA MVP betting and various props bets that come from NBA betting, with common wagers like NBA final betting.

The growth of the NBA has also helped to boost the event from being something for fans of the game and the league itself, to being a global event viewed by millions.

Although the NFL and MLB are very much the leaders in sports value and viewership, the NBA was still valued at over $7.4 billion in 2019 and boasts the second most-followed sporting league on a national level.

This frantic part of the postseason is the most exciting period on the basketball calendar. The 2020 NBA Playoffs were scheduled to kick off on April 18th and were supposed to run through until June 4th. With an astonishing 1,230 regular-season games to get through, by the time we get to the Playoffs NBA fans are itchy to find out who will be crowned champions.

Nowadays NBA bets are some of the most common. The nature of the game offers plenty of betting options to sports fans, though the MLB is actually one of the few sports that offers more.

The ocean of opportunity awaits NBA fans, with so much to play for in NBA Playoff betting it’s difficult to know where to start. Unsure? Well, we’ve put this handy guide together to give you a crash course on how to get value out of NBA Playoff Betting!

Currently, the 2019-20 season is suspended and there no available NBA Playoff odds.

How do NBA Playoff teams work?

Back in 2016, the NBA restructured their seeding for the NBA playoff bracket so that 8 teams in each conference are seeded solely based on their record. Only the best teams of the NBA regular season participate in the playoffs. The idea of a “true” bracket was also brought in, meaning when a team wins they move directly over in the bracket. In the NFL teams are reseeded at this point, something that isn’t done in the NBA.

The NBA playoffs period is arguably the hottest betting period during any NBA season. The NBA odds for the divisional playoffs attract a great deal of attention – on a global scale! The various NBA betting trends are a huge attraction to gamblers, regardless of their interest in the sport.

In terms of each series that is played during the NBA post-season, the series are played as a best-of-7 series. It used to be played as a 5-game series, but in true American sporting fashion, the bigger the better! The only other thing worth noting here is the rotation between home courts;

Where to Find the Best Odds for the NBA Playoffs

Everyone has their own idea of where the “best” odds are for the NBA playoffs. Although, with so many different NBA betting sites, it’s hard to be sure. We’d always recommend shopping around the various sportsbooks online, checking out bonuses, odds and betting markets available to see which best suits you.

While there are hundreds of online sportsbooks, here at VegasBetting we’ve compiled a comprehensive list of the very best sportsbooks for NBA playoff betting.

Before beginning a career in NBA betting predictions, there a few things to go through. To begin with, it’s worth noting that “NBA betting odds” can be used interchangeably with “lines.” This is common on a number of sportsbook providers. The term “Vegas odds”, or NBA Vegas Odds”, means that the wager probably originated in Vegas, which is quite normal considering it’s the mecca of gambling globally.

Regardless of that, the betting odds/lines just indicate the likelihood of an outcome happening in a particular NBA playoff game. There are a variety of online sportsbooks offering various different betting options, lines/bets and more. But just a quick reminder that here at VegasBetting we offer a range of recommended online sports that you can trust.

When sportsbooks create betting lines, their intention is to get people to wager on both teams. While taking a glance at the odds, a basketball fan looking to do some NBA online betting will notice the “-” and “+” next to the sports betting line, which indicates the favorite and the underdog in the eyes of the bookmaker.

Negative numbers signify the favorite on the betting line, while the negative number indicates how much you’d need to be to bet to win. For example, if a bettor places a wager of $100 on a point spread wager, they would be required to bet slightly more than the $100 stake. The amount does vary depending on the vig also sometimes known as juice, cut, or take) that the particular sportsbook charges.

A point spread bet is used in sports betting to even the odds out when two teams play each other, with one side being the clear favorite. Point spread betting allows bettors to get involved in games that have a clear winner/loser result unless there are some wild surprises before the game begins.

Each team is given a point total by the sportsbook provider that can either be added or subtracted from the final score, which will dictate whether the bet was won or lost.

An example of this in NBA playoff point spread betting would be;

The “-” before the 9 indicates that the Lakers are the favorites. While the “+” shows the bettor that the Bucks are the underdogs (dog). If the bettor wants to bet on the Lakers, they would have to win by a total of 10 points for the bet to come off.

With regard to the Bucks, if the bettor chooses to wager with Milwaukee they would have to win outright or lose by no less than 8 points for the bettor to win. It depends on the bookmaker if a 7 point victory came about the Lakers would push or tie the game. Often what happens at this point, is the bettor would receive their stake back – though this highly dependant on the bookmaker.

NBA Playoffs against the spread

Betting against the spread is a good betting strategy to use when the point spread is low. Alternatively, if the basketball fan believes that the team they are betting on can beat their opponent by at least the point spread advertised.

This kind of wager can result in a huge payout for the bettor. An example of this would be if the Dallas Mavericks (-7) would beat the Phoenix Suns (+7). That means the Mavericks would have to win by more than 7 points for the wager to payout. Due to the nature of the game, spread betting is also extremely popular within the NHL.

The Over/Under is one of the most popular betting options out there. It commonly refers to how many points the oddsmakers feel will be scored in an NBA game by one team or both teams combined – with it classically representing both teams combined.

A simple example is often the best way of understanding this; so, for example, a bettor places a wager on an NBA playoff game for the total to be under 201. This means if the game goes beyond a combined total of 201, then the bettor loses. However, if the combined total points from both teams at the end of the game are anything less than 201, the bettor is a happy customer.

Soccer has become one of the fastest-growing sports in the US, which has made it very popular in the gambling industry. Due to the uncertainty of soccer matches, over/under soccer betting odds have become a highly popular wager among sports fans.

Odds for NBA Playoffs this weekend

There are currently no games due to the Coronavirus outbreak. Though we will keep this page updated as things change.