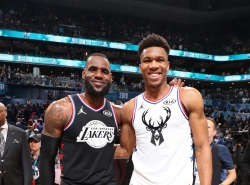 The NBA All-Star Odds are some of the most exciting days of the annual NBA calendar. A weekend featuring the best players on the planet, with exciting contests running throughout the weekend offering a broad range of NBA All-Star lines.

Recap the top moments from a special, unforgettable #NBAAllStar weekend in Chicago! pic.twitter.com/mPKKpYaIi8

As well as the main event, which is the game between the two captains and their drafted players, the day features the Slam Dunk Contest, Skills Contest, and the Three-Point Contest. The NBA All-Star odds are excellent, offering a great range of NBA All-Star prop bets. Check out below the best NBA betting sites.

The NBA All-Star Game outright winners odds are unavailable, but as soon as they’re available we’ll be sure to post them here – so stay tuned! This page was last updated in March 2020.

How do NBA All-Star teams work?

The NBA All-Star weekend is taken very seriously by the league, with no regular-season games scheduled around the time of the event allowing players to prepare properly for the event. As of 2018, the leading vote-getters for the Western and Eastern Conference are given the role of captain for their respective Conferences. The 2020 All-Star game featured LeBron James and Giannis Antetokounmpo, with LeBron’s men edging the tie.

The selected captains will then choose their playing through a drafting system from a pool of 22 players, which had been previously voted in, picking starters and reserves. Players can be selected from either conference, unlike their captains. There are great NBA All-Star odds for the draft day as well. One of the great underlying aspects of the All-Star weekend is the charitable element of it all. Each team captain selects a local organization to represent and donate to once the weekend is over.

Where to Find the Best Odds for the NBA All-Star

It’s a common question from sports fans, both experienced bettors and new users, but there is no simple answer. The magnitude of an event like the All-Star weekend draws a lot of attention from the gambling industry, offering punters so many different sportsbooks to choose from.

The All-Star weekend brings a wide variety of betting options, from NBA All-Star game over/underlines to the basic win/loss wagers. Bettors across the globe play the market over the All-Star weekend, with so many world-class players competing in one game, it’s hard not to get involved.

One thing worth mentioning, which may confuse new users especially, is the three different types of odds that may be displayed on the various sportsbook providers. Although the following odds look quite different, they represent the exact same values; so there are American (+650), Decimal (7.5) and Fractional (6.5/1) odds. For those that love the NBA, they will also see these types of odds during the regular season.

The game itself is without question the main All-Star event of the weekend. Given that there are all kinds of glitzy prop bets for the various events over the weekend, the over/under wager will be much larger than what bettors would expect to see in standard NBA regular-season games. When the NBA Playoffs odds are released, they also feature a variety of great props. It’s smart as a bettor to be aware of this difference, betting intelligently will open up the opportunity to take advantage of the market.

Point spread betting is fairly straightforward once you’ve had it explained to you. Spread betting covers the various types of bets on the outcome of the All-Star game where the pay-off is based on the accuracy of the wager. It allows sports fans to bet on something other than your basic win/loss. As an NBA All-Star weekend betting line, it would involve betting on the accuracy of the wager made, meaning the result would have to be as close to a pre-determined value as possible in order to payout.

NBA All-Star Against the Spread

To do against the spread (ATS) betting is quite different than your standard NBA All-Star game over/under bets. Instead, bettors covering the spread means a simple point spread bet. For example; ATS: Giannis to win by more than 7 points (5.00) If Giannis’s team win the game by more than 7 points, the bettor will have covered the spread. Betting against the spread in this case simply means you’re betting on the point spread, in a particular matchup as opposed to simple money, parlay or other types of wager.

NBA All-Star over/under games work similarly to how any over/under games work. It’s slightly different than basic moneyline bets. It works by choosing a value that’s and then deciding whether the game will go over or under that particular value. Generally speaking, the value represents a combined total of two scores. For example;

In this case, the NBA All-Star game over/under represents a combined total score of 217.5, with the bettor choosing the over line. This means, if the bettor had played a $10 stake on this wager and the game finished at 218 or anything higher, the wager would payout. If it was 217 or lower, then the house would win. The over/under is a common wager in more than just the NBA All-Star weekend, it’s a major line for bettors wagering on many sports.