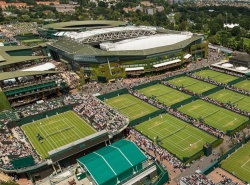 Sadly, Wimbledon was cancelled in 2020 due to the lockdown which occurred as a result of the COVID-19 pandemic. Sadly, this means there are no Wimbledon betting odds available in 2020.

The tournament usually takes place in late June and runs through until early July. The Ladies’ and Gentlemen’s Singles Finals are played at the end of the second week and mark the last days of the legendary tennis tournament.

Wimbledon odds always attract a large number of bettors, not only because it’s one of the tennis majors on the ATP Tour, but also because the tournament has been around since 1877 and has prize money valuing just shy of $40,000,000.

This purse for the tournament is divided between Wimbledon women’s odds and men’s, which draws in the very best talent in the tennis world to play on the most prestigious grass-court tournament around.

Historically, Britain hasn’t seen that much success at the tournament, even though they are the host nation. However, in recent years the rise of British tennis star and three-time major winner Andy Murray really changed things.

Murray lifted the coveted Wimbledon trophy, which is mounted with a pineapple, and nobody knows why, back in 2013, and remains the number one for the UK. However, at the tail-end of 2019, he announced his retirement leaving oddsmakers wondering whether to post Andy Murray to win Wimbledon odds, as so often we hear about athletes retiring only to play again.

Without Murray competing it certainly takes away from the magic of the event. But the men’s Wimbledon odds are still as hot as ever, as stars like Novak Djokovic, Rafael Nadal, Roger Federer and rising young star Stefanos Tsitsipas look to be crowned champions in 2020.

For those that want to get stuck in and start wagering on the Wimbledon tennis odds, we’d strongly advise taking a look at BetOnline. An excellent provider, which is committed to providing the best odds on all tennis majors. Alternatively, take a look through our list of recommended sportsbook providers and select the one which suits you.

It’s important to recognize that the tennis odds for Wimbledon will fluctuate a lot and as we move closer to the summer of 2021 and the next tournament, the odds are likely to fluctuate a great deal. As this is the case, we’d strongly recommended checking back with this page as often as is necessary to keep up to date with any movements in the market.

The Wimbledon 2021 odds are now available. While we don’t have the Wimbledon final odds, the current odds do highlight the favorite to win the tournament, even at this early stage. The Wimbledon odds below were last updated on June 29, 2020:

Much like the US Open betting odds, Wimbledon tennis odds are hot stuff around the time summer begins in the UK. It’s important to recognize this and as the tournament approaches it’s key to keep a close eye on the odds to see who may be the outright winners.

Tennis online betting sites are very popular, with four major tennis tournaments running throughout the year there’s a lot to play for – we recommend taking a look at our list of sites if you want to wager on any tennis major.

How to Make the Most of Wimbledon Betting Odds

In order to make the most of Wimbledon odds in 2020, it’s important to recognize the various types of bets available. While many of the betting lines follow the same course as other major mainstream sports events, there are some unique markets on offer with Wimbledon betting odds.

We’ll cover the different types of Wimbledon tennis odds below. Take a look, or for those bettors that feel they’re ready to dive right in taking a look at what’s on offer over at Bovada, MyBookie, and GTBets. It’s one of the biggest oddsmakers in the world and offers some great Wimbledon tennis odds.