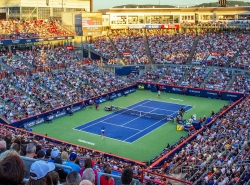 Originally the Canadian Championships, way back in 1881 the first men’s singles championships were held. The tournaments have always been held in Toronto and Montreal and played on hard court surfaces.

As it stands, we are still waiting for the major sportsbook providers to post the RBC Canadian Open odds, however as soon as they become available we’ll be sure to post them here. This page was last updated on June 30, 2020:

The 2020 tournament was due to take place between August 7 and August 16. However, due to the novel virus COVID-19, the tournament has been postponed, leaving us waiting until 2021 for the next big tennis event in Canada.

The ATP Tour event rotates between Toronto and Montreal each year and was scheduled to be played at the Aviva Centre at York University. The 2021 event is expected to be played in the same city, for the men’s and women’s tournaments.

The RBC Canadian open odds are always a popular market for bettors and we will be sure to make some Canadian Open picks as the event approaches in the fall of 2021.

There are a variety of odds and betting lines for players to wager on, as is the case for tennis betting odds markets in general. For those that are keen to play the odds on tennis, we’d strongly advise taking a look at one of the major providers 5dimes.

RBC Canadian Open predictions should also consider the fact that certain players may be burnt out. If a particular player has played a full season of ATP tournaments and is going to the latter stages of each major, they may be tired and unable to perform as well as they usually could.

While we don’t have a lot to work with from the oddsmakers, our tennis experts are well-informed and can make some RBC Canadian Open expert picks for the 2021 event. While we can’t guarantee any of these individuals will compete, due to injury or personal reasons, these are likely to be the favorites for the 2021 event.

World No. 1 Novak Djokovic has won the tournament four times, with his last win coming in 2016 against the Japanese player Kei Nishikori. Djokovic has proved to be a formidable competitor on any surface, while many would argue he’s a grass court specialized, and arguably the most successful male grass court player of all time, he will be amongst the favorites next year.

Rafael Nadal is the most successful player in modern tennis history at the RBC Canadian Open and would certainly be high up on any Canadian Open expert picks. He’s one of the most athletic players in the game and has shown time and time again that he can compete and win against anyone.

The 24-year old Russian Daniil Medvedev is currently ranked 5th in the ATP rankings (30/06/2020) and will be right amongst the best when the 2021 Canadian Open odds are released. As an outside favorite, we would choose Medvedev at the best in our RBC Canadian Open picks. He’s a strong competitor and is exceptional on a hard court surface. He lost in straight sets to the Spaniard Nadal last year at the Rogers Cup and will be out for revenge in 2021.

When the time comes, we’d recommend taking a look at one of the major sportsbook providers such as Bovada or GTBets, who cover all major tennis tournaments throughout the year.

How to Read Canadian Open Odds

One thing all bettors must do before they begin wagering is to learn how to read the Canadian Open odds. There are a few things to consider. Firstly, pay attention to the type of odds American (-500), Decimal (1.20), and Fractional odds (1/5).

After that, it’s important to understand the various betting markets on offer. To ensure our readers understand how to play the odds, we will break down the betting options on offer at tennis betting sites.