Find the Best Superbowl 55 Odds right here. As we approach the event, the odds to win the Superbowl 55 will change and as such, we’ll keep you updated.

About half the money wagered on the Super Bowl is placed on props. People seem to love gimmicks. So when the 2021 Super Bowl comes around, check this page for the best Super Bowl prop odds.

Some of the Best Super Bowl Prop Bets 2021 include:

The Kansas City Chiefs have found their secret for NFL postseason success. Double-digit deficits for the AFC champions seem to ignite an offensive outburst and a berth in the next round of the playoffs.

That next round for the Chiefs (-120) is now Super Bowl LIV, which the team had has reached for the first time since the 1969 season when quarterback Len Dawson led his 13-point underdogs past the Minnesota Vikings on Jan. 11, 1970 at Tulane Stadium in Louisiana (NFL Super Bowl odds 2020 provided by Bovada).

The Chiefs will line up against the San Francisco 49ers (+100), who dominated the Green Bay Packers to win the NFC championship and a trip to the Super Bowl. The biggest game in football will be played Sunday, Feb. 2, at Hard Rock Stadium in Miami Gardens, Florida. Kickoff is 6:30 p.m. ET. The game will be shown nationally on Fox and streamed online.

Las Vegas sportsbooks and top-ranked online sites are already taking bets on Super Bowl odds 2020 betting lines. An estimated $6 billion was wagered on the game last year, according to the American Gaming Association.

The odds opened as a pick’em game but have now swayed to the Chiefs as a one-point favorite with the over-under total Super Bowl Vegas odds 2020 at 54 points. Your odds are fixed if you make your bets now at online sites like BetNow and GTBets. 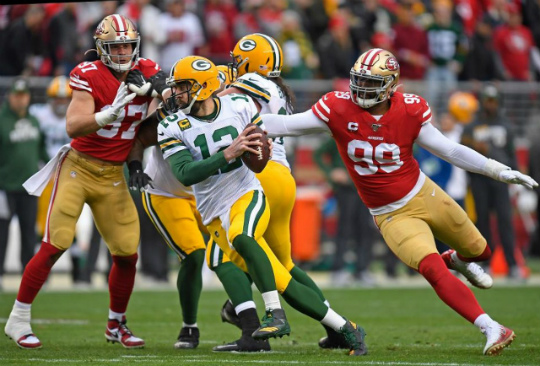 Contenders By The Numbers

The Chiefs were among the favorites in future betting before the 2019-20 NFL season started. KC was listed around 8-1 to win the Super Bowl, while the 49ers were a lucrative 40-1. Here are some other numbers to compare for the two contenders. 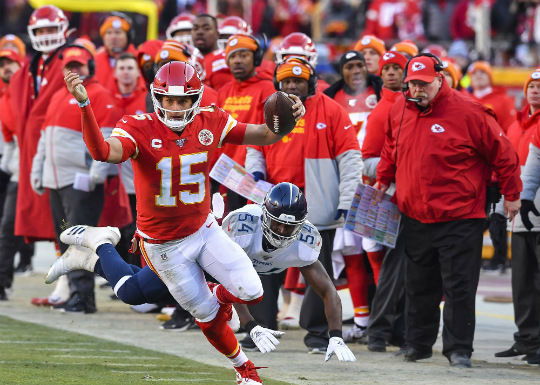 Why the AFC Champs Will Win

The Chiefs trailed the Houston Texans by 24 points in the divisional round and the Tennessee Titans by 10 in the conference final. They were unstoppable the rest of the way, scoring 86 points in the two playoff victories.

Kansas City hasn’t lost a game since Nov. 10, with the team scoring 23 or more points in every game since Week 10. Quarterback Patrick Mahomes, the 2018 MVP, has thrown for eight touchdowns in the playoffs and has undoubtedly been the best QB in the postseason.

The offensive unit is like a track team. If there are any weaknesses on this roster, it will be the team’s defense, which ranks 17th in the league and 26th against the run.

Why the NFC Champs Will Win

Outside of a poor effort in Week 15, when the 49ers lost at home to the Atlanta Falcons, San Fran has been in high gear right from the beginning of the season when the team started 8-0.

Quarterback Jimmy Garoppolo is a Top 10 quarterback, but he isn’t an MVP candidate like Mahomes. The 49ers will rely on a destructive running game and the second-ranked defense in the league to outlast the Chiefs.

This championship has all the markings of San Fran’s Week 16 game in New Orleans, where the 49ers won in one of the loudest stadiums in the league and edged the Saints 48-46.

This is the fourth time this season that the 49ers have been the underdog by 1.5 points or less. They have won them all.

The odds figure to change as kickoff approaches for Super Bowl LIV, but the Chiefs are the current favorites at -120 on the money line, -1.5 on the point spread, with the over-under total at 54 points.

San Francisco (+100). The Super Bowl will be decided on the battle up front between KC’s offensive line and San Fran’s outstanding front four. The 49ers, whose defensive linemen are all former first-round picks, must put pressure on Mahomes to win this game. San Fran will get enough stops to capture the Super Bowl.

VGB’s pick against the spread

San Francisco (+1.5). Both teams have terrific records against the spread this season, including the playoffs. The Chiefs are 12-5-1, with the 49ers at 11-6-1. Since we’re picking the Niners to win the game straight up, that means they will also win ATS.

Over (54). This is my favorite time of year to visit Las Vegas, and this is my ideal bet for this year’s Super Bowl. San Fran has rolled in its first two playoff games, scoring an average of 32 points. It’s also hard to imagine any team holding Mahomes and the Chiefs under 30 points. Unlike last year’s 13-3 result, this game has “shootout” written all over it.

American Gaming Association (AGA) conducted a survey before the 2019 Super Bowl and found out that over 20 million Americans were going to place a bet on Super Bowl.

In 2017, Las Vegas sportsbooks took in almost $140 million in wagers on the Super Bowl. In 2002, it was almost half that much. Still, only about 5% of the bets are made in the legal market and the rest in the illegal markets.

Bettors want to join in on the excitement in a big way.

Money line, point spread and over/under all play a role, but the prop bets dominate the betting slips. There are pages and pages of these bets within the game — which team will win the coin flip, will the first score of the game be a safety, will the quarterback’s longest run of the game be more than eight yards? Gamblers line up by the thousands all weekend long on the Las Vegas Strip to put down their bets.

The first Super Bowl was played on Jan. 15, 1967 in the Los Angeles Memorial Coliseum with Green Bay defeating Kansas City 35-10. More than 50 years later, Pittsburgh and New England hold the record for the most championship titles with six. Dallas and San Francisco are tied for third with five each.

The championship game is broadcast in seven languages in 170 countries and territories.
Advertisers pay more than $5 million for a 30-second spot — that’s almost $200,000 per second. Some viewers watch just for the entertaining commercials. Others for the big name on the halftime show. But the overwhelming majority are here for football, and most have some money on the game.

If you can’t make it to Las Vegas to place your bets or attend one of the many Super Bowl parties, there are other online betting options like Bovada, TopBet and Betonline.

Let’s take a look at different types of Super Bowl odds – my examples are from 2017’s Super Bowl LI.

What does this mean? To win on the money line, you just have to pick a winner — period.

The point spread for the Super Bowl was New England (-3) over Atlanta.

Super Bowl Over Under

The over/under point total for this game was 58.5.

If you bet the over, you had a winning ticket.

It does not matter which teams win the game in this bet.

The Patriots were 8-1 before the season began to win Super Bowl LI.

The Falcons were 40-1. These are futures bets, since a wager has been made on an event that concludes in the future. As the season progresses and these two teams keep on winning, a futures bet is still available, but the odds are likely a lot lower.

These bets are why the lineups are so long in Las Vegas, and why the wait is even longer. Everyone in line is betting some sort of prop bet.

The list of bets is endless, starting with odds on the exact final score for each team, to who will win the MVP award, who will catch how many passes, and on and on and on.

Some of these bets are a 50/50 proposition, some of them not even close — like will a safety be scored in the game. But this is where the huge payoffs are, and that’s what seems to draw a lot of the action.