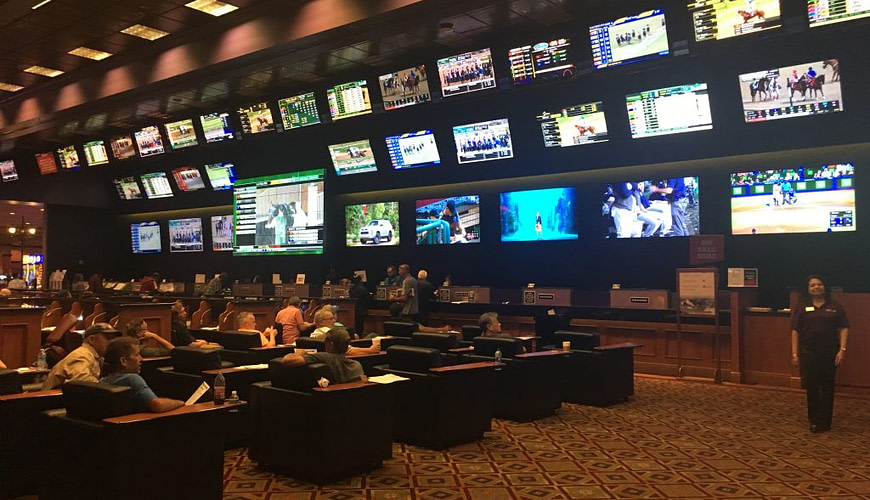 Were you looking for the Miracle Mile Shops, the Pleasure Pit or the Playing Field? All three venues are located on the Planet Hollywood property in the center of Las Vegas betting on the famous Strip. These three diverse destinations should offer something for everyone, especially the younger crowd.

Get ready for the up-tempo beat and sounds of the PH casino, where it always appears to be nighttime. But don’t worry about those distractions leaking into the Planet Hollywood sportsbook. They’ve done a nice job of guarding the sounds of the game away from the hoopla in the main gambling area.

Their App Only Works in Nevada

The entire property is located at 3667 South Las Vegas Boulevard, but the Planet Hollywood Las Vegas sportsbook sits at the southwest corner of the casino and almost backs onto the Strip.

Like the Cosmopolitan sportsbook across the street, those wanting to wager on the Planet Hollywood sports lines can be on an outside escalator and, a few minutes later, betting on the money line inside.

This is one of the most convenient locations of a sportsbook on Las Vegas Boulevard, and its competitors should learn from this, instead of hiding some of the best sportsbooks away from all the foot traffic.

The Playing Field Lounge is open 24 hours, but there is a window for sports betting.

Players must be 21 years of age or older to wager anywhere in Nevada, including on Planet Hollywood entertainment esports.

The room features 33 flat-screen TVs with two big-screen units in the middle of the main viewing wall. For those wishing to eat while cheering on their favorite team, the lounge has pub food available along with draft beer yard longs.

No, the yard longs are not free, but a complimentary drink is available upon request from a ticket seller with a sports bet of $50 or horse racing wager of $20.

Planet Hollywood Las Vegas sportsbook odds are offered on all the major sports — including the NHL, NBA, MLB, and NFL — along with pari-mutuel wagering for dogs and horses. The queue at the few betting windows is short most of the time, although championship events — like the Super Bowl — tend to draw a standing-room-only crowd.

There is also the option of skipping the betting queue and taking your action online. Visitors can register at any one of the Caesars properties on the Strip — including Planet Hollywood and its neighbors Paris and Bally’s — and download the Mobile Sports at Caesars Entertainment app to your Android or iOS device.

This may be a good option for those wanting to play Planet Hollywood online sports betting, but the app is only valid for betting while in the state of Nevada. A better option is the top-ranked online site Bovada, which is available in all 50 states.

Bet on the NFL Right From Home

Professional and college football continues to lead the pack as the most popular sport to gamble on in the United States, according to the UNLV Center for Gaming Research. An all-time high $1.813 billion was wagered on the gridiron action in 2018, almost double that of baseball.

“A lot of people are complaining about these games,” said Jay Kornegay, vice-president of race and sports at the Westgate Las Vegas SuperBook. “You know, ‘poor football, boring and the ratings are horrible’ … well, it hasn’t slowed them down at the betting windows.”

It hasn’t slowed bettors down on the Strip either. Here are some of the other sports to wager on at Planet Hollywood:

Here are some of the bets available at the land-based Planet Hollywood sportsbook:

Planet Hollywood sports betting online offers even more wagering options, especially on props and “in-play” wagering, where odds and spreads change continuously as the sporting event unfolds. This type of betting has become extremely popular at other off-the-Strip venues as well — like South Point and Golden Nugget.

Planet Hollywood, which used to be known as the Aladdin until 2007, is located on the east side of the Strip and starts a long run of seven Caesars properties to the north.
The PH sits at the northeast corner of the major intersection of Las Vegas Boulevard and Harmon Avenue and is home to a 1.2-mile enclosed shopping mall called the Miracle Mile. This complex consists of more than 170 stores, 15 restaurants, and live entertainment venues.

Caesars properties on the Strip joined the paid parking movement in April 2017. However, self-parking remains free at Planet Hollywood. The property with the hip vibe has a 10-floor parking garage, but the top two floors are for employees only.

There are many modes of transportation to hurry new arrivals to Planet Hollywood Las Vegas, including taxi, limousine, public bus service, and the resort shuttle. But the best option is the rideshare programs, which now dominate the market with visitors looking for a budget-friendly ride.

Planet Hollywood is probably not the best choice for a family looking for a budget-friendly place to stay. This is a party hotel, especially considering the numbers of bars and shops that surround the hotel.
Food-wise, the property has a total of 11 restaurants, including four run by Planet Hollywood. Here are a few of the more popular spots at the resort:

The only way to get out of a Las Vegas resort fee these days is to become a top member in a rewards card club-like Caesars Rewards.
Planet Hollywood charges a $42-a-night resort fee for anyone staying at the hotel, which includes a few amenities like WiFi and access to the spa and pool areas. The upper-tier Diamond and Seven Star Rewards cardmembers get a free pass on this dreaded fee.
Members with the Caesars Rewards card program earn points for every dollar spent on gambling, hotel stays, food and drink, and shopping. It’s free to join.
New members start at the Gold level and work their way up through Platinum and Diamond to the top-level Seven Stars. The higher the level, the more privileges on meals, room rates, and complimentary gifts.

The dark and active 60,000-square-foot casino floor at Planet Hollywood includes all of the standard Vegas games plus go-go dancers in the Pleasure Pit and a clubby soundtrack. It’s a perfect spot for millennials, especially with the free parking, 1,200 slot machines, and the cheap eats in the Miracle Mile.
The table minimums are consistently $10, but it’s not uncommon to find $5 minimums during the quiet times in the week. This place has a lot of foot traffic to begin with. It only picks up on holiday weekends and around championship sporting events. Here are some of the table games available to play at Planet Hollywood:

Other table games spotted on the casino floor include Three Card Poker, Let it Ride, Pai Gow Poker, High Card Flush, Ultimate Texas Hold’em, Mississippi Stud, Crazy 4 Poker, and Casino War.
The large high limit room for tables games and slots is secluded from the main floor. All the games start with a table minimum of either $100 or $200, while the slots start at $1 and climb to $100 a pull.
Complimentary drink service is offered to those playing the machines or table games. The service is pretty good most of the time, which is about the same as resorts across the street like the Aria. A tip is recommended, especially if you expect to see the server again.

The 2,567-room Planet Hollywood hotel, which included a $100-million renovation in 2017, is the same property where Elvis and Priscilla Presley were married in May 1967. Every room has a Hollywood theme, with the top two VIP levels featuring actual props and memorabilia from the 1991 film Backdraft. The rooms in this mid-tier resort range from standard to luxurious Panorama suites with a view of the Strip.