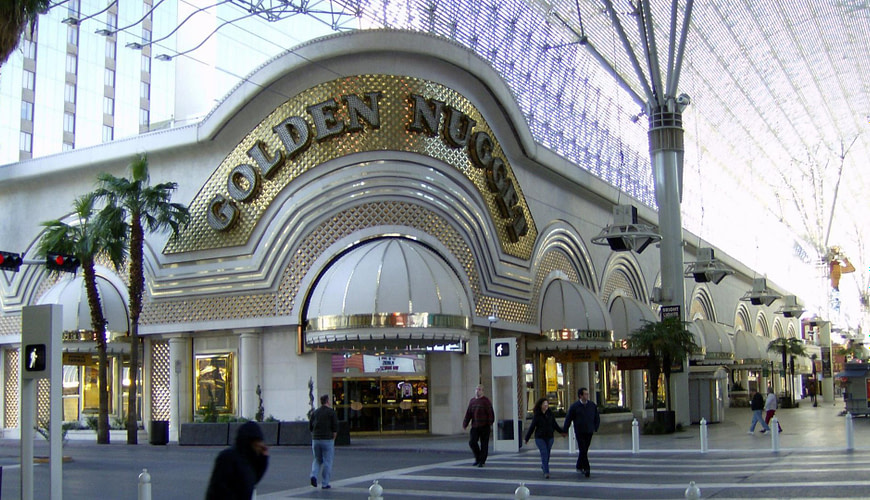 Built in 1964, the gambling hall has always been among the leaders in Las Vegas betting, thanks to its location at the main intersection of Casino Center Boulevard and the Fremont Street Experience.

The resort and its bright flashing golden lights have also had starring roles in such major Hollywood productions as the Elvis Presley film Viva Las Vegas (1964) and the James Bond movie Diamonds Are Forever (1971).

Most TVs per area in Vegas

Online app only available in Nevada

This is the nicest sportsbook in Old Vegas today.

Located at 129 Fremont Street, the Golden Nugget’s Vegas Sportsbook might not have the room size of the upscale venues on the main Strip, but it’s still one of the best sportsbooks downtown since it was renovated in 2014.

Players must be 21 years of age or older to wager anywhere in Nevada, including at this iconic resort and others off the Strip like South Point, Red Rock, and Station casinos.

The non-smoking Golden Nugget sportsbook is tucked away in the northeast corner of the casino floor, an ideal distance away from the noise and distractions of the slot machines and table games.

There is comfortable seating and lounge chairs available to watch sporting events and horse racing, but the main Golden Nugget sports lines are slightly blocked by the betting windows and columns anchored throughout the room.

“Our sportsbook has more TVs per square foot than any book in the state of Nevada,” the Golden Nugget website claims. Golden Nugget sports betting is also home to a handy eatery to the right of the room called The Grille with sandwiches, drinks, and snacks.

So, what can you bet on at the Golden Nugget Las Vegas sportsbook? There are Golden Nugget sportsbook odds available on all the major professional and college sports, from the regular season games all the way to the league championships.

If players want to avoid the betting queues, the Golden Nugget sports app can be downloaded to your Android or iOS devices. All Golden Nugget online sports betting is available on this platform, including Golden Nugget entertainment esports.

Like all of the other advertised sportsbook apps in Las Vegas, including those using CG Technology, the Golden Nugget Las Vegas sportsbook odds are only active online while you are in the state of Nevada.

It’s one of the biggest reasons why a membership with top-rated online site EveryGame is a much better bet.

EveryGame, which has been around for years, offers bonuses, rewards and unlimited betting options, unlike the Golden Nugget app, which was launched in February 2019.

Your Best Bet at the Golden Nugget

The Golden Nugget sportsbook offers all the common wagers of sports betting. It also features futures betting and a few prop bets.

Here are most of the betting types you can expect to find at the Golden Nugget:

Like most sportsbooks, the Golden Nugget gets most of its action from NFL games. Here are some of the sporting events bettors can wager on, including the league’s playoffs and championship:

The 30,000-square-foot Golden Nugget gaming venue is often regarded as the nicest casino floor in Downtown Vegas. It may not be as big an area as those on the Strip — like the 171,500-square-foot floor at MGM Grand — but it has all the top games gamblers are looking for with their entertainment dollars.

The casino offers a nice variety of slots and video machines with more than 1,000 units to choose from, many with a one-cent minimum.

Some table games post a $5 minimum, which is ideal for beginners, but most tables are $10 or even more in the high limit room. Some of the games available to play include:

Guests playing the slots, video poker or table games will likely be offered a complimentary drink. Don’t forget to tip at least $1 per drink. This is a good deal compared to the sportsbook, where bettors have to pay full price for a beverage.

Located in the heart of Fremont Street’s never-ending party, the Golden Nugget faces Binion’s Gambling Hall and the Four Queens under the Old Vegas canopy. It’s the resort with the $30-million award-winning pool, which is filled with a 200,000-gallon shark tank aquarium, three-story complex and one-of-a-kind water slide.

Unlike the Strip resorts that are charging up to $20 a day for parking, the Golden Nugget and its Downtown Vegas neighbors offer free parking for registered guests staying at the hotel.

Visitors from out of town have many transportation options to get to their resort after landing at McCarran International Airport. All of them can be found at the airport’s main terminal.

The cost varies on the service and distance to your resort for the following modes of transportation:

The Golden Nugget provides a smorgasbord of culinary venues to satisfy those looking for a quick meal to others that like to enjoy the food and atmosphere of fine dining. The seafood restaurant Chart House, with its centerpiece 75,000-gallon aquarium, scores the highest rankings of the Golden Nugget’s 11 eateries on Open Table.

Other eating places in this venue owned by Texas-based Landry’s include:

The Golden Nugget, which has gone through six renovations since it opened in 1964, is the largest resort in the downtown area, with a total of 2,419 deluxe guest rooms and suites.

But before you head to the elevators to check out your room for the next few days, stop by the world’s largest gold nugget which is still on display in the Golden Nugget lobby. The Hand of Faith weighs 875 troy ounces (61 pounds) and is the second biggest ever discovered.

The hotel, which was last renovated in 2014, offers much better room rates than most of the big names on the Strip, like the Wynn and Venetian:

Guests can earn tier credits and capture rewards with the Golden Nugget 24K Select card. Visit the 24K Select office to join for free. You must be 21 years of age with government-issued identification to become a member of the club.

Members will receive invitations to special events and promotions, as well as gaming, dining and hotel offers. These perks are all based on gaming history. In other words, high rollers earn a lot of comps.

Rewards cards are also available at major resorts on the Strip. Mlife cards are free at such resorts as the Aria, Bellagio, and Mirage. All Caesar’s properties — like Caesars Palace — use the Caesars Reward card.