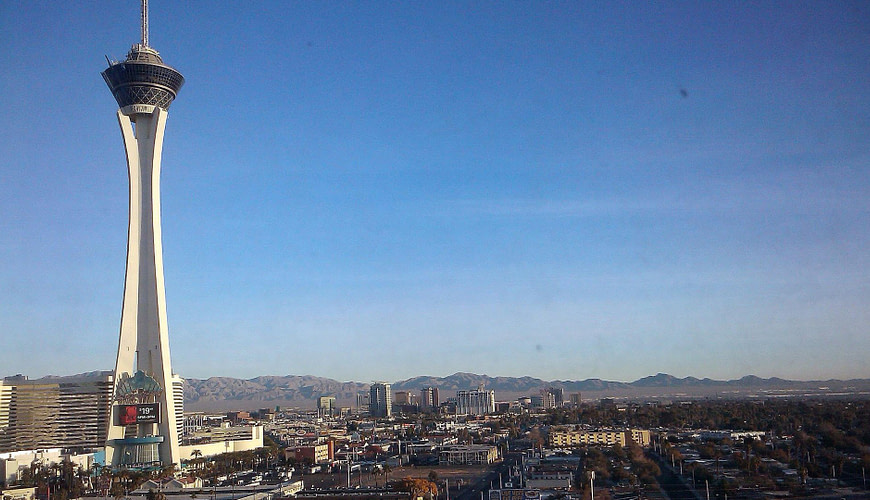 The Stratosphere builders have had “high” hopes for this property since its groundbreaking in 1991. Today, the 1,149-foot-tall structure is the largest freestanding observation tower in the United States and second tallest in the Western Hemisphere behind the CN Tower in Toronto. Inside it, you will find the Stratosphere Sportsbook.

The Stratosphere hotel and casino, which finally opened five years later in 1996, is located within the city limits of Las Vegas and just a short distance from all the mega-resorts and Las Vegas betting on the Strip.

The tallest structure in Vegas features a revolving restaurant and three thrill rides, plus a controlled-descent, bungee jumping-like experience where riders plummet almost three football fields attached to a high-speed wire. It costs $130 per jump, but the screams are free.

The Views from Observation Deck

The App Only Works in Nevada

For a resort that’s looking to draw guests and tourists with multiple heart-racing attractions, the Stratosphere Las Vegas sportsbook is certainly not one of them.

Stratosphere sports betting, which is located at 2000 South Las Vegas Boulevard, fails to make the grade in almost every category.

It’s a non-smoking venue, but the scents easily find their way into the Stratosphere sportsbook from the surrounding casino. It has seating, but it’s average at best with about 40 chairs and couches and room for 120 guests. There are two big screens on the main wall with dozens of smaller TVs around the area, but the picture quality is mediocre and the sound quality is poor.

One of the best sportsbooks in Las Vegas? Hardly. This would rank in the bottom third, especially when it’s compared to other venues at the north end of the Strip in the Wynn and Mirage or another nearby betting spot in the Westgate.

Players must be 21 years of age or older to wager anywhere in Nevada, including on Stratosphere entertainment esports on the William Hill Android App.

Pari-mutuel wagering, for horses and dogs, is available. This section, with individual monitors and desks, is located to the left of the main sportsbook area. Bettors for sports and horse racing can wager on the Stratosphere sportsbook odds at one of the four betting windows under the main viewing wall. Stratosphere sports lines are posted for the events of the day in the NHL, NFL, NBA, and MLB.

Nothin but Net with this Bet

However, players can take their action online and bet on the exact same odds through the William Hill Android App. The platform is not available on iOS devices. Also, Stratosphere online sports betting is only active in the state of Nevada.

The Stratosphere does offer complimentary drinks in this betting area. The soft rules call for a $100 bet on sports and a $20 wager on the horses to earn a drink voucher, which is more than other off-the-Strip venues like South Point.

It’s Game Time at the Stratosphere

The Stratosphere sportsbook is available for parties for major championships like the Super Bowl, Kentucky Derby, and March Madness.

Get the Hottest Odds

Here are some of the bets available at the land-based Stratosphere sportsbook:

There are even more betting options listed on the Stratosphere sportsbook online through the William Hill app, including “in-play wagering” where betting lines are listed for games already in progress. The odds keep changing throughout the game to the final score.

Local residents have been calling this resort by an abbreviated name for years. In February 2019, plans were announced to join the crowd and rename the Stratosphere as The Strat Hotel, Casino and SkyPod. The complex, which is owned and operated by Golden Entertainment, is located about midway from the Wynn at the north end of the Strip and the classic casinos in Downtown Vegas, which includes the Golden Nugget and The D.

Unlike most of the Strip casinos which are charging as much as $20 a day, the Stratosphere offers complimentary parking in its eight-floor garage.

Rideshare programs and the Las Vegas transit system are the best budget-friendly bets for visitors staying at the Stratosphere. Rideshare programs like Uber and Lyft are just a couple of clicks away on your mobile device. These apps, which are free to download, keep riders up-to-date on costs, time of arrival, and vehicle details. A one-way trip to your destination is likely to cost about two-thirds of a normal taxi fare.

Top of the World restaurant on the 106th floor of the Strat tower offers pricey steak and seafood with unparalleled views of the area as the restaurant revolves 360 degrees every 80 minutes. It’s the high end of a wide range of culinary choices at this thrill-seeking resort. There are many more eateries at the Stratosphere. Here is a sample of some at ground level and high in the sky:

Guests of the Stratosphere and previous members of the resort’s acePlay rewards program are free to join Golden Entertainment’s program called True Rewards. Golden runs nine casinos in southern Nevada, but the Strat is the only one in Las Vegas. Existing acePlay members are automatically moved into the new program as their cards are no longer active at the Stratosphere. There are five tier levels in the program, starting with True. The next levels in order are Loyal, Solid, Legit, and Epic. Cardholders earn points through casino play and purchases made at bars, restaurants, shops, hotels, and other Golden partners. There are other bonuses to accumulate points for members, including mystery multipliers and dividends for program loyalty.  Points that are earned throughout the calendar year can be used for cash, slot play and comps, such as a free stay at the Stratosphere.

The 80,000-square-foot casino floor at the Stratosphere draws a mix of tourists and locals with more than 1,300 slot machines and 54 table games. The gaming area is fairly dark and dated, but tourists like it because it’s budget-friendly and locals like it because it’s not on the congested Strip.
Gamblers will enjoy the $5 table minimums and the fact that complimentary drinks are quite easy to come by from friendly servers. Some of the table games available to play include:

Other table games on the casino floor include: Three Card Poker, Pai Gow Poker, High Card Flush, and Heads Up Hold’em.
There’s a high limit room for slot players, with denominations as high as $25. The Strat also has a 10-table poker room, where players can go all-in daily from 11 a.m. to 3 a.m.

Bob Stupak’s World Famous Million-Dollar Historic Gambling Museum and Casino first opened on this site in 1974. A fire two months later ended those dreams and started another as Stupak opened Vegas World in 1979. That resort was then merged in 1993 and renamed the Stratosphere. Golden Entertainment, which purchased the resort in June 2017, announced plans for a major renovation and renamed the resort to the Strat in February 2019.