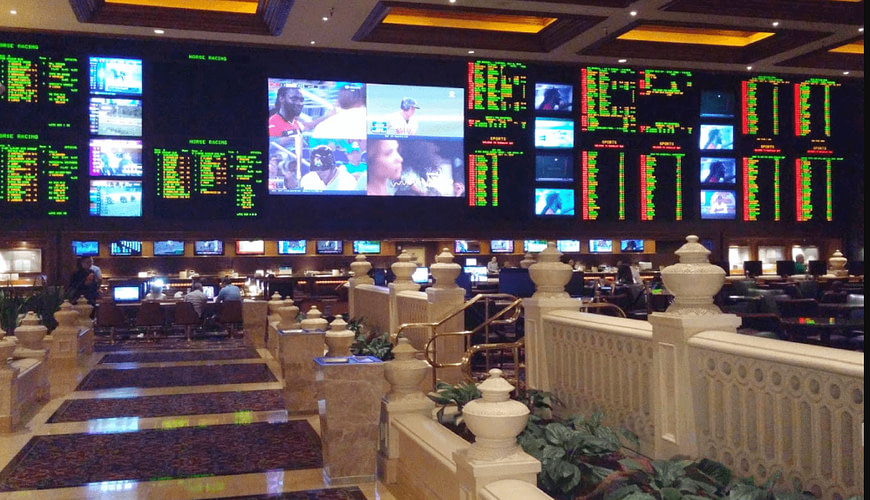 There’s not much down at the south end of the Strip, except the “Welcome to Las Vegas” sign, the two-million-square-foot Mandalay Bay Convention Center, the Mandalay Bay Sportsbook and its three hotels.

This resort could be one of the best for Las Vegas betting and it wouldn’t matter. Many visitors to this popular Nevada city dislike its location across from the international airport where a steady stream of jets accelerate for takeoff over the property’s plush top floors and Mandalay Beach.

Still, this is one of the flagship destinations for MGM Resorts International, even if it’s not in the middle of all the action on the Strip. Regardless to say, whenever you think of Las Vegas sportsbooks, the Mandalay is always near the top of the list.

No free drinks for small bettors

The Mandalay Bay sportsbook designates as much of this large room to horse racing as it does to sporting events, which is rare these days in Las Vegas.

Mandalay Bay sports betting is located at the west end of the huge casino floor and it’s a non-smoking area.

There are complimentary drink vouchers available but plan on betting at least $300 to get one. There’s a full-service bar in the Mandalay Bay Las Vegas sportsbook area along with the Turf Club Deli snack bar, which serves burgers and other sandwiches.

Players must be 21 years of age or older to wager anywhere in Nevada.

Is this one of the best sportsbooks in Las Vegas? It might be with horse racing fans, but the darkroom could use a bit of an upgrade.

Sectional odds boards are displayed among the 17 big-screen TVs on the main wall. The entire room seats about 300 guests, with simple floor seating on the main area and an elevated space by the bar. This spot includes countless seats with individual monitors.

The sportsbook is bordered by a poker room, but the activities in that area don’t interfere with those watching the many sporting events.

Bettors must first register at any of the nine MGM properties on the Strip to take their action online with the playMGM app, which can be downloaded to your Android or iOS device.

Mandalay Bay sportsbook odds are offered on all the major sporting events, including Mandalay Bay entertainment esports. But this platform, which is an IGT PlaySpot mobile solution, is only available in the state of Nevada.

The best online solution anywhere in the United States is the top-ranked site Bovada. This trusted provider has been in operation for years and offers members countless bonuses.

There are two entrances to the Mandalay Bay sports lines, one off the main casino floor and the other for those coming from the Delano Las Vegas suites.

On a typical weekday, there are a few betting windows open for sports and horse racing. The traffic picks up on the weekend, though, especially if there’s a major championship on the schedule.

Here are some of the sports with posted Mandalay Bay Las Vegas sportsbook odds:

Here are some of the bets available at the land-based Mandalay Bay sportsbook:

This type of betting has become a hot ticket at the Mandalay Bay sportsbook online and other Las Vegas venues, including the Bellagio, Westgate, South Point and Station casinos.

There are nine MGM properties on the Las Vegas Strip, including Mandalay Bay. They all offer the same free rewards card — Mlife.

Members gain exclusive access, benefits and rewards at all of the MGM venues by earning points for every dollar spent or gambled.

The starting tier, which is Sapphire (blue card), has limited benefits, but the rewards change at the next level called Pearl. These members are awarded discounts, dedicated line options at restaurants and buffets, and complimentary parking.

Members can continue the climb up the Mlife ladder into Gold, Platinum and the Noir level (black card). The higher the level, the more privileges on meals, room rates, and complimentary gifts.

Tier credits are accumulated from October 1 to September 30. If you advance to a higher tier at any time, you’ll enjoy those benefits for at least one full year.

The 43-story Mandalay Bay resort and casino is located on the west side of Las Vegas Boulevard, south of another MGM property in the Luxor. The rooms facing Interstate 15 also offer a perfect view of the 65,000-seat Las Vegas Stadium, the new home of the NFL’s Raiders.

MGM properties, including Mandalay Bay, started charging for parking in 2016. Like many amenities on the Strip, it used to be free.

Mandalay Bay, like other MGM resorts, does offer some discounts and complimentary parking to those that have an Mlife rewards card. The rewards vary on the status of the cardholder and the amount of money gambled or spent at the resort.

Public transportation and ride sharing programs are the best bet for visitors staying at Mandalay Bay. Ride share programs like Uber and Lyft are taking over market share from the more expensive taxi services.

With the fifth-largest convention center in the world and a 12,000-seat events center, you can be sure Mandalay Bay has some of the finest restaurants on the guest’s list. In total, there are 24 restaurants to choose from on the property.

Here are a few of the top restaurants and dining places at Mandalay Bay:

Here’s what’s on tap at some of the eight bars and lounges at Mandalay Bay: It’s getting more difficult to get complimentary drinks at high-priced resorts on the Strip. Expect to pay as much as $20 for a cocktail at one of these venues.

The tropical-themed property, which opened in March 1999, has more than 3,300 rooms, an 11-acre pool area and a saltwater aquarium. The dominant gold coloring of the Mandalay Bay hotel is a result of gold leaf used on the windows.

The 135,000-square-foot casino floor at Mandalay Bay has over 1,200 slot and video poker machines to choose from, including your favorite names.

There might not be another casino in the entire Las Vegas area that has as much room between the slots and table games as this resort. It’s quite comfortable to move around here with about a dozen restaurants and the House of Blues surrounding the main gaming area.

The minimums at table games will be as low as $10 on a slow night during the week but expect the betting minimum to climb as the place fills up. Some of the games available to play include:

There is also a high limit room, including a bar, for table games and slots. Table minimums start at $100 or $200 depending on the traffic, while the limit in the slots tops out at $100 a pull.

Complimentary drink service is offered to those playing the machines or table games. It’s best to tip for that courtesy if you want to be offered another one.