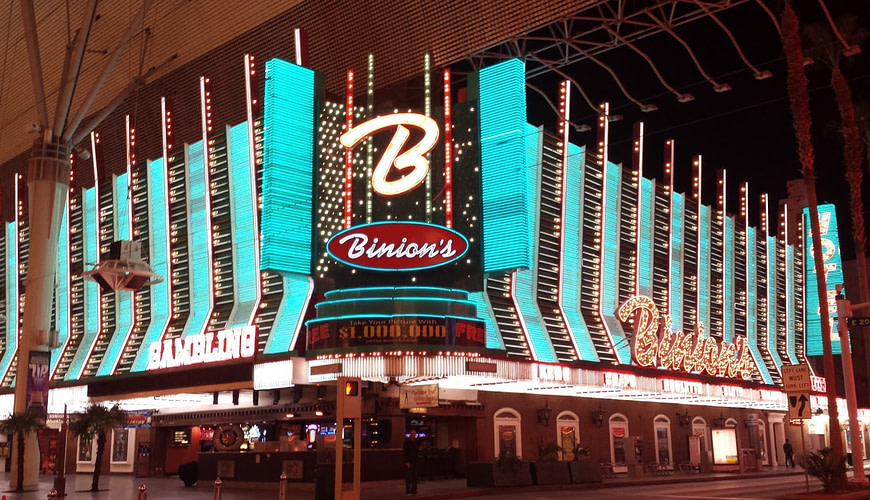 One of the cornerstones of the Fremont Street Experience and Las Vegas betting, Binion’s Gambling Hall (and Binion’s Sportsbook) has struggled in recent years with the perception it was closing the doors for good.

The property in Downtown Vegas, operated by TLC Casino Enterprises, put most of those rumors to rest in July 2019 with the opening of Hotel Apache and its 81 rooms which were shuttered at Binion’s in 2009 during the Great Recession.

“This is a big deal for us, a really important step for us to get the property back to where we want it to go,” said Tim Lager, the hotel’s general manager at Binion’s, which is also the once-proud longtime home of the World Series of Poker.

Excellent Steakhouse on the 24th Floor

App Only Works in Nevada

Binion’s Las Vegas sportsbook, located at 128 East Fremont Street across the street from the Golden Nugget, is in the same condition as the rest of the resort. It’s old, worn down, outdated and in desperate need of some attention.

The casino opened in 1951, and it looks like little has been done with Binion’s sports betting in all those years. This is not the type of place that will make you want to return a second time. It’s not even one of the best sportsbooks on the block, never mind in all of Las Vegas.

The Binion’s sportsbook’s location is one of the few positives of the room as it’s situated beside the newly relocated poker room and far removed from the noise of the main gaming area. Another negative, however, is the fact it does not offer pari-mutuel wagering.

The room is small at Binion’s sportsbook, which is run by well-known operator William Hill. There are about two dozen TVs on the front and right walls, but no big screens to watch the game of the day.

Players must be 21 years of age or older to wager anywhere in Nevada, including on Binion’s entertainment odds and esports betting lines on the William Hill Android App.

Seating is made up of four leather couches along with some club chairs. Behind that section are also some high tables and chairs. This is the only sportsbook on the Strip or downtown that still allows smoking throughout the venue.

Binion’s Las Vegas sportsbook odds are posted on television sets, and not the typical odds boards found in most betting parlors. There are four betting windows at the front of the room, but only one is usually open as there is little traffic here most of the time.

Binion’s sports lines are available on all the major events as their lines are identical to the ones provided by William Hill.

If players want to avoid sitting in the smoke in the sportsbook, they can take their action online with the William Hill Android App, which is not available on iOS devices.

Like all of the other advertised sportsbook apps in Las Vegas, the Binion’s sportsbook online is only active while you are in the state of Nevada. It’s one of the biggest reasons why a membership with top-rated online site Bovada is a much better bet when you return to your home state.

Considering all the negatives of the Binion’s Las Vegas sportsbook, it’s quite surprising that the rules for a complimentary drink demand a $200 bet. It’s just another reason to stay on the casino floor for that cocktail or head to another nearby resort like The D or any one of the 10 local Station Casinos.

Binion’s Las Vegas is one of the four pillars that stands at the corner of Fremont Street and Casino Center Boulevard in Old Vegas. The resort faces the other three iconic properties in the Golden Nugget, Four Queens, and Fremont Hotel and Casino under the Fremont Street Experience canopy. The casino is named for its founder, Benny Binion, whose family ran Binion’s Horseshoe from 1951 to 2004.

Parking at a lot at the back of the Binion’s property starts on the third floor. It’s $2 per hour for the first three hours, and then $10 as a flat rate for the next 3-24 hours. Valet parking is also available.

Visitors from out of town have many transportation options to get to their resort or other Las Vegas attractions after landing at McCarran International Airport. All of them can be found at the airport’s main terminal. The cost varies on the service and distance to your resort for the following modes of transportation:

It will be tough to equal the spectacular views from the Top of Binion’s Steakhouse, which is located on the 24th floor of the hotel tower. This gourmet restaurant with its vintage Vegas decor offers steaks, seafood and its signature dish of chicken fried lobster. There is also a chef’s daily special for $19.95, which you won’t find at the high-end resorts on the Strip. The steakhouse is highly recommended by reviewers on the restaurant reservation site Open Table. Here are some of the other dining places at Binion’s:

Guests of Binion’s Las Vegas are welcome to join Club Binion’s, which is the resort’s free rewards program. Members earn points and tier credits towards complimentary food and beverages, gaming tournaments, promotions, drawings, and offers for free slot play or non-negotiable chips. Members earn these rewards by gambling on Binion’s slot and video poker machines, table games, and live poker. One unique perk of the club card is the chance to have your photo taken with Binion’s $1 Million Display, which is located next to Club Binion’s. The display, which holds a million dollars in a pyramid design, is available for photos daily from 9 a.m. to 11:30 p.m. It contains 2,700 $100 bills, 34,400 $20 bills and 42,000 $1 bills. You must be 21 years or older to have your picture taken and receive a complimentary 6×8-inch glossy photo inside a souvenir frame.

It started as the Eldorado Club and Hotel Apache before Benny Binion bought the property in 1951 and renamed it Binion’s Horseshoe. The casino, which had a frontier setting, was the first in downtown Las Vegas to replace sawdust-covered floors with carpeting.   Today, the Binion family has nothing to do with the property anymore. Many of the games are the same, but the large casino is old and rundown. It begs the question of why you would want to gamble here at any one of the 800 slot machines? Other downtown venues have at least renovated their traditional properties, while Binion’s seems to rely on its location and classic atmosphere to keep people coming back.   Minimums are $5 at most of the table games on the casino floor. Some of the games available to play include:

There are a few other tables games, such as Big Six Wheel, High Card Flush, Let it Ride, Pai Gow Poker, and Three Card Poker.
Binion’s, as has always been its tradition, does not offer any high limit areas. Complimentary drinks for players are easy to obtain on the main casino floor. It’s always a good idea to tip for that cocktail if you expect a second round.

Binion’s 365-room hotel tower had been closed since 2009. The Great Recession and the costly task of removing asbestos were to blame. TLC Casino Enterprises, which owns and operates Binion’s and the Four Queens across the street, reopened the tower as Hotel Apache in July 2019.

“We need our current projects to get up and running, see the success of those to give us more confidence moving forward,” said Lager, the hotel’s general manager. “We’re here to protect this property and see it grow. It might mean that it grows in small steps, and if that’s the case we’ll go the safer way rather than take a risk.”

If you’re looking to make a bet at Binion’s sportsbook before moving on to other Las Vegas attractions, then this place has you covered.

If you’re looking for an enjoyable spot to make some bets, watch the big game with friends, have a few complimentary drinks and something to eat, it’s probably better to head down the street.

Bet on the NBA From Home

Here are some of the bets available at the land-based Binion’s sportsbook:

There are even more betting options listed on Binion’s online sports betting through the William Hill app, including “in-play wagering” where odds are listed for games already in progress. The betting lines for the money line and point spread keep changing throughout the game to the final score.