The crossroad of Tropicana Avenue and Las Vegas Boulevard has the most hotel rooms of any intersection in the world. The four resorts on the famous Las Vegas Strip — MGM Grand, New York-New York, Excalibur, and Tropicana (where you will find Tropicana Sportsbook) — are all linked by convenient overhead pedestrian bridges.

The Tropicana and its featured South Beach decor is home to a tropical pool complex, Laugh Factory comedy club, and the Tropicana Sportsbook. It may be a venue on the smaller side compared to all the mega-resorts, but it has everything visitors need for an exciting Las Vegas betting experience.

In the seventh James Bond film Diamonds Are Forever, 007 stays at the Tropicana, claiming it looks "quite comfortable." The movie, which stars Sean Connery, came out in 1971.

The resort, which first opened more than six decades ago in 1957, completed its most recent renovation in 2011 for $180 million.

At that time, the Tropicana opened a new sportsbook at 3801 South Las Vegas Boulevard, which is now operated and powered by CG Technology.

The old sportsbook was an enormous 9,000-square-foot room with plenty of seating. It was one of the biggest gaming venues in the resort at the time.

Today, it resembles a kiosk you might find in your neighborhood shopping mall. It’s small, with no seating, limited business hours, and few screens to even take a glimpse at the big game.

Instead of being in the discussion for one of the best sportsbooks in Las Vegas, the move from its former home definitely places it as one of the worst on the entire Strip.

“Maybe they will put in a real sportsbook after the new restaurant is done,” one reviewer said on Yelp as the former sportsbook space is now Robert Irvine‘s overrated Public House Restaurant. The new sportsbook earns a 1.5 out of 5 ratings from reviews on Yelp. The restaurant is graded at 3.5.

Smoking is allowed around the Tropicana Las Vegas sportsbook since it is part of the main casino floor. The Tropicana sportsbook hours are daily from 12 noon to 8 p.m., but they are extended during football season.

Players must be 21 years of age or older to wager anywhere in Nevada, including on Tropicana entertainment odds, esports or real sports betting lines or any other gaming platform in Las Vegas. Tropicana sports lines, which are also limited in size like everything else at this venue, take up more room than the televisions.

This is a terrible excuse for Tropicana sports betting. I have stayed at this budget-friendly resort many times and would never make a bet here. It’s easier to just cross over to MGM Grand — which offers longer business hours and competitive odds — and get in on the action there.

The Tropicana sportsbook — located across from the Public House which replaced it — is surrounded by slot machines and a tournament slots room. The book offers pari-mutuel wagering, daily games, sports futures and some proposition wagers, particularly for major sporting events.

Complimentary beverages are offered with a voucher, but they’re getting harder and harder to come by on the Strip. The Trop requires a $50 bet on horse racing or $200 wager on sports, but it’s still a better deal across the street at MGM Grand.

Guests also have the option of registering for Tropicana online sports betting, which is available on CG Technology’s CG Sports app. Deposit money into your new account at the Trop or any of the other CG Technology sportsbooks on the Strip like the Cosmopolitan and Lagasse’s Stadium at the Palazzo, and download the app to your Android or iOS device.

However, the online app is only good for sports betting within the state of Nevada. You won’t be able to take advantage of the Tropicana sportsbook online if you live anywhere else in the United States. 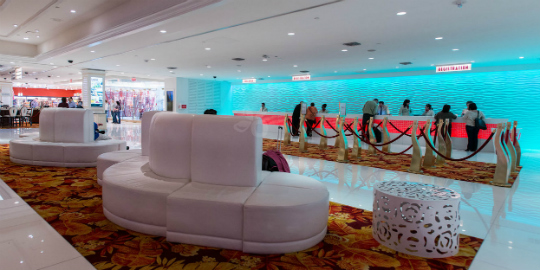 The tiny Tropicana sportsbook is easy enough to locate just steps away from the main check-in area for the resort. Players can expect to find just one betting window open during business hours, but at least the lineups are short.

Tropicana sportsbook odds are found behind the venue in a display that holds the betting lines of the day and futures for all the upcoming major championships.

Here are some of the sports bettors will find with posted Tropicana Las Vegas sportsbook odds:

Here are some of the bets available at land-based Las Vegas sportsbooks powered by CG Technology:

The minimum wager for any bet is $5 on the CG Sports app, but $10 at most land-based sportsbooks. But the biggest bonus of playing online is access to live betting, where the money line, point spread and over-under totals change even after the game has started.

CG Technology permits bets on tablets that do not have data plans. Wagers may be made over a wireless Internet connection as long as it is in Nevada.