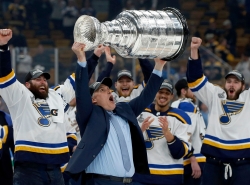 One the National Hockey League (NHL) regular season is wrapped up, bettors look to the NHL Stanley Cup betting odds for inspiration. The most exciting time of the year for hockey fans and Stanley Cup playoff odds are some most popular betting lines in the North American sports schedule.

The odds to win the Stanley Cup 2020 are available. The current Stanley Cup odds are displayed but are subject to change, so ensure to check back with this page as often as possible. The odds were lasted updated on July 6, 2020:

The Stanley Cup playoffs consist of four rounds of best-of-seven series. In order to ensure consistency and fairness, each playoff series is played in a 2-2-1-1-1 format, which means the team with the home advantage hosts games on, two, five, and seven, while the opposing team hosts game three, four and six.

This format, coupled with the fact there are eight teams in each conference that go on to play in the post-season means there are excellent betting opportunities available to those fans that want to wager on the odds to win the Stanley Cup.

Based on the Vegas Stanley Cup odds, the Boston Bruins and the Tampa Bay Lightning are the favorites to win the 2020 competition according to the latest odds from MyBookie. As well as providing betting lines for the post-season, MyBookie also covers another exciting hockey betting market the NHL Draft.

There are 31 teams in the NHL each season. Teams compete for the top 12 places in both the Eastern and Western conferences, with the aim of making those spots to go on to the qualifying rounds to determine the 16 teams that will compete for the Stanley Cup.

The top four clubs in each conference will play off for the first-round seeding using standard overtime rules, while the remaining eight squads in each conference will participate in a best-of-five series to advance to the first round of the playoffs. The competition is fierce and it’s not unheard of for Stanley Cup favorites to lose out in the early stages of the playoffs.

In order to keep the competitors isolated, each conference is given a “hub city” which is designed to operate as a bubble for players and staff. There is accommodation, practice facilities, gyms, and transportation to the ice when the time comes all provided at each hub.

2020 Stanley Cup odds favor Boston’s finest the Bruins to lift the Stanley Cup for the first time in almost a decade. According to the oddsmakers at Intertops, there is very little in the competition with the Knights and Lightning trailing just behind.

Before the NHL season starts, bettors are already given the opportunity to wager on NHL futures odds. The NHL odds to win the Stanley Cup are released early and bettors flock to take advantage of the great rates on Vegas’s early predictions for the team to lift the coveted cup.

Futures bets often confuse new players, as they try to make sense of the terminology. However, it’s very straight forward. Futures bets are the same for all markets, whether the bettors are playing the NFL odds or the NHL odds, a futures bet entails betting on a future event way in advance of it starting. More often than not, these types of bets are for outright winners of tournaments or leagues. Though, on occasion, there are a variety of interesting prop bets to wager on too.

For those that are ready to start wagering the odds to win the Stanley Cup, we’d suggest looking through our list of NHL betting sites for the latest and greatest betting lines.

Once you’ve selected your sportsbook of choice, you’ll find the NHL Stanley Cup odds displayed something like this;

Moneyline bets are less common when looking at a futures bet like the NHL Stanley Cup winners odds. This isn’t to say it’s not a possibility. But, all moneyline bets with a “-” symbol to indicate a clear favorite are uncommon with many games still to play in the regular season, and the outcome of the Stanley Cup very unpredictable.

Moreover, the NHL playoffs are particularly unpredictable, so oddsmakers are wary of the fact setting favorable odds for one team may come back to bite them as the season progresses. The best advice we can give regarding Vegas odds for the Stanley Cup is to get in there early. The closer the season gets to the Playoffs, the more the odds will shift.