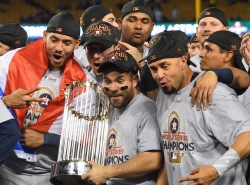 It’s only been a few months since the Houston Astros won their first American League pennant and World Series title, but the team from Texas has made a few moves in the offseason to help retain that crown.

National League teams have won six of the last 10 World Series, but the American League has had the bragging rights in 11 of the last 20. Three of the last four Falls Classics have gone to the seventh and deciding game to declare a winner.

With spring training in full swing in Florida and Arizona, it’s time to take a look at the odds boards for the 2018 World Series (odds provided by TopBet).

How far can these young stars take the Astros? They are the favorites on the betting boards at +500, with the New York Yankees next at +550. The Los Angeles Dodgers, who lost to the Astros last season, are slotted at +600 along with the Chicago Cubs.

The teams with the highest odds are the Miami Marlins at +50000 and the Detroit Tigers and Kansas City Royals at +40000. That means a $100 bet on the Marlins would return $50,100 if they can win it all — kind of like betting on the NFL’s Cleveland Browns to win the Super Bowl.

The odds will change throughout the season. Those numbers will be influenced most of all by wins and losses, but injuries and suspensions also play a role. Just remember: No team has repeated as World Series champions since the Yankees won three titles in a row from 1998-2000.

Who will win the World Series?

Let’s take a look at some of the top teams, starting with the defending champs.

There isn’t a team in baseball with a better trio than George Springer, Jose Altuve and Carlos Correa. It wasn’t a fluke that the Astros led both leagues in runs scored last year.

Houston added all-star pitcher Justin Verlander at the trade deadline last year. Now they’ve bolstered their starting rotation with the acquisition of Gerrit Cole, whose best year with the Pittsburgh Pirates was 2015 when the right-hander went 19-8 with a 2.60 ERA.

The Astros were one of three teams to win 100 or more games last season at 101-61, including an impressive road record at 53-28. Minute Maid Park will be rocking again this season.

If any team is going to knock off the Astros in the AL this season, here is the frontrunner.

The Yankees landed the biggest prize this offseason in home run king Giancarlo Stanton, who hit .282 with 59 home runs and 132 RBI with the Miami Marlins. He joins young star Aaron Judge, who smashed 52 homers and 114 RBI. Add in Gary Sanchez and Didi Gregorius and the Bronx Bombers are back in grand style.

The Yankees pushed the Astros to the limit in the ALCS last year. They will need a solid season out of their starting rotation to dethrone the champs.

It’s been 30 years since the Dodgers last won the World Series. They lost the deciding game in last season’s Fall Classic after winning 104 games in the regular season — the most in all of baseball.

The Dodgers have done little in the offseason, but this lineup should be more than enough to win a sixth straight NL West pennant.

The nucleus of former MVP Kris Bryant, Anthony Rizzo and Jon Lester is still intact, but management has made few moves to improve the club, outside of adding starter Tyler Chatwood and relievers Brandon Morrow and Steve Cishek.

The Cubs and their starting rotation will have to improve to make it to the playoffs for a fourth straight season.

This is VGB’s long shot selection all because of one player — the addition of “Japan’s Babe Ruth” in Shohei Ohtani.

The Angels have arguably the best player in baseball in Mike Trout. Finally, he might have some help with Ohtani, who signed as an international free agent with Los Angeles.

Ohtani is expected to bat in one of the lineup’s power positions and also handle starting pitching duties. With newcomers Ian Kinsler and Zack Cozart added to the mix, the Angels may make the playoffs for just the second time in nine seasons.

The lineups in Las Vegas sports book are a little longer this week as bettors make last-minute decisions on their Major League Baseball prop bets and futures. From the Westgate and Wynn on the north end of the Strip and Mandalay Bay and MGM Grand to the south, these venues all have the defending champion […]

Earliest Start To Baseball Season Ever As Major League Baseball gears up for the earliest Opening Day ever on March 29, baseball bettors gear up for season-long wagers like team win totals and divisional champions. The early start will create additional off days for teams throughout this season. As a result, all 30 clubs will […]

Three Teams Won Over 100 Games Last Season Three teams eclipsed the 100-win marker last season, and yet none are projected to reach that lofty plateau in 2018. The Los Angeles Dodgers led the major leagues with 104 victories, followed by the Cleveland Indians at 102 and the World Series champions from Houston with 101. The […]

Fall Classic Goes The Distance In L.A. It’s only fitting that one of the most exciting World Series ever would go the distance. The Los Angeles Dodgers forced a seventh and deciding game in the 2017 Fall Classic with a 3-1 victory Tuesday over Houston ace Justin Verlander and the Astros. Game 7 is Wednesday […]

Two teams with 100 regular-season wins have earned a spot in the World Series for the first time in 47 years. In 1970, the Baltimore Orioles (108 wins) beat the Cincinnati Reds (102 wins) in five games to win the championship. Two former Cy Young award winners hook up in Game 1 of the 2017 […]