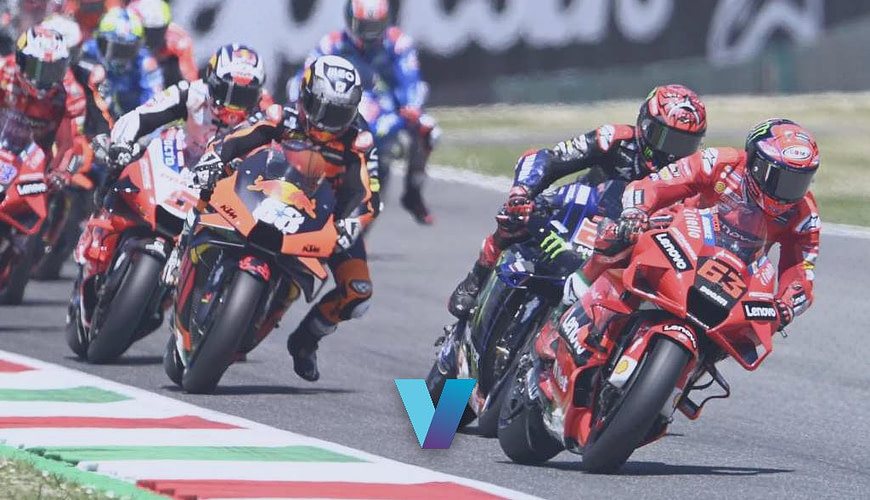 So, the MotoGP Season Matchups Update means the season is officially on a break. After the Dutch race, the next MotoGP race is in early August. That will be the British Grand Prix than a continuation of the Europe leg for three more races. It seems hard to believe that despite what happened in the Netherlands — that we would say to still use a MotoGP Season Matchups Bet on Quartararo.

Below, we present some MotoGP season matchups for the 2022 Championship. This reveals some safer scenarios, a long shot, and what feels like another nod to Quartararo. Some riders have fallen flat during the European leg while others keep surprising. Also, our Vegas news and bets now feature MLB action, cycling, and much more. Even July is never dull.

Did Fabio Quartararo hit a speed bump to repeating at the Netherlands? There is something about how Quartararo matured since the tour has returned to Europe. Now, his risks burned him at TT Assen but the Frenchman understood his wrongs and looked hellbent on using the break to recharge his batteries.

Earlier in the season, the Frenchman had some doubters when it came to repeating after his first MotoGP World Championship. The 2022 season had not quite gotten off to the start he had expected. As a matter of fact, before the circuit returned to Portugal, Quartararo was not even in first place in the standings. The Italians were dominating the roost in the early going.

Quartararo roared out of Portugal with the victory which boosted his fortunes. Europe provides the biker with quite an advantage as his Yamaha carries tons of speed on these tracks and his familiarity does not hurt either. Even coming back from the break, the next four tracks are in Britain, Austria, Italy, and Spain. Those bookend tracks are ones he has enjoyed good past success at. There is this to consider in Britain as well.

The big thing at VegasBetting is to look at the overall big picture. Here is why. Some still believe that Aleix Espargaro or Francesco Bagnia may still take the crown. Despite a rare DNF at the Dutch, the French rider still has a 21-point lead over Espargaro (-240 odds) and 66 over Bagnaia (-280 yet safer choice). With the next four races on tracks he mostly excels in, that makes him tops on our MotoGP Season Matchups Bet list.

Aleix Espargaro is still a name to look at for the 2022 MotoGP Season Matchups. The Spanish rider is now 32 years old. However, Espargaro has overcome so much to contend this year on his Aprilla bike. His consistency has been his biggest attribute but since his win in Argentina, the Spaniard still cannot get on the podium. For further insult, Francesco Bagnaia has surfaced again after a victory in the Netherlands and this matchup is on!

Now, both MotoGP riders have been plagued with misery this season. This breakout season from Espargaro showed that one amazing moment when he made a double pass at the Dutch Grand Prix. It helped him to a fourth-place finish but is that enough? He still was quite a ways off from the winner of the race. That was Bagnaia who raced his Ducati to victory. The Italian was just faster all weekend and could pave a trend of sorts.

These past seven races have revealed something important. When Bagnaia can cut off the mistakes, he can be the worthwhile challenger to a racer of Quartararo’s class. While Aleix Espargaro has all the consistency, does the Aprilla rider start taking too many risks if the title chase starts getting out of reach again? The Spaniard got a little bit lucky but Bagnaia has more experience in this realm.

With that mouthful, both riders appear to have the resolve to compete. This is because, unlike most of the other contenders, Espargaro can stay in races. Then again, it is just hard to look away at a rider like Bagnaia who has the potential to string some wins together. There is the race coming up in Austria but especially Italy where Bagnaia history has a big edge over the Spanish rider. Bagnaia has the greater value in this MotoGP season matchups Bet.

What About Johann Zarco Over Jorge Martin?

Again, there are some other names to take a look at for another MotoGP Season Matchups Bet. One has to consider Johann Zarco. Jorge Martin just does not quite have the consistency of the Frenchman. Zarco, if not for Quartararo would be the top French biker on the 2022 MotoGP Circuit. That being said,

Both bikers have seen their World Title numbers lengthen a good bit. Zarco jumped from +1000 to +4000 while Martin mushroomed from +2500 to +20000. Again, Martin just cannot get enough results and furthermore is 23 points behind an emerging Zarco. Now, Zarco has improved almost every race (aside from the Netherlands). He has five top-fives and two seconds in the previous seven races. He can easily hold off Martin.

That being said, Zarco is an easy choice here and if other matchups should pop up with him, take the bet at likely plus money. The biker carries value against the Italians, especially Bastianini and might overtake Espargaro by the season’s end.

Our MotoGP Season Matchups Bet For The 2022 Title

Take Fabio Quartararo as our best option to beat all comers in any matchup this 2022 title season.

See the best online betting sites, like BetOnline, where you can wager on these MotoGP season matchups bet and plenty of other events as July rolls along.