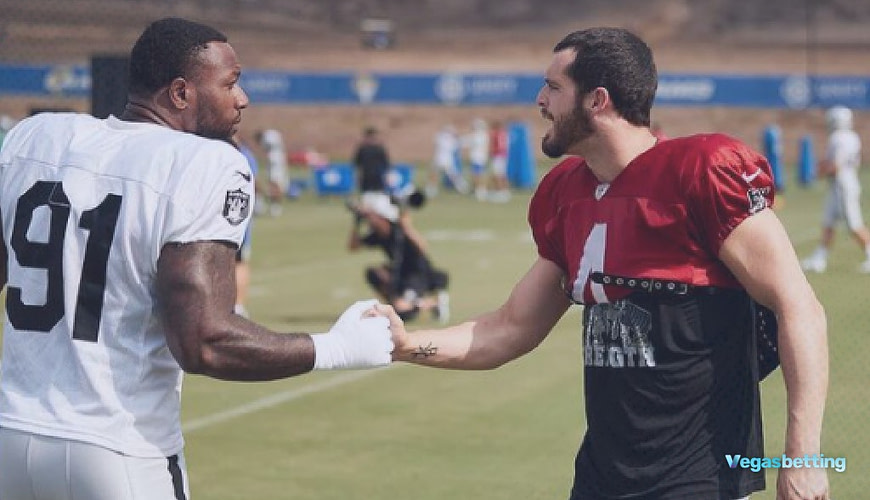 It goes without saying, but the 2021 season for the Las Vegas Raiders has turned completely upside down. After the team started off the year 3-0, they’re now 5-4 on the season, going 2-4 in their last six games. Yup, the Vegas Raiders AFC odds getting worse and worse should come as no surprise, as the team has faced so much adversity this year. With that said, it’s getting truly disappointing for all the fans out there.

Thanks to their recent slide, the Raiders hold terrible odds to win the AFC West these days. This is of course troubling for the team, as they were considered among the favorites after they started off the season so well. Derek Carr was throwing the ball all over the field, while the defense was playing with a ton of swag. Since then, things have flipped upside down.

This was showcased in the Week 10 loss to the Kansas City Chiefs. This was supposed to be an epic showdown on Sunday Night Football, with Carr and Co. ready to try and take down Patrick Mahomes, Tyreek Hill, Travis Kelce and others. Instead, the Raiders completely blew it in this one and suffered a 41-14 loss. While the Chiefs figured to win, everyone thought the Raiders would keep things close.

Instead, Kansas City rolled to a 27-point win. This game was played in Las Vegas too, making it all the more rough for all the Vegas fans. They simply could not stop Mahomes, as the superstar quarterback went on to throw for five touchdown passes. The Raiders made Mahomes look like his old self, as he really looked brilliant in the win for Kansas City.

Right now, no one is giving Vegas a shot to win the AFC West this season now, as they hold +700 odds. This is behind Kansas City and Los Angeles, and in front of Denver. It’s looking like the Chiefs should go on to win the division. For the Raiders, they’re going to have to wake up and try and turn things around if they even want to make the playoffs. That’s looking like a stretch too, with their NFL playoff odds also getting lower.

It goes without saying, but the Henry Ruggs incident has clearly taken its toll on the team. As most of you know by now, the superstar wide receiver was drunk driving at a high speed earlier month, resulting in the death of a 23-year-old woman. Now, Ruggs, who has since been released by the team following the incident, is facing multiple felony charges because of it.

Ruggs was a first-round pick in 2020 and was really coming on strong this year. The former Alabama standout had an incredibly bright future with the team, but one terrible mistake on his part has cost him his career with the Raiders. Now, we’ll likely never see him on an NFL field again, as Ruggs is facing some serious jail time. This has been tough to see for all the Raiders players, especially Carr.

“I will always be here for him. That won’t change, and I will prove that over the course of time to him. Not to anybody else,” Carr said of his now former teammate. “But he needs people to love him right now. He’s probably feeling a certain type of way about himself right now, and he needs to be loved. And if no one else will do it, I’ll do it.”

Following the incident for Ruggs, the Raiders have lost back-to-back games. First, the team traveled to East Rutherford, N.J. to take on the New York Giants, with the G-Men recording a stunning upset win over Vegas. Then in Week 10, the Raiders simply couldn’t get things done against Kansas City. Moving forward, we’ll see if the Raiders can regroup, but less people are visiting NFL football betting sites to place money on them.

Raiders are in a must-win this weekend against the Bengals

While things have gone rough for Las Vegas, the Raiders are in a must-win this weekend against the Bengals. Cincinnati has also been in a bit of a rough patch, but quarterback Joe Burrow and superstar wideout JaMarr Chase are always ready to put on a show. The AFC North team has a chance to blow up offensively whenever they hit the field.

This could prove to be a problem for Las Vegas, but they’ll be ready to try and get back in the win column. With the Raiders at 5-4, they really need to take advantage of their home games. If they can get back up to 6-4, two games over .500, then fans would have some hope of them being able to close out the season on a strong foot. However, with another loss, it’d really be problematic.

In Week 11, Carr knows there will be pressure on him. With that said, guys like Josh Jacobs, DeSean Jackson, Hunter Renfrow and others will also look to try and step things up for this team. Should the Raiders lose, however, then their NFL Vegas odds will continue to dwindle and the hope for the postseason will continue to shrink among the team’s supporters.