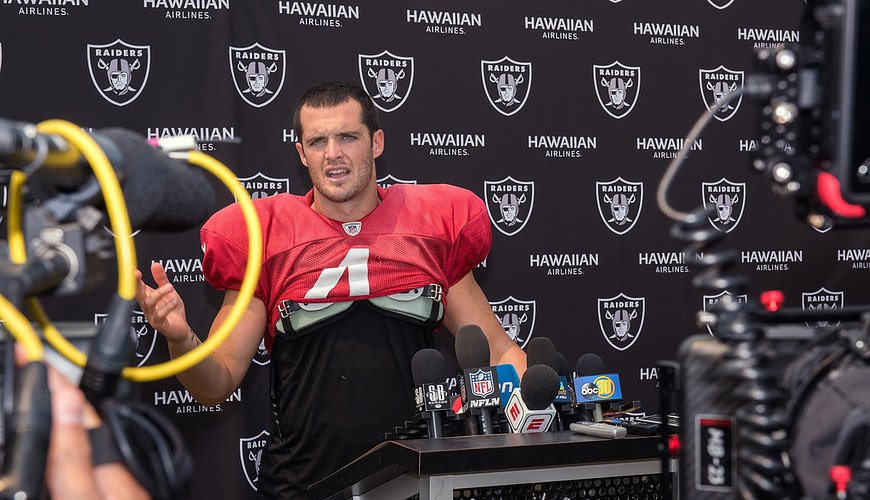 While Las Vegas Raiders fans were dealt with some rough news this month following Jon Gruden resigning from his post for offensive e-mails he sent out, some other concerning news has arrived. That’s because Las Vegas Raiders QB Derek Carr is in no rush to sign an extension with the team. Carr, in the middle of a five-year, $125 million deal, has said he wants to wait until after the season to try and think about his future.

It goes without saying, but Derek Carr extension talks can’t become another issue for Vegas the rest of the way. The fact that we’re already talking about this proves it has become a bit of a distraction for the fanbase. With this coming along with the Gruden news, it’s a tough pill to swallow for folks in Sin City, plus the die-hard Raiders supporters who still follow the team from Oakland.

When Carr signed his $125 million deal with the organization, it made him the highest-paid player in the NFL at the time. Others have cashed in with higher amounts since then, but that contract that he received proved just how much faith the Raiders had in Carr. Per multiple reports, Carr has informed the front office that he just wants to focus on the rest of the season and not worry about his current contract.

Moving forward, Carr is under contract for the rest of this season and the 2022 campaign as well. However, once the offseason arrives next winter, Carr will become an unrestricted free agent if he and the Raiders aren’t able to get their heads together and finalize something new beforehand. If Carr were to make his way to free agency, there’d no question be countless teams who would be ready to sign him.

Thus far this season, Carr has been fantastic for Las Vegas and the team’s supporters have been really happy with his play. As of this writing, the Raiders are 4-2 on the year. In Week 6, the team took down the Denver Broncos in convincing fashion, With Carr throwing for two touchdowns. Through six contests in 2021, the star signal-caller has thrown for 1,946 yards (second in the NFL) plus 10 scores.

Things really are hand in hand here, as the Raiders can’t let the Gruden news impact Carr’s decision moving forward. He and his former head coach had an incredibly close bond, which was evident whenever the two guys took the field together before a game. Even in press conferences, you could tell how much they enjoyed working together. Now, though, Gruden is out of a job, and Raiders fans are moving forward themselves.

As a whole, the team clearly didn’t let things have a negative go for them in the Week 6 game against Denver. A lot of outsiders out there thought that the Broncos would be able to take advantage of all the drama going on in the Las Vegas locker room, but Carr and Co. looked strong. Las Vegas was able to record its 34-24 win. Surprisingly enough, Carr said the team was brought closer together despite the drama.

“We needed a win bad this week,’’ Carr said right after the win going up against Denver in Week 6. “Sometimes when you get punched in the gut, it’s hard to bounce back. But we were able to do it. If anything, it heightened our intensity, it heightened our focus.”

The fact that Las Vegas was able to overcome the Gruden news and bond together with one another sure is big. At the same time, this should give Raiders fans plenty of hope that Carr isn’t going to let Gruden resigning affect his decision on whether or not to sign a new deal with the team or not. The fact that Carr is stepping up like a team leader and unifying everyone sure is great to see, especially with NFL odds open on a replacement coach going wild.

Another positive for the Raiders here is that Carr has previously said he doesn’t want to play anywhere else and that he seems himself retiring with the organization. Again, that came before Gruden left the team, though. Despite that, it’s more than clear that Carr loves putting on the black and silver jersey. Will that love be enough to ink another monster contract with the team?

“I want to do it here,” Carr said last June when asked about his future with the Raiders. “I probably would quit football if I had to play elsewhere. I’d rather go down with the ship if I had to.”

The other thing the Raiders want to focus on is that Carr is only 30 years old. By the time the 2023 season arrives, which is when he’d be in line for his new contract, he’d be 32 years old. That’s still quite young for a QB, especially when you look at what Aaron Rodgers and Tom Brady have been able to do. They’re two of the best signal-callers around right now. Plain and simple, though, the Raiders have to find a week to keep Carr around for the long haul.