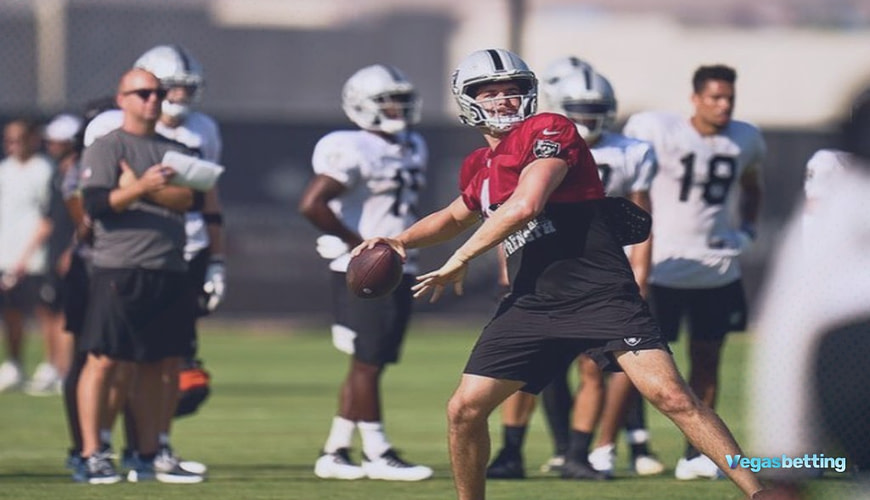 Oh the Las Vegas Raiders have kept their season alive thanks to the beautiful right arm of Derek Carr and strong right leg of kicker Derek Carlson. The team was down late to the Cleveland Browns and nearly lost in Week 15. Yet, with the game on the line, the Las Vegas Raiders kept their playoff odds alive with the Monday win on the road against the Browns. This game will be talked about for a while.

Raiders still have postseason hope thanks to Monday’s victory

Make no mistake about it, the Raiders still have postseason hope thanks to Monday’s victory on the road against Cleveland. While Las Vegas is out of the hunt for the AFC West title, that doesn’t mean they can’t go on a run to try and grab one of the AFC Wild Card spots. Remember that this year there will be three teams in the Wild Card instead of just two.

This is of course huge for Las Vegas, especially as they’re battling Cleveland for one of those positions. That’s what makes the Week 15 win so massive. While the Las Vegas odds to make the postseason haven’t been updated as of this writing, they have kept their season alive. A loss to Cleveland would have been catastrophic. With that said, Carr was able to lead the team on one final drive to set up Carlson’s game-winner.

“We love you guys here in Cleveland,” Carr said after the win on Monday night. “It’s chilly Cleveland. You guys (fans in the stands) came out in full support and those of you supporting us from home, we thank you guys. We pulled out the victory. It wasn’t pretty, a little adversity, but that’s what we like. God bless you guys and go Raiders.”

Carr himself had a bit of an up-and-down game, as he finished things throwing for 236 yards and one touchdown. However, also tossed an interception late in the fourth quarter, as he was trying to find Zay Jones for a deep bomb. In addition to that interception, Carr also turned the ball over on a fumble. He’s got to clean things up, but at the end of the day, he made plays late to give his team a chance for the victory.

Raiders have three games left to lock in the playoffs

Things really are coming down to it, as the Raiders have three games left to lock in the playoffs. Luckily for the team, two of the final three games for Las Vegas will be played at Allegiant Stadium over in Sin City. Following that win over Cleveland, the Raiders will next host the Denver Broncos this upcoming Sunday. It’s a massive AFC West tilt and it will also have big Wild Card implications.

According to the top Las Vegas betting sites, the Raiders are slight favorites with their -120 NFL Vegas odds. For the Broncos, they’ve been set at +100. This really tells us that this will be a back-and-forth affair. In order for the Raiders to record a win, Carr is going to have to play quite well. He can’t turn the ball over either, which is going to be key.

What has some fans worried is that Denver has an amazing defense. They’ve been keeping teams in check in recent weeks. With that said, when the Raiders and Broncos faced off earlier this season, Carr tossed for more than 300 yards and two touchdowns. That game came on the road too. Will Carr be able to have that kind of a game against in Week 16?

Following the contest vs. the Broncos, the Raiders will then head to Indianapolis to take on the Colts. Then, they’ll close out the regular season in Week 18 going up against the Los Angeles Chargers. Depending on how things shape out over the next two weeks, Las Vegas’ game against the Chargers could determine whether or not they keep their NFL playoffs odds alive or not. Stay tuned.

In closing, we’ve simply got to point out that the pressure is on for Carr to step up and get it done for the Raiders. He’s been quite inconsistent in recent weeks, but that simply can’t happen down the stretch. This weekend, he’ll have a golden chance to silence his haters if he’s able to record a strong win over Denver. That win will skyrocket the team’s postseason hopes.

On top of that, don’t forget that Carr’s contract is all set to expire at the end of next season. Las Vegas and Carr haven’t been negotiating, as they made it more than clear that they wanted to focus on the 2021 campaign and then deal with contract talks this winter. Well, Carr can earn himself quite the payout if he gets Vegas to the playoffs and stars in doing so.

However, if Las Vegas fails to make it in, would the team really be willing to break the bank to sign him? They’re not going to give him a multi-year contract if he can’t live up to things. With the high price tag for QBs this day, Carr is going to play at a high level to back up the money he’s potentially going to receive. This just adds to the intrigue on how he’ll close out the year.

It’s not just on him, though, as he’ll need help from guys like Josh Jacobs, Hunter Renfrow, Bryan Edwards and others. The hope is that Darren Waller can return from his injury soon too. If that happens, and Waller can make plays like usual, it could really help out Carr and the Raiders for the long haul.