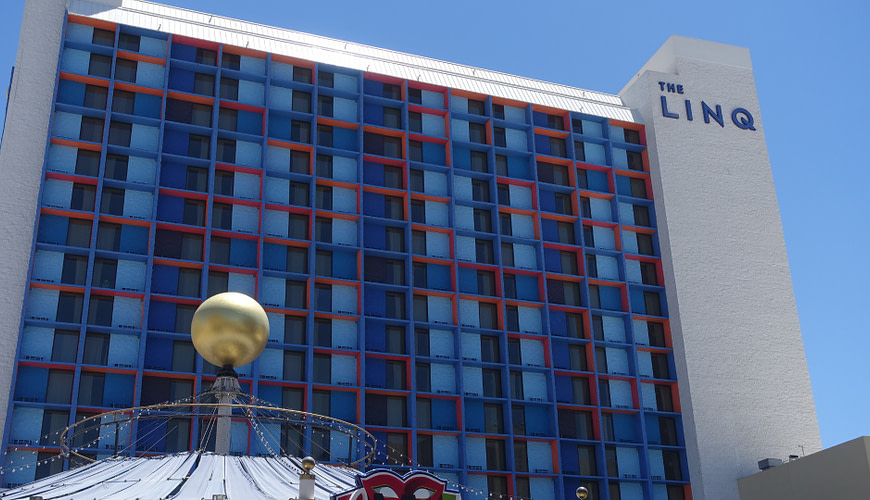 Formerly the Imperial Palace and Quad, the Linq Las Vegas takes aim at the budget-friendly crowd. The property in the heart of the Strip offers a modest casino, Linq Sportsbook, a pool, Las Vegas betting, and Guy Fieri’s only Las Vegas restaurant.

Some of the rooms are a little worn and smoke can linger in the common areas, but a lot of money has been injected into the rebranding of this resort and its surrounding area. It’s now a tourist attraction with thousands of daily visitors (partiers) finding many things to do and places to eat at the Linq Promenade.

This area between the Linq and Flamingo now has two of the top attractions on the entire Strip — with the High Roller ferris wheel and the Fly Linq Zipline.

Wide Range of Rooms for all Budgets

The Linq Las Vegas sportsbook may not be one of the best sportsbooks versus the mega-resorts on the Strip, but it is certainly the most improved.

The entire Linq sports betting area, which is located at 3535 South Las Vegas Boulevard, was reduced in size and relocated to another part of the main casino floor near the doors of the promenade in a $223-million renovation in 2014. The planners in the rebranding did a fantastic job with this new, unique betting area.

It is vastly different from all the dozens of other sportsbooks in the area. While other major venues like the Wynn and Mandalay Bay offer stadium seating in a huge room, the Linq has one main area with three large pillars. There are a 98-inch LED flat-screen on each of the four sides of the pillar, with each including “living room” seating on plush couches and chairs.

Three pillars with four separate areas equal to 12 rentable “Fan Caves” for up to six guests. The big screen can be split into four viewing areas with multiple sporting events on each space. Those screens can also be used for game consoles, virtual reality, and Xbox play. Each station comes with an iPad to place bets, order food and drinks, or control your audio and video displays.

Players must be 21 years of age or older to wager anywhere in Nevada, including on Linq entertainment esports and all the Linq Las Vegas sportsbook odds.

Get the Hottest Odds

The new setup offers four options to place a bet with the first being the iPad at your location. The Linq sportsbook also has a small kiosk of betting windows and an interactive display where gamblers insert cash and punch out their own tickets.

The fourth option is to download the Mobile Sports at Caesars Entertainment app and use the Linq sportsbook online. Here, Linq sportsbook odds can be viewed on your Android or iOS device, including all the popular wagers for “live betting,” where the odds change from the pre-game betting lines throughout the event.

Linq online sports betting is only available in the state of Nevada. You won’t be able to make a bet on the app if you head home and live in another state.

Complimentary drink vouchers are a little easier to obtain at the Linq compared to other Strip sportsbooks like the MGM Grand and the Cosmopolitan. Bet at least $100 on sports or $20 on the horses to get that free drink here.

It’s Game Time at the Linq

Most of the “living rooms” are open to guests to sit and watch the games during the week. Groups will rent and reserve these stations on NFL Sundays and for major championships — like March Madness and the Super Bowl. You can still watch the games on the big screens if you’re willing to stand behind these seating areas.

Here are some of the sports bettors to bet on at the Linq Las Vegas sportsbook:

Here are some of the bets available at the land-based Linq sportsbook:

There are even more betting options listed on the Linq sportsbook online through the Caesars app, especially prop bets and “in-play wagering.”