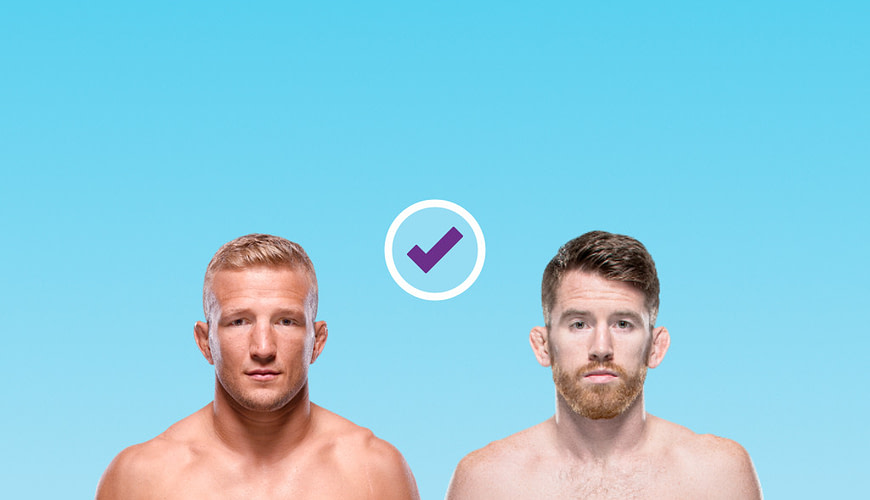 Throughout the summer, there are so many amazing UFC events ready to take place for fans to enjoy. This includes things on July 24, with another UFC Fight Night ready to draw in so many fans and supporters. In this article, we have UFC picks for Sandhager vs. Dillashaw Fight Night, which features so many primetime fights. Who will go on to be victorious inside the octagon?

Cory Sandhagen is the favorite to take down TJ Dillashaw

In the main event on July 24, Cory Sandhagen is the favorite to take down TJ Dillashaw in what figures to be an incredibly exciting matchup. These two Bantamweight brawlers will be jacked up to come away with a victory at the UFC Apex in Las Vegas, Nev. Per the Las Vegas sportsbooks, they think that Sandhagen will be the one to have his hand raised by the official at the end of the showdown.

That’s because Sandhagen will enter this particular showdown with -164 UFC odds. On the other hand for Dillashaw, he’s no doubt the underdog with his +136 odds. This tells us that Sandhagen is not only expected to win this one, but that he shouldn’t have much of an issue in defeating Dillashaw. At the same time, we wouldn’t be surprised if this one ended in the first round too.

In his last fight, Sandhagen faced Frankie Edgar in the co-main event at UFC Fight Night in early February. Sandhagen reminded folks of just how strong and dominant he can be, as he knocked out Edgar in the first round. It was a head-turning performance by Sandhagen, who made Edgar, a veteran in the game, look far inferior with them trading blows.

Dillashaw’s last fight came at UFC Fight Night 143 in Brooklyn, and he suffered a first-round TKO loss to Henry Cejudo. Now, he’ll have the tall task of trying to silence Sandhagen, but we don’t think he’ll be able to come close to getting that accomplished. Indeed, Sandhagen is our pick to come away with a head-turning victory once he meets Dillashaw.

A question countless folks will have on their minds will be can Punahele Soriano remain undefeated at UFC Fight Night? Early on in his career, the 28-year-old standout is a perfect 8-0 in his UFC fights. The fact that he hasn’t lost yet sure has made him plenty of fans among MMA circles. However, Brendan Allen will be ready to try and wipe away his perfect record when the two meet.

Allen might be three years younger at 25, but he has more UFC experience than Soriano with his 20 fights. In those battles, Allen is 16-4-0. Will he be able to take down Soriano? With this one being a co-main event, so many folks will be glued to their televisions to see who will win. Although the odds for this upcoming matchup haven’t been released yet, it should be a close one.

Originally, Soriano was getting ready to meet Anthony Hernandez, but he had to back out of that fight. Allen has stepped in, though, and he’s all prepared to do whatever is needed to hand Soriano his first loss. The last time Allen was in the octagon, he defeated Karl Roberson at UFC 261. In that win, Allen recorded a first-round submission for his victory.

The odds for the Soriano vs. Allen fight are yet to be released from Vegas. While we wait for those to come out, it’s never too early to make a pick. With that said, we’re going with Allen to win. While Soriano is undefeated and will enter this fight with plenty of swag and confidence, we think Allen will have what it takes to not only win, but bring Soriano down in the first round. Agree with us? Check out our UFC betting sites to get a wager in.

Last but not least, get ready for Chris Daukaus and Shamil Abdurakhimov to put on a brilliant performance when they face off next month. This is a heavyweight battle that folks are already talking about. Both guys’ power is something that will take your breath away, especially when they land shots on their opponents’ face or on their body. Watch out for it, folks.

With them being similar in size and reach, this has the makings to be an unforgettable meeting. While picking one over the other really isn’t easy to do – with them both having the potential to record a knockout win – we’re going to go with Daukaus to end up coming out on top. While we wouldn’t be surprised in the slightest if Abdurakhimov won, we think Daukaus will simply be too much to handle.