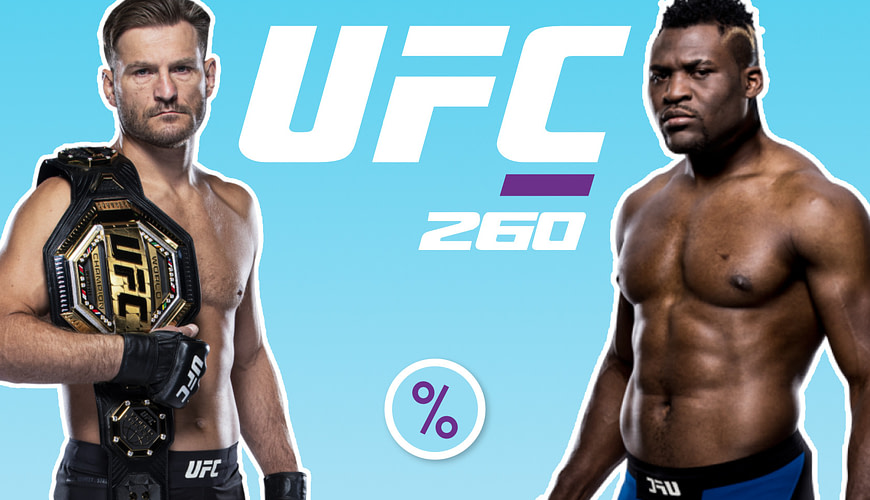 After an exciting UFC 259, it’s time to get ready for Dana White and Co. to put together another exciting event for us. Yup, we’re talking about UFC 260, which is highlighted by Stipe Miocic taking on Francis Ngannou. In this piece, we offer up our UFC 260 picks for Miocic vs. Ngannou and more. Read on!

Despite how things turned out in their first fight, Francis Ngannou is the favorite to beat Stipe Miocic in this rematch. According to the Las Vegas Sportsbooks, Ngannou has been given -155 odds, while Miocic is listed at +125. Remember, this isn’t the first time that these two have danced inside the octagon.

The two fighters first battled it out in 2018, with both each having their moments in what was a truly entertaining fight. In the end, though, Miocic’s work on the ground really impressed the judges, who gave him the victory in what was a bit of a controversial decision. As you might imagine, Ngannou wasn’t happy.

With that said, Ngannou and Miocic are incredibly fired up to meet for this rematch, with plenty at stake. Ngannou enters this one with a 15-3-0 record, while Stipe is 20-3-0. Miocic may have gotten the best of Ngannou the first time they met, but we don’t think that will be the case the second time around on March 27.

Ngannou has showcased incredible strength in his recent fights and you know he’s furious with how things went down with Miocic the first time. To say he’s going to be motivated when they fight again later this month would be a complete and total understatement. Our pick is for Ngannou, no doubt about that.

Volkanovski vs. Ortega is another fight fans will want to check out

In addition to the Ngannou vs. Stipe showdown, Volkanovski vs. Ortega is another fight fans will want to check out. Indeed, Brian Ortega and Alexander Volkanovski are ready to meet at UFC 260 and will be ready to try and pound each other’s faces in. So, who will come out on top?

As things stand, Volkanovski is the favorite between the two, as he holds -195 odds. Ortega meanwhile is the underdog with his +160 odds. With that said, just because Ortega isn’t the one with the No. 1 UFC odds, that doesn’t mean you should just immediately rule him out. We could see an upset here.

The Californian native is 15-1-0 in his career, and continues to impress each and every time he throws hands at an opponent. Now, he’ll look to keep things going when he faces Volkanovski. However, Volkanovski is also impressive and he owns a 22-1-0 record.

With all of that said, picking between the two for this featherweight title bout is tough. In this instance, we’re going to pick an upset to go down and fire in Ortega as our pick to win the fight. Yes, we know Volkanovski is the favorite, but Ortega will be ready to shock the MMA world. Let’s see if he can get things done.

Don’t forget about the other exciting matchups on the card

Yes, the two bouts above have us fired up, don’t forget about the other exciting matchups on the card. This includes the showdown between Tyron Woodley and Vicente Luque. This welterweight fight has the makings to be a back-and-forth brawl. Don’t be surprised to see them tattoo one another from the start.

In this matchup, Luque is a heavy favorite, as he’s been given -350 odds, while Woodley has been set at +240. In Woodley’s return to the octagon, he’s hoping to try and pull off an upset. However, we don’t anticipate that to happen, which is why we’re going to pick Luque to win and do so with plenty of confidence.

On top of that brawl, we’re also intrigued for when Sean O’Malley and Thomas Almeida meet up. As you might have been able to guess, O’Malley is also a big favorite, with the Vegas sportsbooks giving him -250 odds. Almeida has been listed at +210.

While fans would love to see Almeida try and take down O’Malley, we don’t see that happening either. O’Malley has showcased how dominant he can be throughout his career and that should be the case once again when UFC 260 rolls around. O’Malley is the pick to be made.