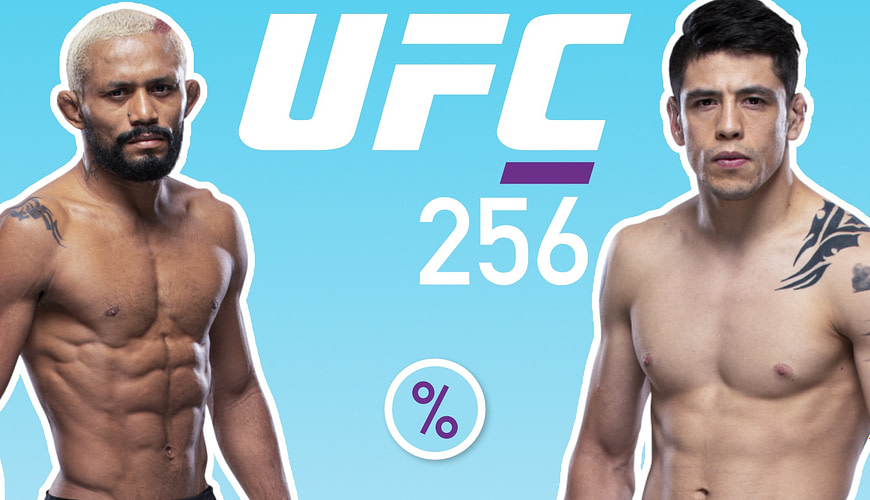 In the near future, mixed martial arts fans everywhere are ready for another big-time event to come. Yup, we’re talking about UFC 256, which will feature a great lineup of exciting matches for everyone across the world to watch. With things right around the corner, our team here at Vegas Betting has you set with our UFC 256 preview and picks for December 12. Which fighters should you bet on and which wagers should you steer clear from? We’ve got those answers below.

The headline of UFC 256 is no question the bout for the UFC Flyweight Championship. Indeed, Deiveson Figueiredo and Brandon Moreno are all ready to battle it out. The question remains, who will come out on top? For Figueiredo, the fact that he’s fighting in itself is quite a surprise.

The flyweight powerhouse just fought about two weeks ago in UFC 255, taking down Alex Perez via submission in the first round of their bout. Now, fast forward to Dec. 12, and Figueriedo will put the gloves on once again, this time looking to outlast Moreno. Figueriedo is 20-1-0 in his career, while Moreno is 18-5-1.

Entering this anticipated matchup, Figueriedo is considered the heavy favorite, as he holds -290 odds. Moreno is the underdog with his +225 odds. Some might think an upset could be on the way, but we don’t think that’s the case here. Figueriedo was sensational in his recent win over Perez, and we think he’ll be too much for Moreno to handle on Dec. 12. The pick is an easy one: Figueriedo.

Prop bets for the Figueriedo vs. Moreno fight

When you’re getting all set to make your wagers through Vegas sportsbooks for the Flyweight Championship battle, keep in mind that there’s also going to be plenty of prop bets for the Figueriedo vs. Moreno fight. This is what will make the matchup even more interesting for all of you bettors out there.

While the Las Vegas odds for those prop bets are yet to be updated, two that immediately jump out to us are the length of the fight and how the winner will come out on top, with either a TKO or submission being what fans typically like to lay their money on.

Starting with the rounds, no disrespect to Moreno, but our expectation is that Figueiredo will be able to get this one done in the first round. That’s how great of a fighter he is. He was able to defeat Alex Perez via a first-round submission. Why not do the same against Moreno? While it’s easier said than done, don’t be surprised if and when it happens.

So, will Figueiredo win by TKO, submission, or by decision? Because of his abilities on the ground, we’re going to go with another victory by submission in this case. Moreno’s athleticism will make that task incredibly difficult on Dec. 12, but our pick is a submission, with the power move coming in the first round.

Moving to the big boys for UFC 256, Junior Dos Santos and Ciryl Gane are ready for a heavyweight fight on Dec. 12. Dos Santos, a veteran in the MMA world, will enter this intriguing fight with a 21-8-0 record, while Ciryl Gane is a perfect 6-0 to start his UFC career. So, which fighter will end up being victorious?

Entering the bout, Gane is a massive favorite with his -380 odds. Dos Santos will enter the octagon holding +290 odds. As you can see, the oddsmakers in Vegas have very little belief that the former Brazilian heavyweight champion will be able to take down Gane in this one.

We agree with those oddsmakers. While you’d see an incredible payout if you pick Dos Santos to win, the chances of that happening aren’t likely at all. The safe bet would be to go with Gane. However, we don’t think this fight will end in a quick manner, with Dos Santos making things tough for Gane.

Because of this, while we’re picking Gane to win, we don’t think things will end in the first round. Dos Santos has too much experience to make any poor mental mistakes early on. We think the two will go toe-to-toe in the first round, but then Gane will showcase his dominance after that and win by TKO in the second round.

Tony Ferguson and Charles Oliveira headline the other UFC 256 fights

While the battles mentioned above will be amazing, don’t forget about the rest of the card. It’s loaded, and Tony Ferguson and Charles Oliveira headline the other UFC 256 fights that are ready to be taken place. This showdown between the two should be amazing, with Ferguson entering as the favorite.

Oliveira might be the underdog, but he’ll be ready to try and stun the world. So, will he get that job done? It’s tough to say, but anything can happen at UFC 256. Ferguson enters the fight with plenty of confidence, but so does Oliveira.

Call us crazy, but we’re going with the upset to happen: we’re picking Oliveira to win in the second round via a surprise TKO. Tune in to UFC 256 on Dec. 12 to see if it happens!