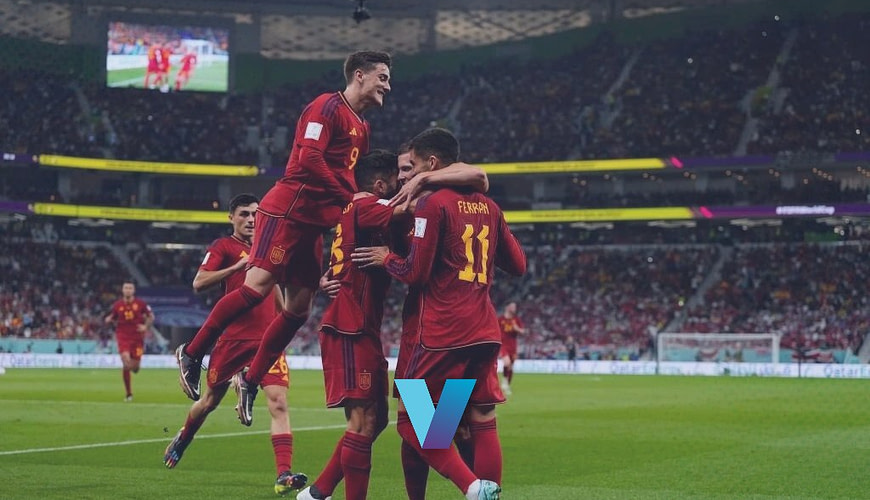 Yes, Bovada is one of many Soccer World Cup online betting sites, as the 2022 World Cup from Qatar continues this weekend. They helped us score some nice results with the MLS odds during the season. So at VegasBetting, we dig deeper and see what numbers they provide for the next World Cup matches. This article reveals our World Cup 2022 picks for match number two between Spain and Germany.

The World Cup delivered an absolute beating as Spain hammered Costa Rice 7-0 in their opening Group E match. Spain was a huge favorite in the World Cup 2022 Picks on Wednesday, and they delivered emphatically. Spain demolished Costa Rica in every way imaginable. The Costa Ricans attempted zero shots on goal, while the Spaniards fired 17. Eight went in the net, and seven crossed the goal line.

Spain came in with a FIFA World Ranking of 7th. Now, Costa Rica was down at 31st but figured to be a scrappy bunch. However, Spain scored three goals during the first third of the contest. Honestly, this game felt over once the Spaniards scored in the 11th minute. Costa Rice kept getting in their way while Spain controlled the ball and dictated the tempo.

Now, what happened here? Costa Rica mounted nothing offensively. Unfortunately for the Costa Ricans, it only gets worse from here as they play Japan and Germany. Their ticket looks to be punched already. Spain could have feasibly scored eight or nine times. The game tilted so much to the Costa Rica defensive end that Spain’s goalie could have rented a beach chair.

Six players scored from Spain as the Spaniards did not even allow a single corner kick. We did not show the number of crosses and scoring chances to protect the innocent. This puts Spain in a nice position to accumulate more points. Now, World Cup 2022 picks answer the following question. Can Spain do this to Germany too?

Germany started well against Japan. They scored on a penalty kick to make it 1-0. Unfortunately, Germany believed it made the score 2-0 but went offside. Then, the script flipped to Deja Vu for the Germans. First, Germany lost the lead in the 75th minute and then the game in the 83rd. This was despite 26 shot attempts and nine on target. Germany held a nice 3-to-1 edge in possession. That mattered little.

World Cup 2022 picks hinted that this could happen, especially after the Argentina result. Japan saw what occurred, and as the second half grew longer, the result for Germany became more precarious. Give the Japanese credit for sticking with their counterattacks. Those paid off in a big way when Ritsu Doan and Takuya Asana tallied a mere eight minutes apart. With that, Japan got the important three points needed.

This second match sets up a challenge for Germany. Some pundits believe the Germans have a chance to draw on Sunday afternoon or even win. The Germans fell to 11th in the World Rankings for a reason. They finished last in Russia four years ago. While that is not likely this time, their chances to advance took a huge hit. Spain will not do them any favors.

The Germans need a draw in the worst way for the 2022 World Cup Picks. Watch this match live Sunday, November 27th, via FS1 or Telemundo en Espanol. The game starts at 10:00 at night in Al Bayt. The expectation is that the Germans must better control the counterattacks, or the same results will happen again. Anything worse than a draw is fatal.

GermanyTo draw versus Spain on Sunday

World Cup 2022 Picks for Spain vs Germany serve up some prime bets. Germany may try to pack the game in at times defensively and try to counter. However, the midfielders and forwards for the Germans do not have the speed and precision that Spain possesses. Gundogan can create some matchup problems, but the young and old mix of the Germans still seems out of sync.

Spain understands it cannot take its foot off the offensive pedal. Germany is still lethal enough to make teams pay that try to coast. Fortunately for Spain, they are difficult to stop when they are in their rhythm. See 2010 when they won the World Cup.

Again, the numbers seem hopeful for Germany. Germany stands a 34% chance for a win while 40% has gone to the Spain side. With expected moneyline movement, the spread and other options may be worth bets for this Sunday afternoon contest.

For the World Cup 2022 picks, a value bet must be placed on Spain winning by one goal or more at +140. Also, Spain at +195 to win the first half is a wager that may not last. Given what we saw early from two squads on Wednesday, Spain looks poised for victory.

SpainTo beat Germany by one or more goals

How About More Picks?

So, how about more World Cup 2022 picks? BetOnline online sportsbook expects that Germany may not recover from their early loss fully.

Therefore, Spain and Germany may get into a bit of a fast-paced contest on Sunday. Germany needs the win and cannot sit back. Spain often attacks while possessing the ball and then striking with precision. The over at 3.5 goals is at +178. It’s worth a tiny wager.

A few more betting site online bonuses this weekend as time is on the bettors’ side!