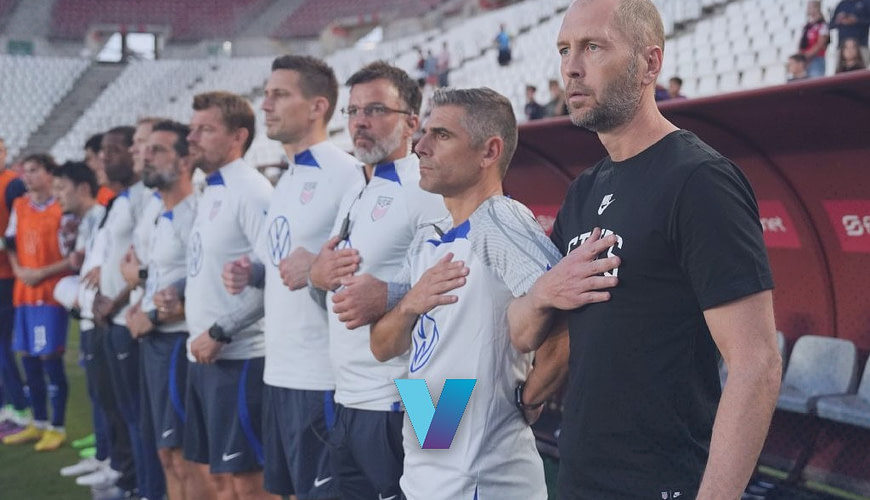 Yes, Bovada continues as one of our best online soccer World Cup betting sites as we continue the 2022 World Cup from Qatar. They were a staple for the group stage matches. So at VegasBetting, it made sense to use Bovada and see what numbers they provide for the Round Of 16 World Cup matches. This article reveals our World Cup 2022 picks for the clash between the Netherlands and the USA.

Netherlands And The USA In The World Cup 2022 Picks

The competition for a quarterfinal spot will be fiery. The Netherlands and the USA battle over in Khalifa International Stadium. As far as draws go, the Americans found a way to advance to the knockout stage despite two early draws that could have been won. The third game saw the Americans hold on for dear life after an early goal. The USA now faces a more difficult opponent, the Netherlands, in the World Cup 2022 picks.

The Americans came in with a FIFA World Ranking of 16th. Now, the Netherlands comes in a bit higher up the ladder at 8th. This USA team brings a 1-0-2 mark into the knockout stage. The good news is that the Americans may just have Christian Pulisic back for Saturday’s match. Now, what condition is the talented forward in? Unfortunately, that answer offers more questions. It’s a nice way of saying few truly know.

So, the USA needs Pulisic to have a chance of winning on Saturday, right? That seems reasonable to assume. Wrong! It remains funny from the start of the group projections that, at VegasBetting, we believed the USA has a good deal of depth. People forget they nearly made it 2-0 later in half (called offsides). Sure enough, Netherlands vs USA boils down to nerves and whether the Americans can keep theirs composed.

Next, World Cup 2022 picks answer the big question. Can the Americans win a game on Saturday against the Netherlands?

The Netherlands hold some leverage but vulnerability for Saturday. They possess the extra composure needed to advance further in the World Cup. This guarantees nothing, but it does not hurt. A Dutch team went 2-0-1 in Group A and won their group. They scored five goals and only yielded one. The Netherlands honestly coasted against Ecuador in their draw. Any let-up could be a problem.

World Cup 2022 picks hit the under with the USA match and the final Netherland match. However, could this Round Of 16 matchup do the same? Cody Gakpo remains the player that the Americans should fear. He scored in each game and had several quality chances to boot. Louis Van Gaal possesses an embarrassment of riches, including world-best center-back Virgil van Dijk. Freddie de Jong excels as a playmaker for the Dutch.

This match suits less ideal for the USA than the Netherlands. Some pundits counter that the Netherlands holds all the leverage, which is not true either. Here is the thing. For all the depth the Netherlands possesses, their interior defense can be just as vulnerable as Walker Zimmerman and Team USA’s defenders.

The Dutch pray they can score early in the 2022 World Cup Picks. Watch this match on Saturday, December 3rd, via FOX or Telemundo en Espanol. The game starts at night (just after 6:00) in Al Rayyan. The expectation is that the best the Americans can hope for is that draw. Will their defensive formation hold up, or will the Dutch break through? Finally, there exists a 28% chance of the game being decided in penalty kicks.

2022 World Cup Picks for the Netherlands vs USA match feature extra bets. What we at VegasBetting, lucked out on was the overwhelming number of scoreless draws combined with transitional two-goal spreads. What do we mean? It seemed once a team scored, another goal often followed. This happened so many times. Poetically, one of the only nations that never got that second goal was the USA. Sometimes, fates work in mysterious ways.

As crazy as it sounds, the Americans survived once, which was enough. Even the USA possesses a slight opportunity to advance to the quarterfinal. This involves scoring more than one goal, but that is possible. After all, the Dutch play their third-string goaltender and worse. Yes, the three goaltenders in Qatar accumulated a total of 11 CAPS before the World Cup. The possibilities are there if the USA gets to the final third with decisiveness.

With the Americans, the keys are Yunus Musah, Tim Weah, and Christian Pulisic. Both bring instrumental intangibles, but these two players must step up even more. The Americans must play with controlled aggression. If they do, team USA will advance. It is that simple. If they get nervous, the Americans are as good as being eliminated.

For the World Cup 2022 picks, a value bet must be placed on the Americans winning by one or more goals. A 2-1 result is possible.

Team USATo win by one or more goals

There Is Always More!

There is always more. According to BetOnline online sportsbook, Americans are less of a liability in betting. What if things snowball on the Americans or Dutch? Is there a hedge bet on the total going over?

Once more, with the slight chance (22%) of an American victory, a chance of seeing three or more goals combined is plausible.

Netherlands and USATo score three goals or more on Saturday