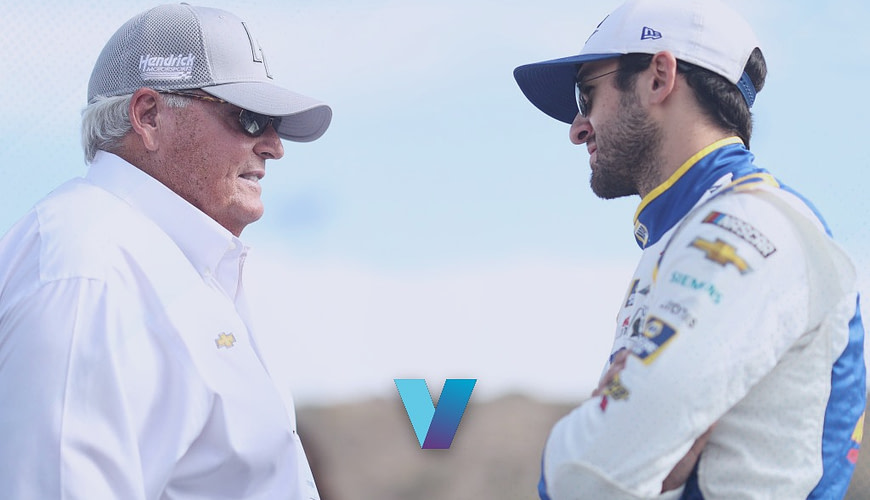 As Road America leaves us in the rearview, the NASCAR season is already through 18 races. With the first half of the season behind us, now we can get start getting serious about potential contenders and some value picks too.

NASCAR Futures Keep Opening As The Second Half Looms

Once more, we present the top 16 drivers listed below in our NASCAR online betting odds for the 2022 Championship. This reveals some intriguing NASCAR Futures Halftime bets. It would appear that the youth still served and may keep serving.

Kyle Larson is a co-favorite after the NASCAR futures halftime bets. Larson still has not meteorically risen up the standings just yet. While he has moved from 9th to 4th, the No. 5 car remains 71 points behind current leader, Chase Elliott. With the Toyota’s and two of his teammates behind him lurking, Larson still has ground to make up if he wants to repeat as champion.

In his first nine races, he had just one win, but four top-five finishes. The only troubling part maybe those three DNFs. Yes, Larson had some odd luck last year too. This year has not been easy. The good news is that the Hendrick Motorsports Racing driver had just one DNF in the next nine races. That comes with five top-five results but no wins along the way.

Also, the Next-Gen car has been an exercise in frustration for Larson and his crew. It does not help that his crew chief was suspended for four races for the dreaded bouncing tire. That seems to be a theme this year with NASCAR. That being said, defending one’s title just has proven not to be so easy. Remember, Chase Elliott learned that lesson last season as he struggled at times early on.

The big thing at VegasBetting, we suggest is to take the first half races as a body of work. There are definitely some interesting trends in speed, the Next-Gen car, and drivers being able to drive. Yes, there have been an elevated number of cautions which has limited some long-term runs in the first couple of months. Again, Kyle Larson is still a favorite to repeat as NASCAR Cup Series Champion. Note, that his value has inched up slightly.

It is great news that Chase Elliott is an intriguing shot once more. The driver won the NASCAR championship two years ago and still leads the drivers in points at the halfway point. He leads Ryan Blaney by 33 points in the standings. Ross Chastain, from TrackHouse Racing, is 35 points back in third. Elliott won twice in the last nine-race segment and almost won on Sunday. He narrowly missed out on a third win in 18 starts.

So, the No. 9 car has been producing points amazingly well in 2022. He has 12 top-ten results after 18 races. Furthermore, Elliott has just six top-five’s and one DNF. Last year, Elliott never fully recovered after a bad start and was almost battling uphill.

Again, Elliott is one of those drivers who gets it going as the season moves along. Last year, the Hendrick Motorsports Racing driver finished fourth overall. This season, the No. 9 keeps putting himself in a position to win. He may have faltered late on Sunday but again, Elliott keeps accumulating points.

With all that said, the NASCAR Futures Halftime Bets says Chase Elliott has a great shot. His numbers have shortened from April.

Again, Ross Chastain has stayed in position during the NASCAR futures halftime bets. The Trackhouse Racing driver is still in the top five in points and a mere 35 points from leader, Chase Elliott. Unfortunately for Chastain, he has three DNFs. So despite his 12 top-ten’s, nine top fives, and two wins, he is still just in third place.

Lots of things can change over the second half.

Drivers like Tyler Reddick and Chase Briscoe are now both in the playoffs. Briscoe has a win from earlier in the season and Reddick won at Road America on Sunday to move him up to 13th in the standings. Quite a few fellow drivers expect Reddick to move up the standings further with just eight races until “The Chase” starts. His +2800 number is better than that of +2100 at the nine-race mark.

Ryan Blaney carries a lot of Team Penske hopes that he can win his first title this year. He is second in the points and keeps coming close to winning a race. There are so many young drivers and Blaney also has shown he is improving over each second half of the past few seasons. Again, the No. 12 Ford has great speed, five stage wins, nine top-tens, and nearly a half dozen close calls. Blaney’s number has been shortened to +900 for potential.

Who Else Could Contend Now?

Can anyone else contend now? With William Byron and Alex Bowman able to win any week, that changes things. Also, do not sleep on Kyle Busch who could get hot at the right time. He is the one Toyota driver other than maybe Martin Truex Jr. that has a shot among the old guard. Right now, it is a young guns game as Elliott, Larson, Blaney, and Chastain rule the roost.

Our Bet After This NASCAR Future Halftime Bets…

Take Chase Elliott to win the 2022 NASCAR championship with Tyler Reddick as our new long shot.

Check out the best Vegas online betting sites, like MyBookie, where you can wager on this NASCAR future along with baseball, golf, and much more this July.