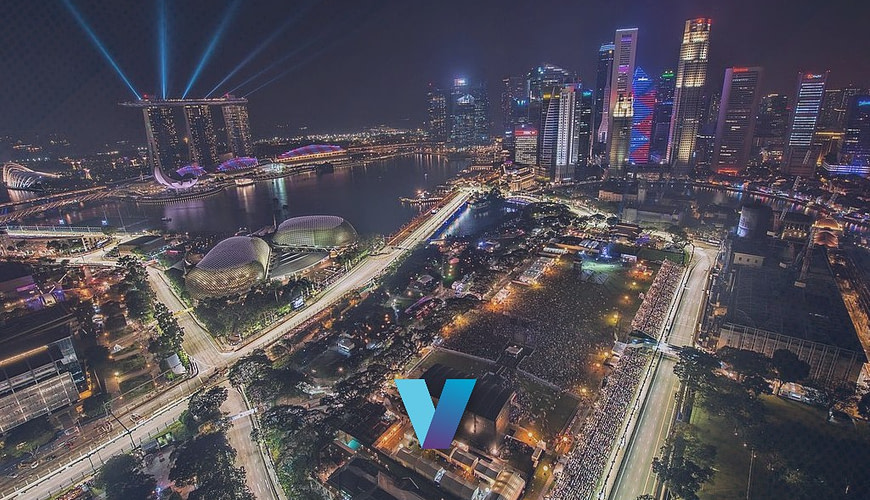 After a three-week break, Formula 1 is back this weekend, with Round 17 taking place in Singapore. Here we look at the race in more detail, bringing you all the information you need and also naming our free Formula 1 betting picks for the race.

Only five races are left in the 2022 season after this weekend’s race. And with a lead of 117 points over his nearest rivals, it is possible that Max Verstappen could be crowned 2022 World Champion this weekend. Can he do it? He needs a lot to go in his favor, but it is possible.

To be crowned world champion for the second time this Sunday, Verstappen needs to outscore closest rival Charles Leclerc by 22 points, teammate Sergio Perez by 13 points, and George Russell by six points.

There is no debate here, though. For Verstappen not to win the world title this season, he will have to – basically – get injured. If he can get round the circuit and finish in the points in his next two races, that should be enough to confirm the title – with plenty of races to spare.

But with five wins from his last five races, you wouldn’t bet against Verstappen getting the job done this weekend.

2022 Singapore Grand Prix; All you need to know

This is the first time this race has been held since 2019. Back then it was won by Sebastian Vettel, with Charles Leclerc claiming pole.

The race is held at the Marina Bay Street Circuit and, as a night race, is one of the most spectacular F1 events of the season. The drivers will compete for over 61 laps of the floodlit street circuit, covering just over 191 miles.

The Marina Bay circuit has 23 turns and takes in some of Singapore’s most famous landmarks. It’s also one of the slowest circuits on the F1 roster, with drivers facing a bumpy circuit and differing driving conditions with the race occurring at night.

There is now no betting available on the driver’s championship as Max Verstappen just has to be capable of walking to his car to win the title. In betting to win the championship without Verstappen, the best Formula 1 betting sites make Charles Leclerc the favorite at -334.

Who is the favorite to win the 2022 Singapore Grand Prix?

The odds on Max Verstappen to win are getting silly now. This weekend the Dutch world champion is -250 with the best Las Vegas odds makers to make it six wins in a row. His closest betting rivals are Charles Leclerc (+400), Carlos Sainz (+1100), and Lewis Hamilton (+1200). Also given an outside chance are George Russell and Sergio Perez, both +1600.

If Perez finds himself leading with Verstappen in second, as Red Bull teammates, Perez would no doubt be ordered to slow down and let Verstappen pass. This might be why the Mexican driver has longer odds than the rest of his rivals.

More information about Bovada, one of the sportsbooks we use for our odds, can be found on our Bovada.lv sportsbook review for 2022.

To further elaborate on the mathematics, for Verstappen to be crowned world champion this weekend, he first and foremost must win the race. Everything else comes into play after that. No win on Sunday, and the title has to wait another week.

So, will he win it? Well, the Singapore circuit wouldn’t be the one Red Bull would choose if they had their choice of circuits to race on. The road circuit at Marina Bay has very few straights and many corners (23). And this isn’t Red Bull’s main strength.

The course is far more suited to Ferrari than Red Bull. But given Ferrari’s appalling form of late, how can they be trusted to win any race at the moment?

But this doesn’t mean they aren’t the best value bet, and with Leclerc finding pole position in the last race in Italy, might the value lie elsewhere?

Taking all of that into consideration, I’ve decided my first pick this weekend is for Charles Leclerc to be on Pole Position for the Singapore Grand Prix. He is +175 with the Bovada.

Charles Leclerc to be on Pole Position2022 Singapore Grand Prix

Can Ferrari get it right?

As much as their form concerns me, I must consider the odds. Max Verstappen is -250 to win the race and is of no value.

Charles Leclerc is +400 and Carlos Sainz is +1100, both Ferrari drivers. Ferrari will never have a better chance to stop the rot than in Singapore. So I will stick my neck out and back a Ferrari to win the race at odds of +350.

I do say that all F1 picks should come with a health warning, though. There is more than a good chance that Verstappen will win again. So be very cautious with your wagers if you are following these picks.