Every week, there’s some new update on an exciting new casino, sportsbook, or restaurant opening up in Sin City. This time, it’s a big name set to open its third location in the city. That’s right, and it has been revealed that Guy Fieri is set to open a Las Vegas sports restaurant this summer and people can’t stop talking about it.

Fieri is a popular name, and his restaurants are incredibly popular across the globe. He already has two locations open in Vegas, and he’s ready to bring home No. 3 this summer, with an official launch date set to be announced shortly. Fieri’s latest project will have a sports focus, as the name is Guy Fieri’s Flavortown Sports Kitchen.

With that focus, it will attract loads of sports fans to the restaurant, as there will be a lot of television for people to watch all the action they could even think of. So, not only will people be able to eat some delicious food, but they’ll also be able to check the best-rated sportsbooks, including the reliable Bovada review, for top odds before they make their wagers. Eating will be the cherry on top.

The capacity for the bar will be just under 280, meaning this place is going to have ample space for people to have a great time. With the summer opening, that means that people are surely going to be checking out the MLB betting odds when they’re in Vegas, and now this new Fieri restaurant will give them yet another reason to visit Nevada, which is a win-win for everyone.

What adds to the intrigue here is that Guy Fieri’s new spot will be open at the Horseshoe Las Vegas, only making things more interesting for the casino and resort. Fieri surely knows what he’s doing here, as he understands the importance of bringing his new restaurant to a widely-known area in Las Vegas. The Horseshoe is ready to open the doors, and Fieri is excited too.

“Like I always say, ‘Go Big or Go Home,’ and that’s exactly what we’re doin’ now by bringing Flavortown Sports Kitchen to Vegas, the baby!” Fieri said in a statement. “Between my days as a UNLV Runnin’ Rebel, my flagship Guy’s Vegas at The LINQ, and El Burro Borracho, Las Vegas is my second home. It’s about time we plant the Flavortown flag at the Horseshoe to create the best place to eat, drink, watch sports and bet in the city.”

As you can see from that tweet, Fieri couldn’t be happier about this opening, and he should be. Around the year, people will love visiting this place, especially during the football campaign. People in Las Vegas love visiting the city in the fall, as they can check the NFL betting odds and then get their best bets in. This is what makes the city so great.

For Fieri, his new restaurant isn’t going to be a popular betting destination, but people at the Horseshoe Casino will be able to visit their sportsbook there and then make their bets. It’s a win-win for everyone involved, especially Fieri. As soon as Opening Day arrives for the restaurant, then the hype for Fieri is only going to keep on growing. This is a great project for him, no doubt.

How many other restaurants does Guy Fieri have in Las Vegas?

A lot of people often find themselves wondering how many other restaurants does Guy Fieri have in Las Vegas? This new opening, it will bring Fieri’s third Las Vegas restaurant, as The LINQ and El Burro Borracho are quite fun attractions for people to check out. The main difference here, though, is that Fieri’s new project will indeed have that sports focus.

Fieri is one of the most popular food geniuses out there; no one can question that. His name in Las Vegas goes a long way. As a matter of fact, his name is well known across the United States and the world as well. This is why so many people, especially investors, have no doubts in their minds that Fieri’s new venture is going to be a complete and total hit, especially with the Horseshoe Casino being so much fun to visit.

Whenever a new restaurant opens up, there’s always worry that things may not go as planned. However, as has been the case with Fieri in the past, he knows how to bring people to a place, and he knows how to pack seats. This is why the new sports kitchen should take off from the moment things are good to go. Fieri has been on fire in the restaurant world, and that won’t change this summer. The sports kitchen should be a total hit. 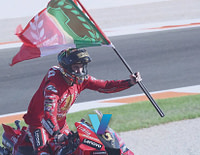