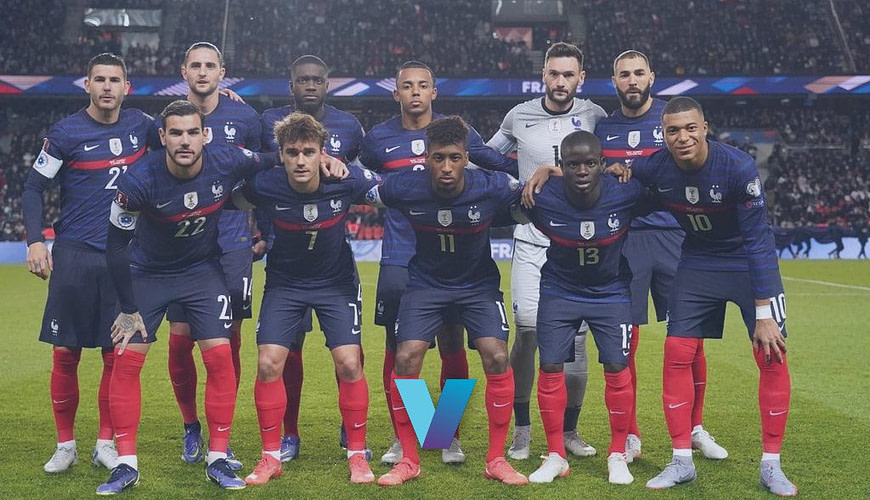 Bovada is one of the vital Soccer World Cup betting sites as we dig into the second matches of the 2022 World Cup from Qatar. They were some speedy 2022 MLS Online Odds this season. So at VegasBetting, Bovada is one of the main sites seen for the group stage World Cup matches. This article reveals our World Cup 2022 picks for match two in Group D between France and Denmark.

France And Group D In The World Cup 2022 Picks

France often seemed to be asleep during their Tuesday opening match against Australia. The men from down under went up 1-0 early. Then, the French got mad and scored four straight unanswered goals. While several wagers won, the feeling was what happened early. That said, France expects to be a World Cup 2022 Picks possibility for the second match versus Denmark.

The French came in with a FIFA World Ranking of 4th. They are the highest seed in their group. However, Denmark is the tenth. Still, the gap between the fourth and tenth is significant. Now, Tunisia (30th) will not scare France. The question for the French remains do they want to go for nine points and a perfect 3-0 mark in group play? Honestly, it is up to the French attack on Saturday.

So, the only real blemish on the opener was the non-contact injury to Lucas Hernandez. Thankfully, two goals by Olivier Giroux and a header scored by Mbappe helped France win and gain a +3 goal differential. This gave the French a huge leg up in the group, especially after Denmark and Tunisia played to a scoreless draw.

Now, World Cup 2022 picks pose an interesting question. Does France even have to beat Denmark to win Group D?

Some assume that France and group advancement are a forgone conclusion. One never knows, but France is now -700 to win the group and -8000 to advance. That sums up their chances. So, let’s dig into a little more on the French. After all, what are France’s chances of going for nine points in the group stage? What will France do against Denmark on Saturday?

World Cup 2022 picks allow us some leeway to get a little more creative. After all, picking the match is not always enough for bettors. France is less of a favorite against Denmark but their range is between -115 and -120 currently to win on the moneyline.

This setup gives France more options and wagerers too. Some pundits argue that France may let off the gas pedal a little against Denmark. However, France showed against Australia that their depth was underestimated. Even better news for the French was the play of Olivier Giroud. Giroud was aggressive and looked motivated to score goals. Maybe, he or Mbappe have a shot at the golden boot.

The French winning their second match would help with 2022 World Cup Picks. Watch this tilt on Saturday, November 26th, via FS1 or Telemundo en Espanol. The game starts at night (just after 7:00) in Doha. The expectation is that France will get out of the group and have the potential to beat the spread again over the weekend. Winning by at least one goal would not be a surprise given France’s motivation versus the Danes.

FranceTo win by one or more goals over Denmark on Saturday

2022 World Cup Picks for the France vs Denmark match features more potential ways to bet. Soccer possesses plenty of methods to wager money on all sorts of props, outcomes, etc. Will France win and produce a clean sheet? Arguably, the French would have had a shutout if not for that unfortunate injury to Hernandez. After that, no one scored on the defending World Cup champions from 2018.

Surprisingly, France is producing a clean sheet, and winning is still at +190. Even the French and more than 1.5 goals being scored stand at +135. Again, there are some shots to take as France wants to seal this group up as quickly as possible. A better effort is expected by Denmark. The Danes have a ton of pride, and we have a hedge bet on them below.

With the French, the key is simply momentum. Once they scored, the game was over. Though France sometimes fell asleep, they turned on the jets when needed. Possession was 63-37 in terms of percentages. Shots on goal were 7-1 for the French (23-4 attempted shots). Again, that will wind up closer to level on Saturday but expect France to get more of the attack than Denmark.

For the World Cup 2022 picks, a value bet can be placed on France to get an anytime goal from Olivier Giroud again at +185. That is too much plus money to overlook this weekend.

In the World Cup 2022 picks, do you remember those crazy hedge bets? This could be a lot of fun when figuring out the pace and room for some surprises.

Once more, keeping a draw in mind, there is that +255 number on Bovada. That is a significant one. If anyone believes Denmark can spring an upset, BetOnline does have the Danes at +380 to win outright.

France and DenmarkTo draw on Saturday

Do Not Forget Those Other Matches Saturday

Do not forget those other matches on Saturday. As always, there are many betting site online Vegas bonuses to help one’s World Cup budget. Good luck this weekend!