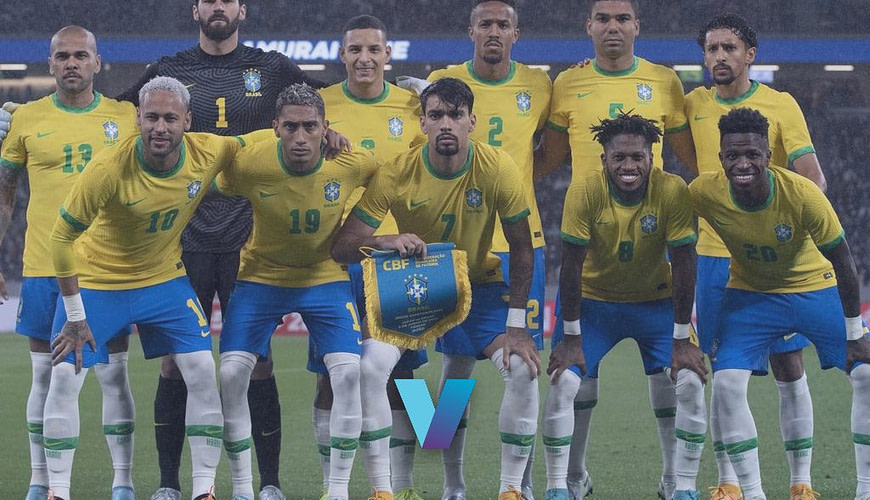 Bovada online sportsbook was one of many Soccer World Cup Vegas betting sites as we approach the 2022 World Cup from Qatar. So at VegasBetting, it made sense to delve deeper into the site to see what they provide for the opening World Cup matches. This article reveals our World Cup 2022 picks for the match between Brazil and Serbia.

Brazil is a polarizing force in the World Cup 2022 picks, and for a good reason. When looking at win probabilities for the first matches, the team from South America has a whopping 68% chance of winning. There are many good things for this starting 11 leading up to the World Cup in Qatar. Brazil scores a ton and gives up a little defensively. That was especially evident in the international friendlies.

The nation comes in with a FIFA World Ranking of 1st. Brazil was as low as third last year, but its ranking has not slipped out of the top three during the pandemic. When healthy, this South American country probably has the best chance of winning the World Cup. Furthermore, the 2018 winner (France) is not favored. The top choice leading up to the tournament is Brazil at +400.

So, many remember the unbridled joy Belgium experienced when they surprisingly knocked off Brazil in 2018. All that probably did was angered the giant. Brazil’s depth and talent were on full display this summer. They do not lose matches leading up to big tournaments. Honestly, it remains hard to believe that Brazil has not won the World Cup since 2002.

Now, World Cup 2022 picks answer the next question. Can Brazil not only win on Thursday but also cover the spread against Serbia?

Goals May Be More Plentiful Thursday

Some do not understand how hard it is to score on the world stage. However, goals may be more plentiful on Thursday in Qatar. That is the prevailing thought here. In the summer, Brazil scored a whopping 18 goals in their last five matches. Serbia is not slouching themselves as they put 13 soccer balls in the back of the net. A combined 31 goals come out to a combined average of over six!

Possession was attractive in these matches. Despite this, Brazil can strike anytime, as we saw in the 2018 World Cup when these two teams faced off. The 2-0 final score was deceiving. It could have easily been 4-0 or even 5-0. World Cup 2022 picks give a considerable amount to think about. Can Serbia muster any offense against Brazil or will this be a one-sided rout again?

This setup benefits a country like Brazil greatly. Some experts illustrate that Brazil is almost too familiar with a team like Serbia (FIFA World Ranking 21st). The Eastern European team can slug it out, but they lack the depth and strikers to scare Brazil much. Brazil’s starting 11 with Alisson in the net and Neymar in the midfield is nearly unfair. Then, Jesus and Richarlison are quite a duo that can be interchanged at striker.

Brazil desires to make a statement regarding 2022 World Cup Picks. Watch the subtle possession play and 1-2’s in this game on Thursday, November 24th. The game starts at night (just after 10:00) in Lusail. The expectation is that Brazil is way more accustomed to this environment. They will take it to Serbia right away and likely score early then potentially keep on scoring. Brazil to win by two or more goals is still plus money.

BrazilTo win over Serbia by two or more goals

2022 World Cup Picks for Brazil’s opening match versus Serbia expect to be ripe for more bets. Remember, soccer presents a lot of different spreads, futures, and micro bets. What do we mean by micro bets? These are the smaller wagers that one has to scroll way down for. People in the United States may be somewhat new to these, but with more ways to make money, these are methods to garner more profit instead of just betting Brazil at -235.

Not surprisingly, the parallels between 2002 and 2022 are genuine. On the other hand, this still feels like the World Cup is more up for grabs than anyone thinks. Brazil and Argentina are not a foregone conclusion to even meet. That Neymar vs Messi battle may not even materialize. Again, Brazil possesses more depth, offense, and ability to defend. There is a reason why they are ranked first. Brazil putting it all together is the unknown.

With Serbia apt to give up more goals this time, Brazil’s team over at 2.5 is set at +173. It is not a stretch to see the Brazilians score three or more times on Thursday afternoon. Even the first half over for 1.5 goals comes in at +170. There are so many choices.

One More Bet For The Road!

Hey, we have one more bet for the road in this World Cup 2022 picks. Technically, we have two. Brazil to have a shutout win is dangling at +125, while Brazil leading wire-to-wire is Even. Take both!

The contention is to keep looking at different angles during the group stages to take advantage of mismatches.

BrazilTo win by shutout on Thursday

These are the best sports betting site bonuses to help you stretch your wagering dollar.