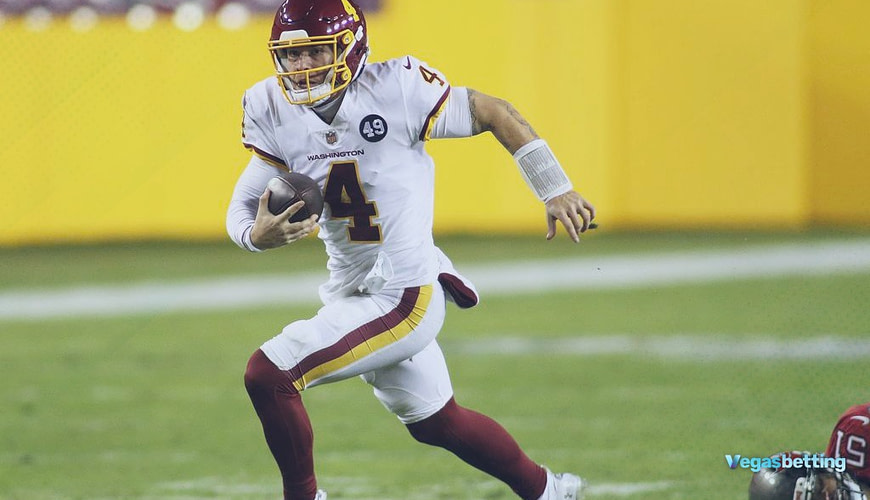 Come Monday night, the nation’s capital area will light up as the spotlight shines from FedEx Field in Landover, Maryland. That is because Seattle and Washington will clash on Monday Night Football to close out Week 12. Taylor Heinicke and the Washington Football Team will be stoked to face Russell Wilson and the Seattle Seahawks in a battle of teams under .500.

Now, the Football Team has won consecutive games to raise their record to 4-6 after losing four straight games. This article features our NFL MNF picks for Week 12’s Seattle vs Washington. Will Taylor Heinicke be able to get Washington back onto the playoff bubble?

Washington is a razor thin favorite to win this Monday night

Heading into this NFC Week 12 finale, Washington is a very slight favorite to win on Monday night. Washington has a huge opportunity to raise their record to 5-6 and get on what is a very crowded playoff bubble. Taylor Heinicke and particularly the Washington defense has played much better as Washington defeated NFC South leading Tampa plus Carolina, who is on the playoff bubble. Seattle is on the tail end of the picture at 3-7 and Russell Wilson is playing just to get healthy.

While Taylor Heinicke has showed flashes of brilliant play, the problem is actually Washington’s defense who gets too aggressive and can be vulnerable to big plays. The last three weeks have seen the Football Team flex its muscles and look very much like last year’s top-five ranked NFL defense. They have allowed less than 300 yards and just 57 points in that span.

Washington did just enough to win last week. Coming off a huge home win, the Football Team had to hold on for dear life versus Cam Newton and the Carolina Panthers. Give Washington credit as they at least should be ready for the same type of game this week. As for Seattle, they were beaten by Colt McCoy and the Arizona Cardinals at home last week after being blanked the week before.

Who is our MNF Week 12 NFL Moneyline Pick?

The Las Vegas online betting sites feature Washington holding -120 NFL odds to leave the field with a fifth win, while the Seahawks roll in at +100 or EVEN. With Seattle and Washington heading in seemingly opposite directions. Washington should be able to win this divisional game, which is why they are our moneyline pick (-120) to be 5-6 by the end of Monday night.

Will the over or under hit between Seattle and Washington?

A question fans are going to agonize over is will the over or under hit between Seattle and Washington? Normally, we’d go with the under here because both the Seahawks and particularly the Football Team, when they lose, can lay some colossal eggs. However, they have been pretty entertaining in the two primetime games this year. Washington can be enetertaining on prime time and even last week, they combined for 48 points versus Carolina.

The last time Washington played at home was going up against the Tampa Bay Buccaneers in Week 10. In that victory, Washington had a burst on the offensive side with 29 points. They were efficient as they found the end-zone despite just 320 yards of offense and failing to break 100 yards rushing the ball. It was more their defense, which held the vaunted Tom Brady and Tampa Bay to just 19 points and 273 yards (220 passing). Washington also forced Brady to throw a couple of interceptions.

Seattle can be quite a foe at times too because they can occasionally put up some points. They have scored 25 or more points four times in ten games. That does not sound all that impressive but injuries have impacted Seattle’s season. Russell Wilson’s finger injury, and whether he came back too soon, remains a matter very much up for debate. He has not looked the same the last two weeks and neither has Seattle’s defense.

The Seahawks being 3-7 this 2021 season is something that has surprised some people. Our prediction is that Washington will end up winning 27-24 on Monday night, which will cover the over/under of 46.5 points. The over has -110 odds, while the under also has those same odds listed. We’re hitting the over! Is this a bet that most experts and bettors agree with? Check out our NFL online betting sites and get some more dollars on this tilt.

Seattle and Washingtonto hit the over

Look for Washington to try and tire Seattle out

With Washington looking to go 5-6 on the year, expect Washington to stretch a weary Seattle defense out. Arizona even without their best two offensive threats in Kyler Murray and DeAndre Hopkins passed for over 300 yards. Let this sink in. Seattle was lucky to give up just 23 points last week and still gave up 414 yards to the Cardinals.

The Washington defense can be a bit vulnerable too. Even last week, Cam Newton, in his second stint with the Carolina Panthers, did move the ball pretty well against Washington. Carolina did score 21 points and there was a little room for more scoring. It just came down to a few mental mistakes — not turnovers. Those are mistakes that probably do not happen if Newton had been under center for Carolina the whole season.

So, the odds for Washington to score more than 21.5 points is -130. The Seahawks again gave up 23 points last week to an Arizona team that was inconsistent at best offensively. Weather should not be an issue. Expect temperatures to be mostly in the 30’s with Partly Cloudy skies. Winds will be calm near the nation’s capital which should help both passing games — particularly Washington’s. Take the Washington Football team over at 21.5.