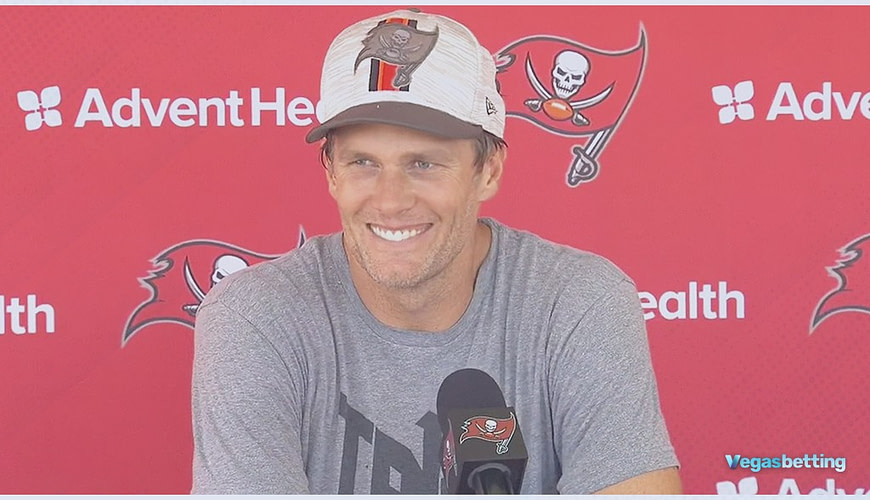 Thanksgiving week seems like a great time to look at the NFL MVP Props. Without fail, the numbers seem to always change aside from a few constants. One of them has been Tom Brady. Brady is one of the favorites in his “Age 44” season. Let that sink in for a bit. What was anyone doing at 44-years old? It is rare to see a player among the best at this stage of the game.

Will anyone be able to unseat Tom Brady? So far, Josh Allen has stumbled the past few weeks after looking like a possibility. Patrick Mahomes has struggled the past month or more. Even Aaron Rodgers was outdueled by Kirk Cousins on Sunday. Kyler Murray could be a candidate but he has been out with a shoulder injury for the past few weeks. What’s a prop to do?

The numbers compare and contrast in the NFL MVP Props

The NFL MVP Props illustrate one thing. This race is chaos. Again, Tom Brady near or at the top has been the only relative constant over the last six weeks. That’s right. Six weeks. By the way, there are still seven weeks to go in the NFL regular season.

It really does depend on the sportsbook too. Josh Allen is a great example of this because, among top Vegas sportsbooks, he ranks second or third. Outside the top sites, he ranks first or second. Again, the problem is trying to figure out who will stay healthy, who will thrive, and who may falter.

Now, what about those numbers for the top candidates in the NFL MVP Props?

Again from book to book, the MVP race is an absolute mess when it comes to trying to figure out if the favorites will even stay the favorites. Admittedly, this is a lot of fun. For as many sites like MyBookie or Bovada, there are several like BetOnline out there who have all the numbers bunched up. It is why trying to get a handle on this is no easy matter. As one can see by the numbers, there are three candidates, for now, who could win this MVP award. Let’s take a look.

The top focus for the NFL MVP Props is on Tom Brady. Why? It is simple. He puts up the best home numbers typically. Brady has 18 touchdowns in his last four home contests. The final seven weeks after the New York Giants game features three home and four road tilts. Thankfully, the MVP race is not dependent on how many weeks Brady covers the Vegas NFL betting odds. He has been able to at home but on the road, it has been a bit of an adventure.

One piece of good news is that Brady does play Atlanta, Carolina twice, Buffalo at home, and yes, the New York Jets. The Jets are a team that No. 12 lives rent-free in their heads all day and every Sunday. The final couple weeks could be a tipping point that favors the seven-time Super Bowl winner.

It is not a secret that Brady enjoys the warmer weather but he can still play in the chill when needed. The key may be how he fares in Indianapolis in Week 12. If the Tampa Bay quarterback finds a way, then his odds may shorten further. If not, there may be time to get in on the quarterback.

The Tampa Bay Buccaneers quarterback has become our favorite to win the NFL MVP.

What about Josh Allen and the MVP race?

Over in the Great Lakes region err Buffalo, Josh Allen, and the MVP race have become a bit of a sore subject the past couple of weeks. The last two games have seen Allen stumble considerably much like the first few contests of this regular season. How quickly we forget.

The Buffalo Bills quarterback rose up again, with big MVP-like performances in Kansas City and Tennessee. Allen’s problem has been the lack of prolific games. He has just 21 touchdowns and eight interceptions. His QBR of 81.4 last year is much less this year at just under 60.

With Buffalo, Allen needs to find consistency. Most believe the last two games should be good for Allen against the Atlanta Falcons and New York Jets. Will those be enough to sway voters who may have their minds made up? The NFL MVP candidate has to hope so.

So, Las Vegas online betting sites list Allen around +370 to +525. Here is the quarterback’s best number.

Then there are the rest of the NFL MVP Choices

The rest of the NFL MVP choices all have their flaws. Check out some of these generous Vegas betting site bonuses from bookmakers and go take a risk on one of these players perhaps?

The biggest wildcard remains Patrick Mahomes. Mahomes is the one outside the top three choices that could go on a run and steal the whole thing. He has plenty of primetime opposition to make a run. All of the final six games are against possible playoff teams.

After that, there is still the third choice Matt Stafford. Stafford has had some Detroit Lions flashbacks the past couple of weeks. However, the Los Angeles Rams offense is still very dangerous. He does lead the NFL quarterbacks in QBR with a 67.8. If Stafford stays near 300 yards a game and produces better than his 3 to 1 TD-to-INT ratio, he still could win the MVP award.

Matthew Stafford remains among the best value of the other MVP choices at +1000, while Aaron Rodgers and Dak Prescott among others have fallen off. He is our best long-shot pick.

Do not forget to look at these sportsbooks below.