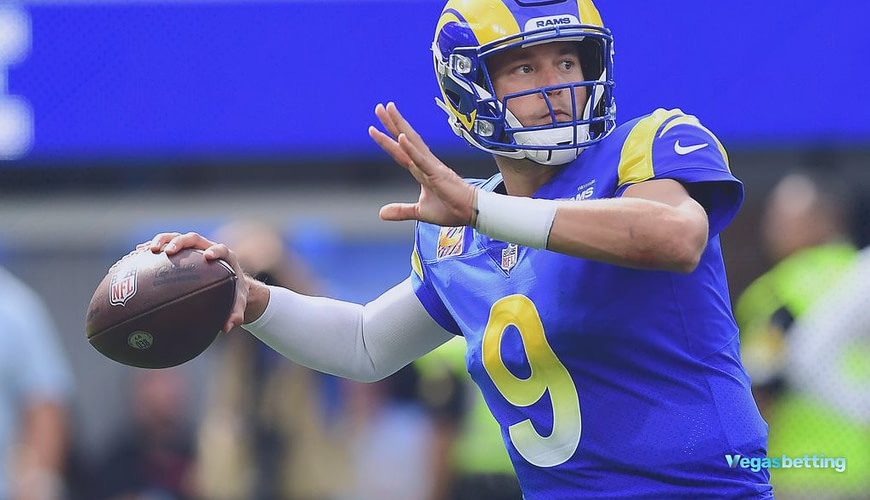 Come Monday night, the spotlight burns bright at Levi’s Stadium. San Francisco will be primed to host Los Angeles in what should be an intriguing contest. The 49ers have been a disappointment this year. Now, the Rams have won seven of their nine games even though there was that home dud last week against Tennessee. In this article, we have NFL MNF picks for Week 10 for Rams vs 49ers. Will Matthew Stafford be able to help his Rams rebound past the 49ers?

Rams are slight favorites to win on Monday night

Heading into this division battle, the Rams are slight favorites to win on Monday night. Los Angeles still has a chance in the NFC West. The San Francisco 49ers, sadly, are 4.5 games off the lead in the NFC West. San Francisco’s season is headed off the rails quickly. Meanwhile, Los Angeles, as we mentioned is 7-2 after losing at home to the Tenessee Titans by a score of 28-16.

While Matthew Stafford is a veteran and a huge upgrade over Jared Goff, the problem is occasionally Stafford gets caught going too deep down the field. In nine games, the starting quarterback is averaging over 300 yards per passing contest. He does have 23 touchdowns and six interceptions in his last three games. He has become a 33-year old quarterback who can manage the game but also air the ball out deep. The Rams quarterback has two game-winning drives on the season.

Both defenses were off last week. San Francisco allowed 31 points at home to the Arizona Cardinals who were playing without Kylar Murray. Colt McCoy and James Connor lit the 49ers up. As for the Rams, they allowed 28 points to a Tenessee Titans team who was missing Derrick Henry. They did have some interesting numbers that represent potential for Week 10.

Who is our MNF Week 10 NFL Moneyline Pick?

As for the Las Vegas online betting sites, Los Angeles holds -197 NFL odds to leave the field with a victory, while the 49ers are currently riding in at +172. Normally the home team prevails in a primetime Monday night game like this, but this is different with the Niners 0-4 at home. Los Angeles should be able to win this divisional game, which is why they are our moneyline pick to raise their win total to eight.

Will the over or under hit between the Rams and 49ers?

A question many fans are going to ponder is will the over or under hit between the Rams and 49ers? Normally, we’d go with the under here because the quarterback play from both teams last week was less than good when it came to producing points. After all, Los Angeles scored just 16 points at home while San Francisco was not much better racking up 17 points also at home.

The last time we saw the Rams on the road was going up against the Houston Texans in Week 8. In that win, Los Angeles piled on the offense with 38 points. Stafford broke the 300-yard passing barrier (305) and tossed three touchdowns. The Rams ran wild for 165 yards in that game — led by Darrell Henderson who nabbed 90 himself on just 14 carries. The week before, Los Angeles racked up 38 points in New Jersey against the New York Giants. Their offense is very dangerous — especially Cooper Kupp and the deep ball.

What makes San Francisco a threat at times too is simply they can occasionally put up some points. They have scored 28 or more points three times in eight games. That does not sound like a ringing endorsement. However, the 49ers have Deebo Samuel, Jimmy Garoppolo, and George Kittle. Even Trey Lance can provide a changeup and play either quarterback or a little wide receiver.

For the 49ers to be 3-5 this 2021 season is something that should phase anyone. We believe Los Angeles will end up recording a 30-24 win on Monday night, which would cover the over/under of 49 points. The over has -110 odds, while the under also has those same odds listed. We’re picking the over! Is this a bet that everyone agrees with? Check out our best NFL online betting sites and place some wagers on the action.

Rams and 49ersto hit the over

Look for the Rams to throw deep on Niners secondary

With Los Angeles attempting to go 8-2 on the year, expect the Rams to go deep on the Niners’ secondary. Matthew Stafford throws one of the most gorgeous deep balls one will ever see. San Francisco’s secondary keep getting burned by those 15+ yard post routes. Most remember Matthew Stafford doing this twice in Week One on Sunday night football against Chicago. The middle of San Francisco’s defense could be considered a bit porous. Also, they have yielded 489 yards rushing in the past three weeks too.

The same can’t be said for the Rams’ defense, as they did slow down Tennessee’s attack that can strike quickly at times. The Titans managed less than 200 yards of total offense but 28 points in Week 9. The Los Angeles defense can be very intimidating but has allowed 50 points the past two weeks so there are points to be had.

Now, the odds for Los Angeles to score first is at -145. San Francisco’s odds to get on their opening drive are just +111. With the ball in Stafford’s hands early and how angry he was over last week’s loss, that is an oh my scenario. It is very likely that the Rams just play angry, score first, then play downhill all night. The 49ers are going to have to find a way to slow down that Rams offense. That may be a foolhardy task.

Our MNF Week 10 NFL Picks end with taking Los Angeles, then the over, and finally the score first prop.