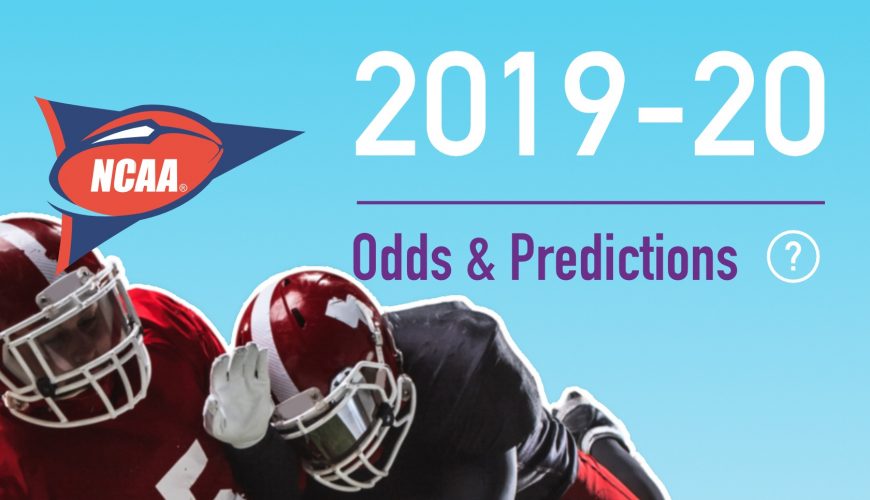 Let’s take a look at the NCAA football futures for the national championship:

The Crimson Tide, who lost Tua Tagovailoa with a dislocated right hip, are always in the national championship discussion. They have won the title fives times in the last 10 years and twice since the postseason tournament format started in 2014.

After a heartbreaking loss to LSU in Week 11 and the injury to Tagovailoa in Week 12, Alabama (+1200) is now on the outside looking in at the playoff scenario (Vegas odds college football provided by Bovada).

“I’m not second-guessing the fact I played (Tagovailoa),” head coach Nick Saban said after his team’s easy victory over Mississippi State. “What if we wouldn’t have played him and not won the game?”

Big Ten powerhouse Ohio State (+190) currently leads the college football odds for the Final Four. LSU (+250), the top-ranked team in the nation, is second. Defending national champions from Clemson (+275) are third, while Georgia (+700) is fourth in NCAAF Vegas odds.

A 13-member committee selects and seeds the four teams to take part in the College Football Playoff. The semifinals will be played on Saturday, Dec. 28, while the national championship is scheduled for Monday, Jan. 13 at the Mercedes-Benz Superdome in New Orleans, Louisiana.

Your Final Four odds are fixed if you make your bets now with top online sites like BetNow and GTBets, but the betting lines will change as the championship game approaches early in the new year.

Who’s In and Who’s Out

The fourth and final playoff spot remains up in the air with many one-loss teams still hoping for a shot at the championship.

No. 4 Georgia (10-1) and No. 5 Alabama (10-1) must win the SEC Championship to get into the College Football Playoff. For now, that title goes through LSU. The same is true in the Pac-12 as No. 7 Utah (10-1) must win out and capture the conference crown to even have a shot at the playoffs.

The Betting Trend Is Your Friend

After the first CFP season in 2014, the NCAAF odds have been dominated by two teams — the Clemson Tigers and Alabama Crimson Tide. One of these teams have won the title every year except the first tournament when Ohio State scored an upset as the No. 4 seed.

In three of the last four years, Clemson and Alabama have played each other in the championship. In the other year, the two college powerhouses met in the semifinals.

Here’s a look at the past results and how the teams were ranked:

In every championship so far, the No. 1-ranked team and the favorite in the NCAA football odds going into the playoffs has never won the national title.

Let’s take a look at the top three teams that have a combined record of 33-0 this season and try to pick the national champion for 2019-20:

The Buckeyes, who have beaten three ranked teams this season, must knock off No. 13 Michigan (9-2) and another top-ranked team in the Big Ten championship to reach the Final Four. The team from Columbus, Ohio, hasn’t lost a game since Oct. 20, 2018 — a loss which may have cost the Buckeyes a shot at the national title last year.

Ohio State, led by quarterback Justin Fields and defensive star Chase Young, have outscored their opponents by 428 points in 11 games this season. Fields may be one of the best athletes on the field, but to beat Ohio State opponents must force him to put the ball in the air.

The Tigers, who have beaten four ranked teams including Alabama this season, must outscore Texas A&M (7-4) and Georgia (10-1) in the SEC championship to reach the playoffs. The team from Baton Rouge, Louisiana, is 21-3 in the last two seasons, but the school hasn’t won a national championship since 2007.

LSU, led by Heisman candidate and quarterback Joe Burrow, have outscored their opponents by 276 points in 11 games, but it has faced the toughest schedule of the top three teams. The Tigers have won three games by a touchdown or less this season. They also have the toughest road to the national playoffs.

The Tigers, who have only played one ranked team this season, must beat South Carolina (4-7) to complete an undefeated regular season. The team from from Clemson, South Carolina, will play for the ACC title before heading back to the national playoffs.

Clemson has won 26 straight games since losing the national championship to Alabama on New Year’s Day in 2018.

The Tigers, led by arguably the best quarterback in the country in Trevor Lawrence, have outscored their opponents by 387 points in 11 games this season. Ever since a close one-point victory in September, the Tigers have reeled off six straight victories by 31 points or more.

VGB’s pick — Clemson (+275). Even as the defending national champions, the Tigers still seem to fly under the radar with most pundits. It’s hard to argue with their winning tradition.