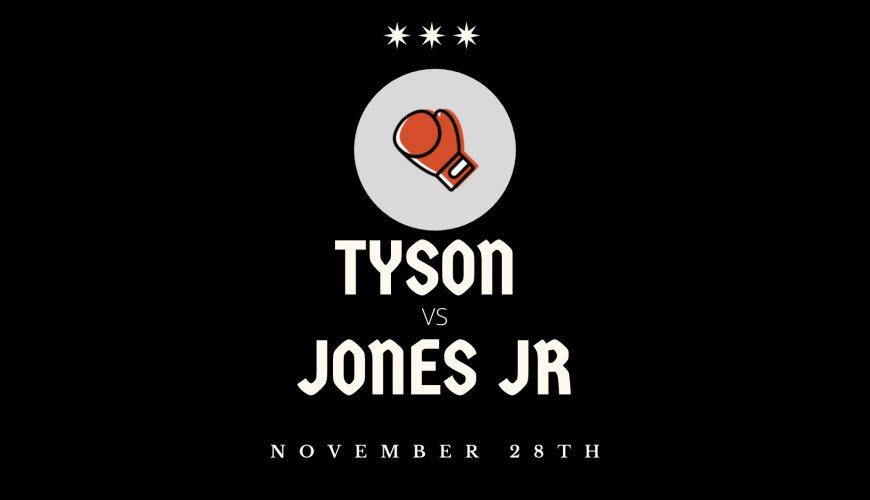 We understand that the match rules for this exhibition fight claim that there will be no winner declared. The majority of the sportsbooks removed the betting lines and have stated they will return the money to the bettors’ accounts. While all bets are off, there may be some prop bets released closed to the event.

If you didn’t think 2020 could get any more strange, leave it to the boxing world to mix things up quite a bit for us. That’s because come Nov. 28, legendary heavyweight fighter Mike Tyson will put the gloves on and get back in the ring. No, we’re not making that up. We will go through the best Mike Tyson vs Roy Jones Jr betting picks.

Tyson is now 54 years old, but videos of him have gone viral on social media because he’s still in such incredible shape and can still deliver haymakers that can knock anyone out in a split second. That’s bad news for Roy Jones Jr., a boxing legend himself, who will be taking on Tyson for this exhibition fight.

In this piece, we take a look at the Mike Tyson vs. Roy Jones Jr. odds and offer up our Mike Tyson-Roy Jones Jr picks for who we think will be the victor and when the showdown will end. Will it be Tyson or Jones to earn the win in this exciting boxing tilt?

While Tyson may be the headliner for this upcoming fight, Jones, 51, really is no slouch either. He himself is a former boxing champion and is ready to show all of his fans that he still has plenty left in the tank, and that he’s not afraid of Tyson whatsoever.

Heading into the Nov. 28 matchup, the Tyson vs. Jones odds are in the 54-year-old’s favor, as Tyson is listed as the favorite at -175 and Jones is the underdog at +145. If you ask us, it’s a no-brainer on which pick you should make here: go with Iron Mike as part of your Mike Tyson vs. Roy Jones Jr. picks. Not only is he in tremendous shape, but Tyson will also enter this fight having so much more to prove that Jones.

It was 15 years ago that we last saw Tyson enter the ring, as he faced washed-up heavyweight Kevin McBride in Washington DC. Tyson was the massive favorite in that one, but he looked sluggish from the start and ended up throwing in the towel at the end of the sixth round. He announced his retirement from boxing after that embarrassing showing, saying his heart just wasn’t in the sport any longer.

Since then, you can tell that performance has haunted Iron Mike. That’s not how his legendary career was supposed to end. Because of that, you can tell just how serious he’s taking this opportunity with Jones.

Despite both fighters being over 50 years old, and many out there writing this fight off as a joke, there’s plenty on the line here. Tyson can’t afford to have another embarrassing exit. We don’t think he will, which is why we’re doubling down on him to win.

Will Mike Tyson be able to knockout Roy Jones Jr?

As things stand, Mike Tyson has +120 odds to win this showdown by a knockout, while Jones’ odds are listed at +250. One thing to absolutely keep in mind for this fight is that with the two studs being up in age, their stamina is 100 percent going to be affected. With this one set to go eight rounds, imagine how tired they’re going to be by say round 5 or round 6.

These two aren’t in their late 20s or early 20s anymore. Now that they’re north of 50, having the energy to go toe-to-toe for a long time is simply out of the question. That’s why we think say by the fifth or sixth round, one Tyson punch is going to hit Jones where it hurts most. And with him gasping for air already because of conditioning, it will make it even more difficult for him to recover.

That’s why we’re expecting Tyson to not only win but to also finish the job with a knockout of Jones to record the victory in some style.

How many rounds will the Mike Tyson vs. Roy Jones Jr. fight last?

As we mentioned above, we think conditioning and stamina is going to play a big role in the outcome of this match. Whoever is in the best shape and can keep moving around/dodging punches and counter with some strikes will likely come out on top. Again, we think Tyson will have the advantage here over Jones Jr. despite being three years older.

But, how many rounds will this one last? The Vegas odds have set the over/under at 7.5. This is simply unbelievable. Does anyone really think this fight is going to go the distance? We’d be shocked if this thing even makes it to the seventh round.

Someone is going to land a big punch much earlier than that on Nov. 28, making it incredibly difficult for their opponent to catch his breath, get back on his feet and recover in time to keep the show going. Take the under as your Tyson-Jones pick in this case folks, and have plenty of confidence in doing so.

Leading up to the battle, you’ll be able to find even more Las Vegas picks for the Mike Tyson vs. Roy Jones Jr. fight. Prop bets are incredibly fun to place money on, which will make things on Nov. 28 even more interesting.

However, we’re fully expecting both fighters to behave, and for there not to be any wild incidents like we’ve seen in the past from Tyson. No one has forgotten him biting Evander Holyfield’s ear. Don’t expect something like that to happen against Jones.

What we do expect, though, is for Tyson is earn a hard-fought win in this exhibition match, and do so with a knockout well before the eighth round. Those are the picks we’ll be making for when the two boxing legends face-off inside the ring. Will you be joining us and get your wagers in through one of our Sportsbook partners? We recommend doing so as soon as possible.