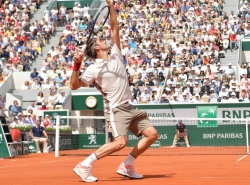 Tennis betting odds have always been popular, with so many tournaments throughout the year on the ATP Tour. So for those bettors looking to start making money on the tennis odds and futures tennis betting lines, you’ve come to the right place.

The latest tennis betting odds are available for a variety of tournaments. The next major tournament is the French Open. Here you’ll find the latest odds for the Men’s and Women’s championship. The odds were last updated on July 7, 2020:

45 years ago today Bjorn Borg took out Guillermo Vilas to win his 2nd straight French Open…..Borg maybe the most underrated athlete of his generation pic.twitter.com/esKedY0v51

While the vast majority of tennis fans tune in for the Grand Slams (US Open, Wimbledon, French Open, Australian Open), there is a variety of other great events during the year offering great betting opportunities.

The US Open marks the end of the tennis year. Played on a hard-court the tournament is the last of four Grand Slams and attracts the best players in the sport. The event takes place between August and September each year and a huge purse of close to $60 million.

Wimbledon, in London, hosts the third Grand Slam of the year. It’s a grass-court event and is steeped in tradition, with all the greats have won the tournament over the years. The unpredictability of English weather means the tournament is held at the height of the English summer between June and July.

The second Grand Slam of the year, the French Open is played on a claycourt surface. First founded in 1891 and otherwise known as the Roland-Garros, this Paris-based tournament is as popular as Wimbledon. There is just shy of $50 in prize money up for grabs. The tournament brings in the summer of tennis as it’s played in late May to early June.

The Canadian Open, otherwise known as the Rogers Cup, is one of the highlights of the tennis calendar outside of the tennis majors. The event takes place during the month of August and offers tennis fans something a little different than the majors. The event hosts a range of stars as well as lesser-known players, to battle it out for the $7 million in prize money.

Otherwise known as the World Cup of tennis, the Davis Cup offers a unique opportunity to enjoy the sport. With nations across the globe competing to be crowned the World Champions. The event originally started as a competition between the US and Britain, it has since evolved into a global spectacle and has become a highly competitive affair.

How Do You Read Tennis Odds

There are tennis lines for a variety of different tournaments, such as doubles, mixed doubles and singles, but let’s focus on singles for now.

Just like in sports like soccer or hockey, by the far, the most popular and common way to play tennis odds is by wagering on the money line – which basically constitutes betting on a player to win the match.

That’s all there is to it. Bettors can place bets on the first set or the overall game, but money lines are widely offered and accepted at a number of top-tier sportsbook providers. MyBookie is a great example, offering a broad range of tennis money line betting.

Another way to bet on tennis is through game spreads. The majority of tennis matches will feature big odds, so the spread is a way to even the playing field and ensure you maximize the value of your bet.

If Roger Federer is a -1, 100 favorite over Novak Djokovic in a 3-set match, the game spread might be around -4.5. This would mean that Federer would need to win five more games than Djokovic in the match (6-2, 6-3) to cover the spread.

This is another popular type of wager available and basically follows the same betting line as the game spread. The only difference is you are now betting on sets rather than games.

An example of this would be; If Venus Williams is favored in a match against Simona Halep, she may be available at -1.5 sets. Then if you bet on Williams at -1.5 sets and she wins in straight sets (6-0, 6-0) you win the bet. But, if Halep wins a set, you’d then lose.

Like we see in the vast majority mainstream betting lines, live tennis betting odds are probably the most popular.

The odds can change after every point, as the balance of the game shifts from one side to the next. This makes for a very exciting betting market. You can bet on who will win the next upcoming game.

The numerous factors that can swing the potential odds, meaning it’s a great sport to wager on – but you need to know what you’re doing before you place a bet. You can find the latest odds at Intertops, which offer a range of tennis odds and props.

While not the most popular tennis betting odds , these more exotic tennis lines come in the form of tennis props. These types of bets can come in many forms, one of the more common tennis prop bets is an exact score or whether or not there will be a tiebreak.

ATP futures odds and WTA odds are also quite common in tennis exotics and prop bets. Keep an eye out for tennis prop bets at your favorite sportsbook, or if you don’t know where to bet take a look at the latest tennis betting sites.

These are high-risk wagers that are generally only on offer at larger events or as futures for these tournaments. Bettors must shop around the various sportsbooks in order to find these types of odds.

Where to Bet on Tennis Odds

Below you can find a list of the top-tier tennis betting sites offering golf odds and where to wager online – we can help you find the best provider: