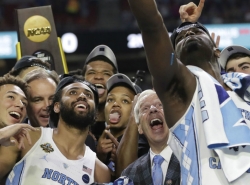 More than 350 Division I college basketball teams tip off the regular season in early November with the hopes of playing in the tournament in the spring.

It’s a long road filled with many ups and downs. It’s a road gamblers love to travel on as well. There are the perennial favorites which draw a lot of attention all the way down to the smaller schools that are hoping to make a big run.

With so many regular season games, bettors can get in on the action just about every day of the week until the tournament begins in March. Las Vegas sports books offer simple bets like the money line and over/under point totals. If you want to add a little more risk to your wagers, you can also play the point spread or prop bets.

If Vegas is out of the picture this winter, there are some online options to keep you in the game in Bovada, TopBet, and BetOnline.

The famous NCAA basketball tournament was created in 1939 by the National Association of Basketball Coaches, and was the idea of Ohio State University coach Harold Olsen. Currently, millions of Americans fill out a bracket, attempting to correctly predict the outcome of all 67 games in the event.

With 11 national titles, UCLA has the record for the most championships.

North Carolina rallied in the second half to beat Gonzaga 71-65 in the national championship game on April 3, 2017 in Glendale, Ariz. It was the Tarheels’ sixth title since the school program began in the 1923-24 season. Let’s use the results of that game to explain the betting terms below.

North Carolina (-115) vs. Gonzaga (-105) — Don’t get confused by the numbers following each team. This bet is as simple as picking the winner of the game. In our example, if you bet North Carolina on the money line, you have a winning ticket. The numbers after the team names affect the amount of profit you make on your bet.

North Carolina (-1.5) vs. Gonzaga (+1.5) — Oddsmakers in our example for the final game listed North Carolina as the favorite at -1.5 points. So, to win this bet against the spread, the Tarheels have to win by two or more points. The Bulldogs either have to win the game outright or lose by one point for those that bet on Gonzaga to score. Since North Carolina won by six points, it “covered” the spread.

College Basketball Over Under

Here’s another simple wager. Oddsmakers pick a line on the point total for the game, and bettors can choose whether they think more (over) or less (under) points will be scored. In our example, the line was set at 156. The winning ticket was cashed by those that bet the “under,” since the final score (71+65=136) was less than the betting line of 156.

A futures bet is an event that concludes at a later time. Fans are betting on their favorite college basketball team now, even though the championship isn’t decided until April. Futures are typically offered right until the final event. However, the odds will change depending on the success of a particular team at the time of your bet.

How many points will a certain player score in the game? What number seed will win the national championship? These are prop bets. Or, how about this one: Will a No. 16 seed beat a No. 1 in this year’s tournament? That’s never happened in the history of the event, although eight No. 15s have knocked off No. 2 seeds. Bettors choose which side of the outcome they want to place their money.