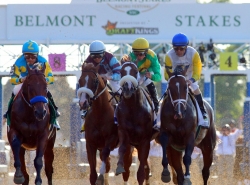 This is the New York City marathon of Triple Crown races.

The Belmont Stakes — the third and final stop after the Kentucky Derby and Preakness Stakes — is the longest of the three races at a gruelling 1 1/2 miles. It is held annually five weeks after the first Saturday in May at Belmont Park in Elmont, N.Y.

Only 12 horses in the history of thoroughbred racing have completed this circuit as a champion in all three races. American Pharoah won the 2015 Belmont to become the first horse to capture the Triple Crown in 37 years.

First held in 1867, the third jewel of the Triple Crown is also called the Test of the Champion. Secretariat, who holds the stakes record in all three races, completed one of the most remarkable performances in the history of the sport when the three-year-old superstar won the 1973 Belmont by an amazing 31 lengths in 2:24. No horse has ever come close to his mark.

Thirty-five horses have reached the Belmont with victories in the Kentucky Derby and Preakness. Twelve have joined the exclusive club, while 23 have failed the Test of the Champion.

Betting On The Belmont Stakes

The Belmont does not draw the betting handle like the Derby since the field is much smaller. The number of starters is restricted to 12 horses, although fewer normally enter the starting gate.

Some racing fans will buy many $2 win tickets on the possible Triple Crown winner as souvenirs.

Belmont Park isn’t the only site for wagering. There are many options available like off-track venues throughout the U.S., Las Vegas sports books — like the Wynn and Venetian — or online gaming sites such as Bovada, TopBet or Betonline.

These venues all offer similar options for wagering on this historic race.

How To Pick A Winner for the Belmont

The program for the Belmont Stakes will list the horses from No. 1 on out based on the post position draw earlier in the week. Many of these programs will be saved as souvenirs if a horse makes history and captures the Triple Crown.

Beside each horse’s name are the pedigree, owner, breeder, trainer and jockey. The information also includes past performance charts, won/loss records and career earnings.

Some important angles to look for when trying to pick the winner include: top jockey, top trainer, recent performances, post position and track condition. The colt’s history at Belmont Park should also be a consideration.

But the one variable which stands out is if the horse can “get the distance.” These equine athletes never race at this distance, never mind as three-year-olds. It will take some homework, starting with their pedigree, to figure out if 12 furlongs is just too demanding or not. “Closers” tend to like the longer routes. “Front-runners” tend to prefer shorter distances.

Belmont Betting Trends From The Past

The most recent editions of the Belmont have seen some attractive payouts. Outside of American Pharoah’s Triple Crown victory in 2015, Belmont winners have paid in the double-digits in the last five years.

The Belmont ranks right in the middle of the three legs of the Triple Crown as far as a favorite winning the race — 62/149 (41.6%). And only one betting favorite has won since 2005.