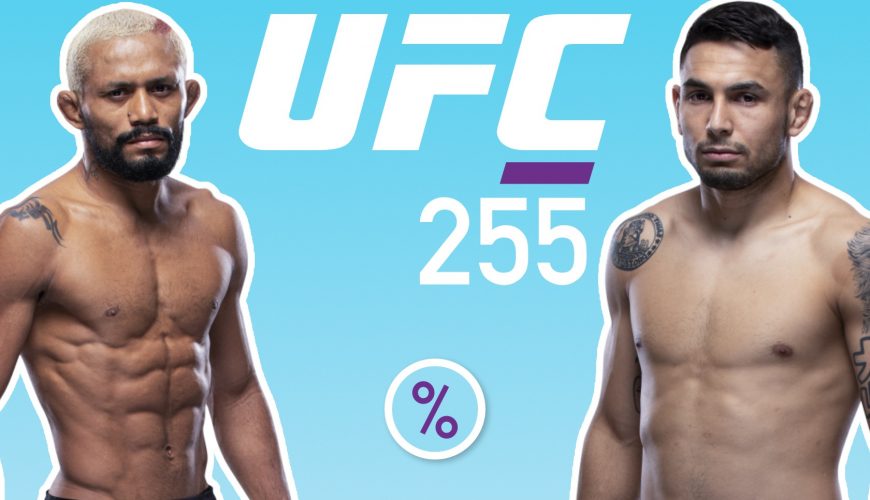 Folks, the wait is almost over, as UFC 255 is officially scheduled for Nov. 21 for all of you MMA fans to enjoy. In what’s expected to be a thrilling event over in Las Vegas, the exciting event will feature several bouts that everyone won’t want to miss.

The list of course includes the featured fight scheduled between Deiveson Figueiredo and Alex Perez, which will have the Flyweight Championship on the line. Will Figueiredo be able to defend his title? We take a look at that and more in this UFC 255 picks preview of the event.

Deiveson Figueiredo vs. Alex Perez Picks for the Flyweight Championship

The expectation is he’ll once again be able to come away with a win. However, things are certainly easier said than done, despite Figueiredo holding the much stronger odds.

At the same time, Perez can’t be slept on either entering this fight. He may be the underdog, but we’ve seen some wild upsets throughout the UFC this year and no one should ever be ruled out leading to a bout taking place.

While Perez certainly has a shot to win this one on what should be an entertaining bout, we are going to stick with Figueiredo to come away with the victory when the two powers face off. We also think Figueiredo will be able to record his victory in the first round, doing so with a vicious knockout punch. This prediction is no question among our best UFC 255 picks.

Valentina Shevchenko is expected to have her way with Jennifer Maia

The other championship bout scheduled for Nov. 21 will come on the women’s side, with Valentina Shevchenko all set to defend her crown going up against Jennifer Maia. To say the smart money going on Shevchenko would be a massive understatement, as the Woman’s Flyweight champ has an astounding -1200 odds to come away with a win.

For Maia, she’s been given little to no hope in winning this fight, as her Las Vegas Odds have already been listed at a lowly +675. Should you bet on Maia and hit, you’d obviously see a monster payout. However, that payout will be so high because the strong belief is she has no chance of winning.

If you’re going to bet on the fight, go with Shevchenko, as all the UFC 255 predictions seemingly have her dominating. The money you’ll win won’t be too high because of the odds, but it’d be the smartest move you could make for this particular showdown.

In another intriguing matchup, we’ll see Brandon Royval going up against Brandon Moreno in UFC 255. In terms of the UFC 255 picks, going with Moreno will be a no-brainer for UFC fans out there. In fact, this should be considered one of your UFC 255 locks in terms of wagers.

Moreno has -227 odds to come out on top of this bout, while Royval, the underdog, has been listed at +160. We like Moreno for this one because of his knockout potential. While Royval can also surprise his opponents with great power, Moreno will prove to be too much to handle. We also believe Moreno can get this done in the first round.

While the UFC 255 odds are yet to be released for the round-by-round picks, go with Moreno to finish the job via a first-round TKO on Nov. 1. This one should be over early for the anticipated Saturday night showdown between these two studs. Moreno will also be fighting after not getting a title shot for UFC 255. He’s incredibly motivated to show the world why he’s one of the best fighters in his weight class. That’s bad news for Royval.

To start things off on Nov. 21 with the main card, UFC 255 fans can’t wait to see Mauricio Rua and Paul Craig get things going. Similar to the Royval-Moreno tilt, this one is expected to be a see-saw battle from start to finish, with the Vegas Picks giving Craig the advantage.

Craig holds -225 odds, while Rua will enter this bout at +165. Believe it or not, of all the picks, this is the one where we’re going to go with an upset to take place. Despite being the underdog, Rua has loads of experience as a 38-year-old fighter and has a 27-11-1 record to his name.

Craig is 13-4-1 and six years younger at 32 years of age. In this light heavyweight battle, Rua and his Brazilian style will look to stifle the UK’s Craig. Will Rua be able to get that job done? While the odds may be against him, we think the veteran will stun the UFC 255 card and come away with a second-round victory.

UFC 255 parlay that could result in a big win

For UFC 255, a parlay we think has the potential to result in a big win would be betting on Figueiredo, Shevchenko, and Moreno all coming away with victories. Should you play a three-way parlay in this case, your payout would be more than 2-to-1. Feeling lucky?

Well, we’re feeling confident in our picks. Again, it’ll be easier said than done, but these three fighters most certainly have what it takes to come away with wins for you come Nov. 21.