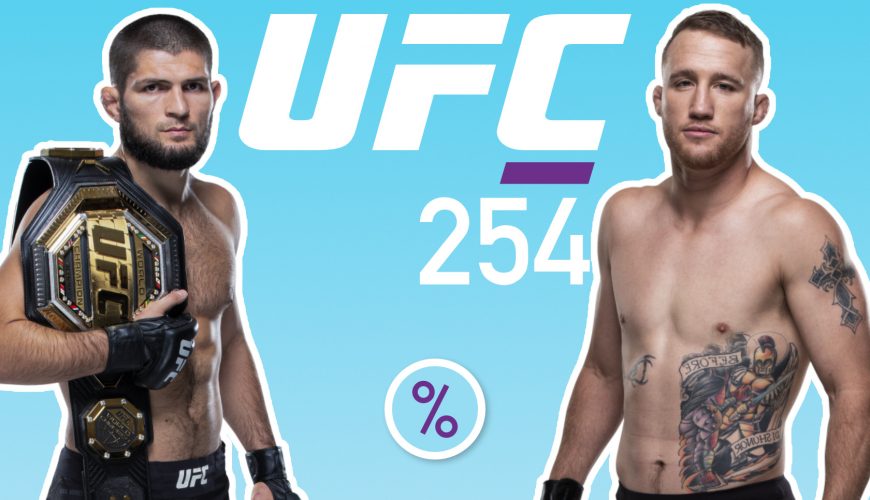 It’s the one we’ve all been waiting for in the MMA world, as Khabib Nurmagomedov will face the All-American Justin Gaethje for the lightweight title fight. The challenger Gaethje will be looking to break the standing unbeaten MMA record held by the champ of 28-0.

Gaethje overcame Tony Ferguson in an unlikely win in his previous bout setting up this fight. Gaethje beat Ferguson in convincing fashion, who was due to face the champ after that fight.

While Khabib is still the most dominant force in the UFC, Gaethje does pose a new threat – an unconventional fighter, with real knockout power. Gaethje has 4 wins in his last 5 fights and is seemingly unphased by the prospect of fighting the undefeated champ, even though he’s destroyed everyone he’s faced.

We feel this fight is likely to be closer than what the Tony Ferguson bout would have been. Gaethje can take a punch and is happy to go toe-to-toe with his opponents. It’s going to be a hell of a fight on Saturday, October 24, 2020, on Fight Island, Abu Dhabi.

We are fast approaching the day of the event, so as we get closer to the big night in the Middle East we’re likely to see the odds changing. As well as that, it’s worth bearing in mind that the fighters could become injured during camp or get infected with the novel virus COVID-19 and be forced to step away from the event.

However, as soon as this becomes clear, we’ll be sure to update this page so our readers don’t miss out on anything. We’ll cover all the best fights scheduled for UFC 254 as well as providing picks and predictions for the event.

Khabib has become a global superstar in the last few years and a household name for many in the sport of MMA. He comes into this one looking like the clear favorite to win with all top-tier betting sites.

Gaethje has risen to the top quickly, which brings with it a lot of pressure. However, the Arizona man seems to not be bothered by the prospect of fighting for the title and looks like he’s relishing the limelight.

Khabib doesn’t seem to have had any trouble with any of the title contenders so far. Every person who’s stepped into the Octagon with the Russian has been destroyed.

Gaethje does offer something new, as he has an unpredictable striking game and could easily catch the champ off guard. But if that doesn’t happen, expect to see Khabib retain his title.

Take Khabib to win by TKO/KO.

Jared Cannonier to run through Robert “The Reaper” Whittaker

This is a very important fight for Whittaker, as he lost in embarrassing fashion to the reigning Middleweight champ Israel Adesanya in his last bout. If he has any hope of reclaiming that belt back, he’ll have to stop Cannonier here.

It’s worth remembering that Whittaker is a force inside the Octagon. While he was beaten by Adesanya, before that he was the champ and possess the ability to beat anyone at Middleweight.

Cannonier has a record of 13-4 and at 36 years old is very much in the prime of his career. Cannonier was called out by Adesanya after he beat Paulo Costa at UFC 253, so there’s another incentive for him to win this one and get his title shot.

Cannonier has a lethal power in his striking and a great range of kicks and punches in his arsenal. He seems to be improving all the time and will be a real test for the former champ. We expect top UFC betting sites to back Whittaker in the odds, but we back the underdog.

Pick Cannonier to win by TKO.

Islam Makhachev hasn’t lost a fight since 2015, looking to make it 7 wins in his last 7 fights. The Russian has shown to be a real danger in the lightweight category, which could mean he’d face his best friend Khabib one day.

His opponent, Rafael dos Anjos has been struggling recently and will really have to pull this one out of the bag if he is to reignite his UFC career. We expect the UFC odds to favor the Russian.

Dos Anjos is a dangerous fighter, but with just one win in his last five fights, it’s going to be difficult for him to stop the relentless pace and ability of Makhachev.

Expect a win for Makhachev.