Let’s take a look at the UFC 246 Las Vegas odds for the main event, according to MyBookie:

The comeback is officially in high gear. Conor McGregor, who has made more headlines for his actions outside of the cage than inside it over the past few years, is making his return to the Octagon for the first time since October 2018 in the title bout for UFC 246.

Notorious (-235) is the overwhelming favorite in the welterweight main event to be held on Saturday, January 18 at T-Mobile Arena on the famous Las Vegas Strip (UFC 246 betting lines provided by Bovada). The former two-division champion’s opponent — Donald Cerrone (+185) — has lost his last two fights by knockout.

“He has been training hard, he has been getting ready for this moment,” UFC president Dana White said of McGregor (21-4).

“The problem is … when a guy has 100 and something million dollars, he’s young, he’s famous and now he is unbelievably rich, it is hard to keep the train on the tracks for some guys. That has definitely been Conor McGregor.”

There are five bouts on the main card, including a women’s bantamweight rematch between former champion Holly Holm (-165) and former title challenger Raquel Pennington (+135). 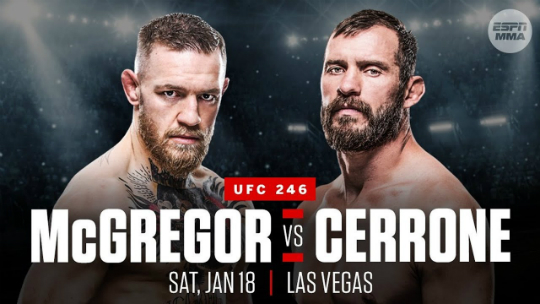 There are few wagering options available at land-based sportsbooks on the Strip for UFC odds other than the money line. If bettors are looking to play the props for UFC 246, it’s best to take your action online to sites like BetNow and GTBets.

Here are some of the UFC 246 odds that are available on those sites for the main event between McGregor and Cerrone:

VGB’s pick — (No). The fight will not go the distance. Cerrone will be knocked out for the third straight time.

McGregor has set his sights high in 2020 with the goal of three UFC fights, highlighted at the end of the year with a rematch against undefeated lightweight king Khabib Nurmagomedov.

He’s a long way from that mountaintop. And he has to take care of business first with Cerrone (36-13), who holds the UFC record for most wins, finishes and post-fight bonuses. Cowboy, who is a huge UFC fan favorite, had won three in a row before the two losses to end 2019.

“(I’m expecting) the same hungry kid there’s always been,” Cerrone said of McGregor. “He’s coming to knock my head off. There’s a lot weighing on this fight so I’m probably going to get the best Conor McGregor out there.”

McGregor is 2-2 in his last four fights, dating back to March 2016, but he had won 15 straight before that, including four title bouts.

Vegas Betting’s pick — McGregor (-235). A loss would be devastating to McGregor’s career path in the UFC. He needs to be ready to rumble.