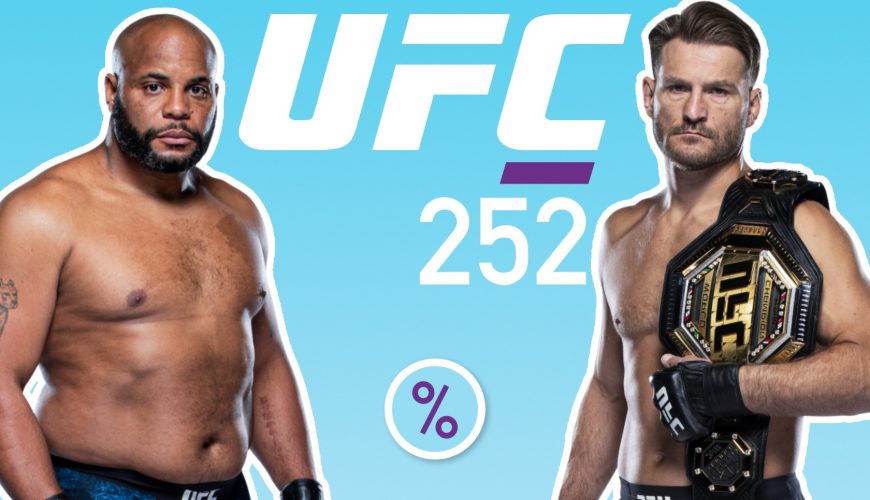 The next installment of the UFC will feature the third in a head-to-head series between two of the greatest heavyweights in the history of the sport, as full-time fireman Stipe Miocic defends his title for the second time against former heavyweight champion Daniel “DC” Cormier.

With the event due to take place on August 15, 2020, the odds are already available. The odds for UFC 252 are subject to change and it’s well worth checking back with us to ensure you’ve got the latest market rates. This page was last updated on August 10, 2020:

While the date for the event is confirmed, Dana White has yet to confirm the location for the event. UFC fans from around the world eagerly await the event in August, as the third in the series looks to finally have arrived.

The series stands as 1-1 between these two, with Cormier winning the first and Stipe the second with a killer knockout punch.DC was caught with a heavy hit and followed up by a rain of strikes from Miocic to finish him off. It was a huge fight and one that MMA fans won’t forget.

With a handful of other great fights on the cards, there’s a lot to play for as a bettor. We’ll delve deeper into the event, fights, and provide you with some picks from our in-house UFC experts. Let’s get stuck in.

With the event just a month away, it’s worth checking back with this page as the odds we’re looking at today is the initial release. The fighters will change shape and with glimpses of the fighters training, the oddsmakers will change things up. Below we’ll display the full card, as well as some picks from our experts.

Two of the greats of the sport and true MMA heroes, this fight will be remembered through the ages. Initial UFC Vegas odds have them at evens, both posted at -110 on UFC betting sites. It’s going to be a close contest, with both fighters looking for a spot in the UFC Hall of Fame.

Daniel “DC” Cormier will come into this one having lost both his titles, but is never far away from the sport and is regularly seen training with pound-for-pound UFC Champ Khabib.

There is a lot on the line for this one. Yes, Miocic is defending his title and Cormier will be hoping to feel the weight of the belt around his waist one more time. Moreover, it’s the third in a trilogy of fights between these two, they will be pumped and if there happens to be an audience there – the place will be lit.

Each fighter has their own unique skill set, but we can imagine this being a standup slugfest with Cormier at a disadvantage due to his reach and range of striking. However, once he’s in close it’ll be tough for the Croatian-American champ.

Our expert pick says to go with the Champ – Miocic will retain his title.

The man from Suriname lost out in savage fashion to the unstoppable Francis Ngannou in his last fight. However, we feel he was overrun and didn’t expect the French-Cameroon giant to come out the blocks as he did.

Look to see Rozenstruik putting up more of a fight this time and put on a show. He’s got a great range of striking and lethal knockout power.

Dos Santos is a veteran of the fight game and will be very ready for this one. At 36, he’s had a wonderful career in the sport and the UFC owes a lot to him for what he’s given over the years.

The Brazilian will be coming into this one looking to snap a 2-game losing streak. He’s been active throughout his career, but he’s moving towards the twilight of his career and will be hungry to get the win here.

Dos Santos is a smart fighter and has a great range of striking for a big man. He is a better fighter in terms of fighting attributes outright. But Rozenstruik is hungry and is a new face in the heavyweight fight game.

The experts at VegasBetting see Dos Santos getting dropped by Rozenstruik in the first.

Sugar Sean O’Malley is lighting up the Bantamweight division, having not lost a fight since 2013 he’s built quite the following. A unique fighter, with one of the most eclectic fighting styles in the game. He comes into the fight as the clear favorite at -230.

O’Malley is very active on social media and has a close relationship with his fans. He’s an odd-looking character, with multi-colored hair and an advocate of weed-smoking and fighting – he’s always causing a scene.

Marlon Vera is an experienced fighter, representing Ecuador and coming in as the underdog at +180 with major online betting sites. Vera’s is clearly the inferior fighter.

However, O’Malley is really starting to feel himself and could become overconfident, which would play nicely into the hands of Vera.

At 28 years old, the Ecuadorian will want to make his mark on the UFC and work his way up the rankings to push for a title fight.

Our in-house experts believe it’ll be a one-sided affair – Sugar Sean O’Malley to win by KO.

See below the top online betting sites where you can wager and choose the best one for you. Remember that you are most of the time eligible to claim a better bonus when you fund your account using bitcoin.