The Calgary Flames are fourth in the Pacific Division and just a few points out of one of two wild-card spots in the Western Conference, but some lacklustre play of late is not helping their cause at all.

The Flames have lost four of their last six games, including their last two at home. They play two road games in two nights before they head home to the Scotiabank Saddledome for an afternoon contest on Saturday.

This is just the second time this season that the Flames (30-21-9) will square off against the division leaders. Vegas won on the road in Calgary 4-2 on Jan. 30. The Golden Knights (39-16-4) are -190 favorites in their sixth of a seven-game homestand on Wednesday (odds provided by TopBet).

Vegas is 4-2 in those games at T-Mobile Arena after suffering a rare loss at home on Monday night. The Anaheim Ducks blanked the Golden Knights 2-0 — the second time this season Vegas failed to score a goal in a home game.

The Flames also lost on Monday as the Boston Bruins scored in overtime for a 2-1 victory. Matthew Tkachuk scored for lone goal for Calgary. It was his 22nd of the season and five behind the team’s leading goal scorer in Sean Monahan (27).

Johnny Gaudreau is third in the NHL and the Flames’ leading scorer with 19 goals and 50 assists for 69 points. His assist total is third best in the league behind Philadelphia’s Jakub Voracek (54) and Winnipeg’s Blake Wheeler (51).

Mike Smith is the leading goaltender for the Flames. Smith (23-16-6) has a 2.53 goals against average, but he is listed as doubtful for this matchup.

The Golden Knights, who have been favored in six straight games, have four 20-goal scorers and four players with more than 50 points. 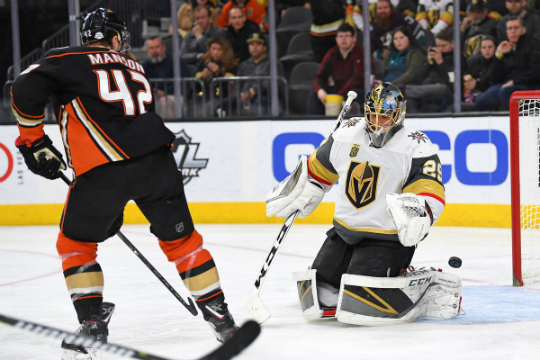 Here’s the conundrum with this game for gamblers: The Flames have a much better record on the road (17-7-5) this season than they do at home (13-14-4). They have earned 39 points on the road and just 30 at the Saddledome for a nine-point differential. Next closest in the league are the Ducks who have a three-point difference.

It’s difficult to bet on any road team. The home crowd, the 12th man — whatever you want to call them — they always seem to give the home team a bit of a boost. But that’s obviously not true when the Flames come to town.

These two division rivals will meet four times this season. Even though the Golden Knights only have five losses at home in their first season in the NHL, they have lost three of their last seven at T-Mobile.

If the Flames want to make a run at the playoffs, Las Vegas is a great place to start, but a backup goalie needs to come up big against the Golden Knights.