The Golden Knights are heading home and back to the warm weather of Las Vegas after a successful five-game road trip in the eastern time zone.

Ryan Carpenter scored with less than three minutes to play on Monday to lift the Pacific Division leaders past the Philadelphia Flyers 3-2.

The Golden Knights — who went 4-1 on the trip — also beat the New Jersey Devils, Detroit Red Wings and Buffalo Sabres. Their only loss came to the Columbus Blue Jackets. Vegas now plays eight of its next 10 games at T-Mobile Arena, starting with the Devils on Wednesday night.

The Golden Knights have been favored in 16 straight games, winning 10 of them (odds provided by Bovada). This is their second and last regular season meeting with the Devils, who the Golden Knights beat 3-2 on March 4 at the Prudential Center. 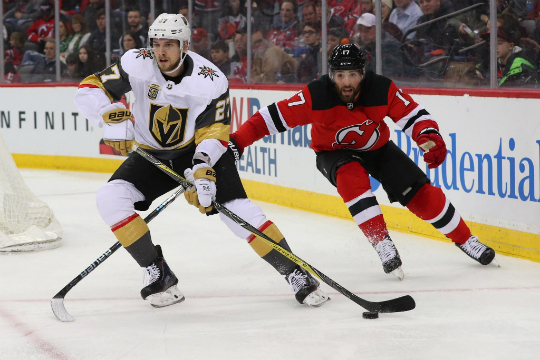 The 13-year veteran, who earned his first NHL win on Oct. 18, 2003, became the third active goalie to reach the milestone, joining Roberto Luongo of the Florida Panthers and Henrik Lundqvist of the New York Rangers.

“He’s a better person than goaltender,” head coach Gerard Gallant told the media after Monday’s victory, “and that says a lot.”

The Devils, who snapped Nashville’s 10-game winning streak last week, currently cling to the second of two wild card spots in the Eastern Conference. They are 4-6 in their last 10 games and 17-12-5 away from home.

All-star Taylor Hall is the leading scorer for New Jersey with 30 goals and 44 assists for 74 points. He has 31 more points than the next closest player on the team in Nico Hischier (14-29-43).

My Team's Next MatchVegas Golden Knights

After a mediocre homestand in February, the Golden Knights have found their winning ways on the recent road trip. They should handle the Devils at T-Mobile with the NHL playoffs last than a month away.