The Vegas Golden Knights’ stranglehold on the Pacific Division lead looks vulnerable for the first time this year.

The expansion team that has set numerous NHL records this season lost its fourth consecutive home game on Friday at T-Mobile Arena. The Minnesota Wild swept their three-game season series against the Golden Knights with a 4-2 victory.

Vegas looks to snap the losing skid Sunday afternoon against the Calgary Flames, who are a few points out of a wild card spot in the Western Conference with 10 games remaining in the regular season. The Golden Knights are favored (-160) for the 19th game in a row (odds provided by Bovada). They are 10-8 in that 18-game stretch.

Vegas hasn’t won a home game since the Golden Knights beat the Vancouver Canucks 6-3 on Feb.23. They are 4-6 in the last 10 games with their lead over the San Jose Sharks and Los Angeles Kings shrinking quickly in the Pacific.

“I don’t care who we’re playing, it’s time to get back to winning,” Vegas coach Gerard Gallant told the media after Friday’s loss to Minnesota. “We’ve had a great home record all year long. We’ve got to make sure we’re the hardest-working team on Sunday and find a way to win.” 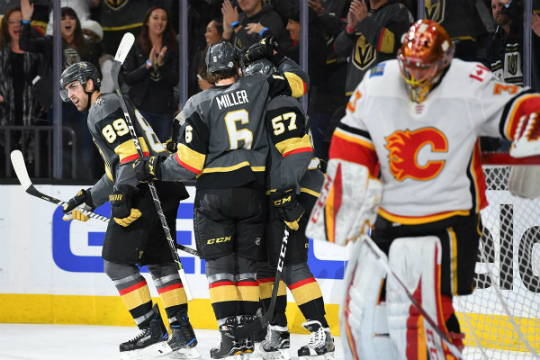 The Golden Knights are now 24-9-2 at T-Mobile Arena, which is located on the Las Vegas Strip between iconic resorts Monte Carlo and New York New York.

This is the third time this season that Vegas will face off against Calgary, which is 4-5-1 in its last 10 but an impressive 20-10-6 on the road. The Flames (+140) have been favored in their last five games, winning three of them. They have lost all five of their previous matchups as an underdog.

David Perron had two assists Friday to gain a share of the lead in offense for Vegas, which is second in the league in scoring. The 10-year veteran has 16 goals and 49 assists for 65 points, the same total as Jonathan Marchessault, who has 22 goals and 43 assists.

Johnny Gaudreau is having an excellent fourth year for the Flames. He’s seventh in the league in scoring with 23 goals and 58 assists for 81 points. He’s far ahead of Sean Monahan (30-33-63) for the team lead by 18 points. Calgary is 20th out of 31 teams in the NHL in goals scored.

This is a must-win game for the Flames, who have one of the best records on the road in the league.

They play four of their last five regular season games at home. The Golden Knights finish the season on a three-game road trip with their last game at Calgary on April 7.

The under goal total has dominated the last 10 games for the Golden Knights at 7-3. However, the total has been over in both meetings with the Flames this season.