The betting line-favored Pacific Division which has the top two leading scorers in the league’s regular season heading into the 65th NHL All-Star Game on Saturday, Jan. 25 at Enterprise Center in St. Louis.

This will be the fifth consecutive all-star game that uses a four-team, three-on-three, single-elimination format, with one team representing each of the league’s four divisions.

Edmonton Oilers captain Connor McDavid (74 points) and teammate Leon Draisaitl (73 points) hope to lift the Pacific Division (+300) to its third title in five mid-season classics in this format (NHL All-Star Game odds provided by Bovada). The Western squad won the event in 2016 and 2018.

The Metropolitan Division (+350) will play without Washington Capitals captain Alexander Ovechkin, who decided to skip the exhibition for the second straight year despite winning the fan vote. The Metros won the all-star title last year.

“I have to listen to my body,” the 34-year-old veteran said. “I have to get ready for the second half of the year.”

The Atlantic Division (+350) and Central Division (+500) round out the betting lines. 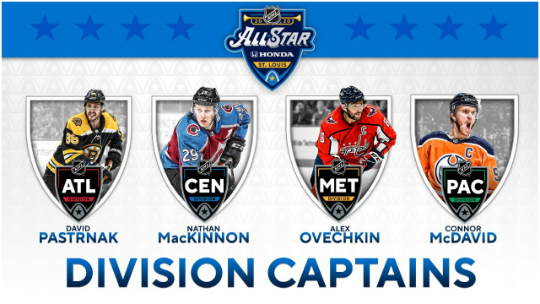 The 2020 installment of the all-star game will come from the home of the Stanley Cup champions as the St. Louis Blues play host to the event for the third time in the team’s history.

Each all-star team in the three-on-three format consists of 11 players, including two goaltenders.

The Atlantic, which is 2-4 in the first four all-star games in this format, is led by the league’s leading goal scorer in David Pastrnak (36) of the Boston Bruins and seven-time all-star Shea Weber of the Montreal Canadiens. Five of the 11 players on the roster are first-time stars.

The Metro, which is 4-2 in the new format, is led by its captain Kris Letang, who is a six-time all-star defenseman for the Pittsburgh Penguins. This squad will also be counting on production out of two-time all-star Artemiy Panarin, who is third in the league in scoring for the New York Rangers.

The Central, which is 1-4 and finally scored its first victory last year in this competition, is led by captain Nathan MacKinnon of the Colorado Avalanche. He is joined by a veteran lineup that includes Patrick Kane (Chicago Blackhawks), Tyler Seguin (Dallas Stars), and Eric Staal (Minnesota Wild).

The Pacific, with five wins in seven three-on-three games, is the most successful division in this all-star format. Four-time all-star Connor McDavid leads a unit that includes six rookie all-star players, including both goalies. Eight of the 11 players on this unit are from Canadian teams.

VGB’s pick — Central (+500). The Central and Atlantic have never won this unique all-star competition. It’s time for that to change for the Central, which plays in front of a hometown crowd in St. Louis in the 2020 NHL All-Star Game.