The Minnesota Vikings are two victories away from becoming the first team in NFL history to play a home game in the Super Bowl.

The Vikings (13-3), who have won three straight regular season games coming into the postseason, play the last of four conference semifinals on Sunday when they host the New Orleans Saints (12-5) at U.S. Bank Stadium. Minnesota is favored by four points to collect their first playoff win since 2010 (odds provided by bovada.lv).

Super Bowl LII will be held on Feb. 4 in Minneapolis — the second time the league final will be decided in Minnesota. Washington won its third championship title in 1992 when the Redskins beat the Buffalo Bills 37-24.

The Vikings have been on the mark all season. They started the year off 2-2 before winning 11 of their last 12 regular season games. The only loss in that stretch was on the road in Carolina as the Panthers beat them by a touchdown 31-24.

The Saints had a similar run in 2017. They lost their first two starts before going 11-3 in their final 14 games. Four of their five losses came on the road, which is a concern playing in a noisy indoor stadium this weekend.

Why New Orleans will win:

Why Minnesota will win:

New Orleans is hoping Week 1 was not a preview for this matchup as the Vikings downed the Saints 29-19 in one of two Monday Night Football games. Sam Bradford and rookie Dalvin Cook had big games for Minnesota.

If the Saints are looking for any sign to beat the Vikings, there is an obvious one: Hold the lead at halftime.

The Vikings are 12-1 this season when they lead after 30 minutes. The Lions trailed 7-3 in their Week 4 game before scoring 11 unanswered points in the second half to win 14-7. Other than that one game, no other team rallied to beat the Vikings this season.

However, when Minnesota trails at the half, they are 1-2 this year. It’s incredible to note that the winless Cleveland Browns were one of three teams to be leading the Vikings at halftime this season. Minnesota blew that game wide open in the second half and won 33-16. It was the only game where the Vikings rallied for a win on the entire schedule. New Orleans, take note. 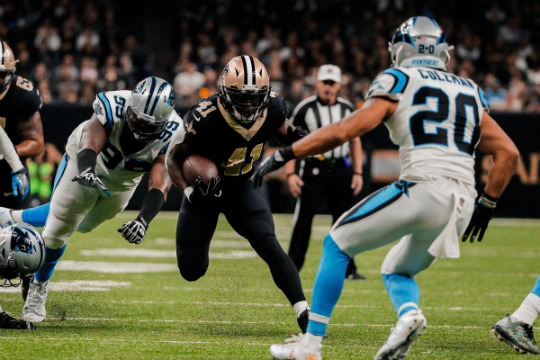 But that will be easier said than done for the Saints, considering the Vikings have the best defense in the league. They give up less than 16 points a game and hold the opposition under 280 yards in total offense. They are also +5 in the turnover ratio.

Drew Brees and his excellent supporting cast of running backs Alvin Kamara, Mark Ingram and receiver Michael Thomas need to put up some big numbers to advance to the NFC final next weekend.

While the Vikings’ defense tends to get all the attention, Case Keenum and his crew have also had an excellent year. Latavius Murray led the team in rushing with 842 yards and eight touchdowns, while receivers Adam Thielen, Stefon Diggs and tight end Kyle Rudolph combined for 212 catches and 20 TDs.

One last stat to remember: This is Keenum’s first playoff game. It’s the 13th for Brees — a future hall of famer.